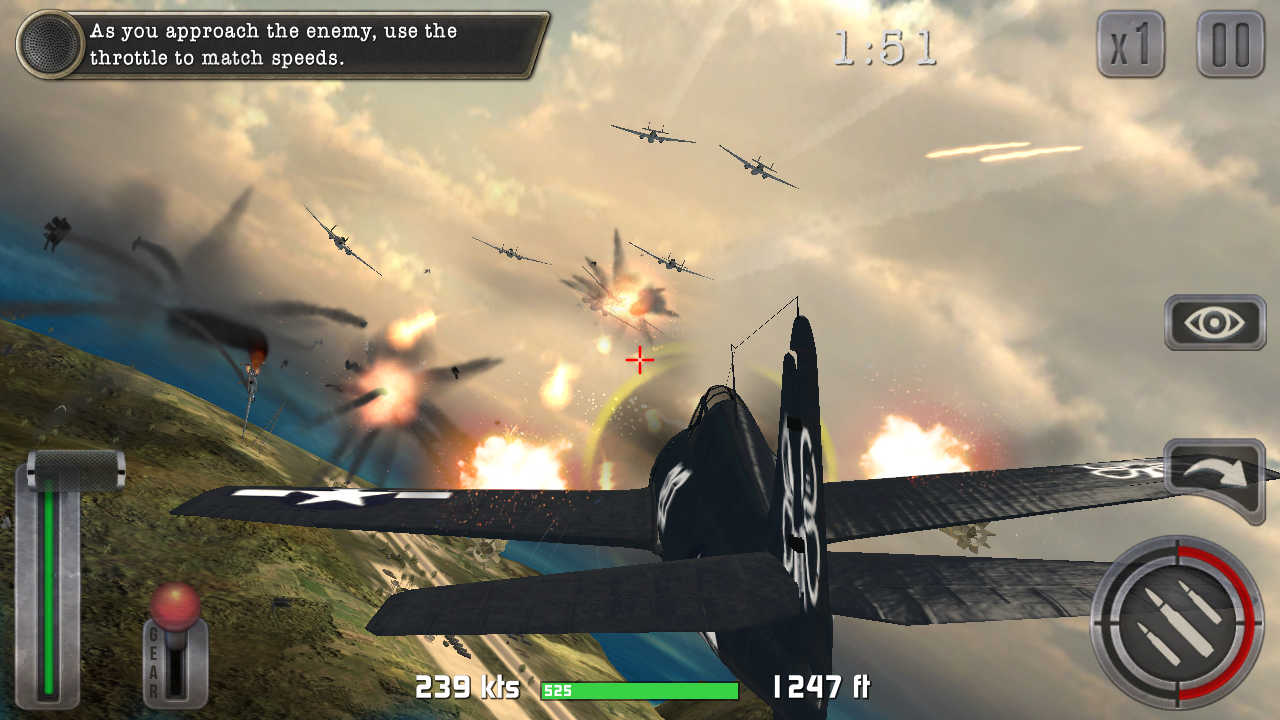 Take to the skies and pound the ground in a mix of high-flying and heavy-rolling World War II combat games.

This article appears in: August 2018

If you hop on the Google Play or Apple Store and search for any variation of “air combat,” you’re going to end up with a deluge of middling results. Such is the way of the bloated app stores of today, and that’s why it helps to know a few extra keywords that will take you to more interesting options. One of those is Air Combat Pilot: WW2 Pacific, which is a pretty decent little flight sim packed inside the shell of mobile design.

Developed by the Chicago-based eV Interactive, LLC, Air Combat Pilot: WW2 Pacific lets players (eventually) control more than a dozen aircraft from the period, starting with the T-6 Texan and moving all the way up to the F4F Hellcat, F4U Corsair, and other high-performance options. Once you earn enough money in missions—or through the investment of your own funds, if you’re so inclined—you can purchase upgrades like extra armor, beefed-up engines, and new guns, rockets, bombs, and torpedoes, among other essential items. Thankfully, you’re not going to need much more than the starter aircraft at first, at least not until you get deeper into the actual sorties. 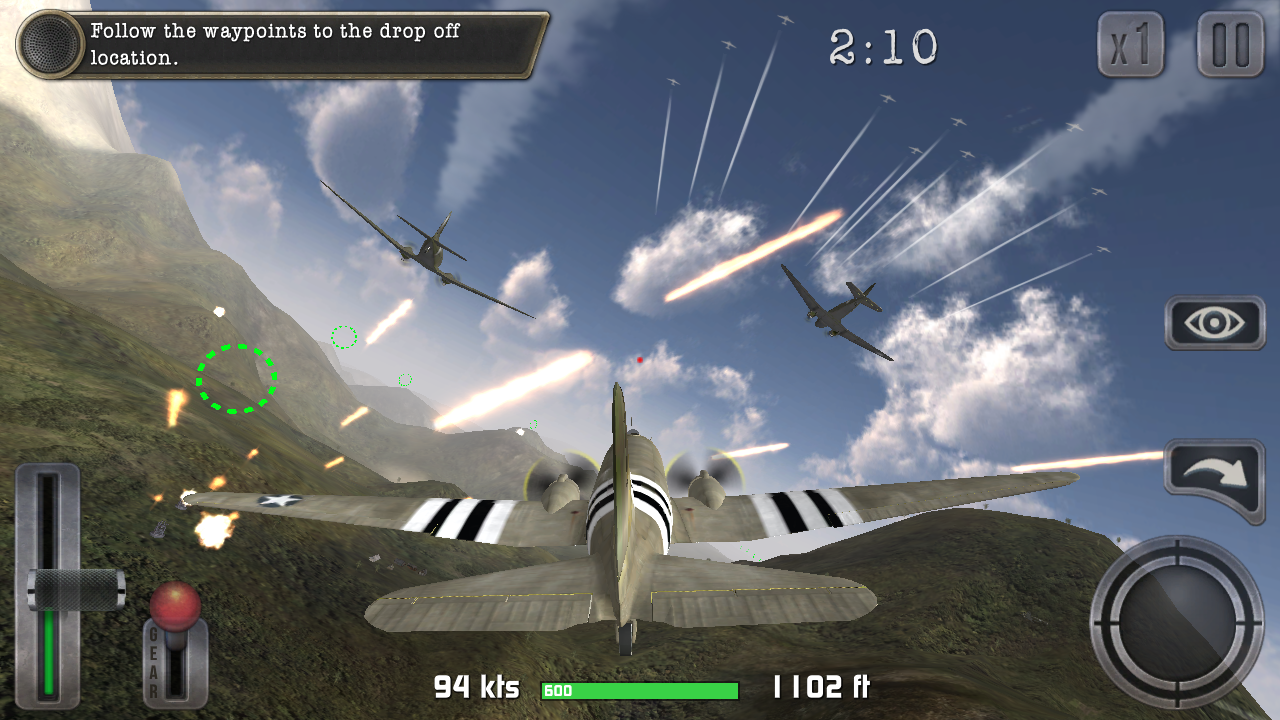 Control-wise, Air Combat Pilot straddles the fence between full-on flight simulation and simplified arcade game. How much you get out of the game will depend on the type of controls that work best for you, and I highly recommend taking some time to calibrate the pitch and roll sensitivity until you’re comfortable. The first few flights will be awkward and clumsy until you do, whether you decide to go with virtual joystick or tilt-based controls. I’m not usually fond of motion controls, but I found them much easier to work with here than the joystick option. The latter gives you the freedom to use your thumb like a joystick on any free areas of the screen, but there’s just not much virtual real estate to work with. Tilting makes ascending and descending while turning a much more natural process.

The first few missions ease you into the controls gradually, starting with basic flight training before moving on to target practice. Once you get the hang of flying in the right direction and targeting enemies, combat is pretty straightforward and enjoyable. There’s plenty to do, too, including a starter set of around 40 missions with a handful of optional bonus objectives in each. You’ll want to tackle as many of those as possible if you don’t plan to shell out money for items, because ranking higher on missions is a great way to earn extra points and money for use in the shop. 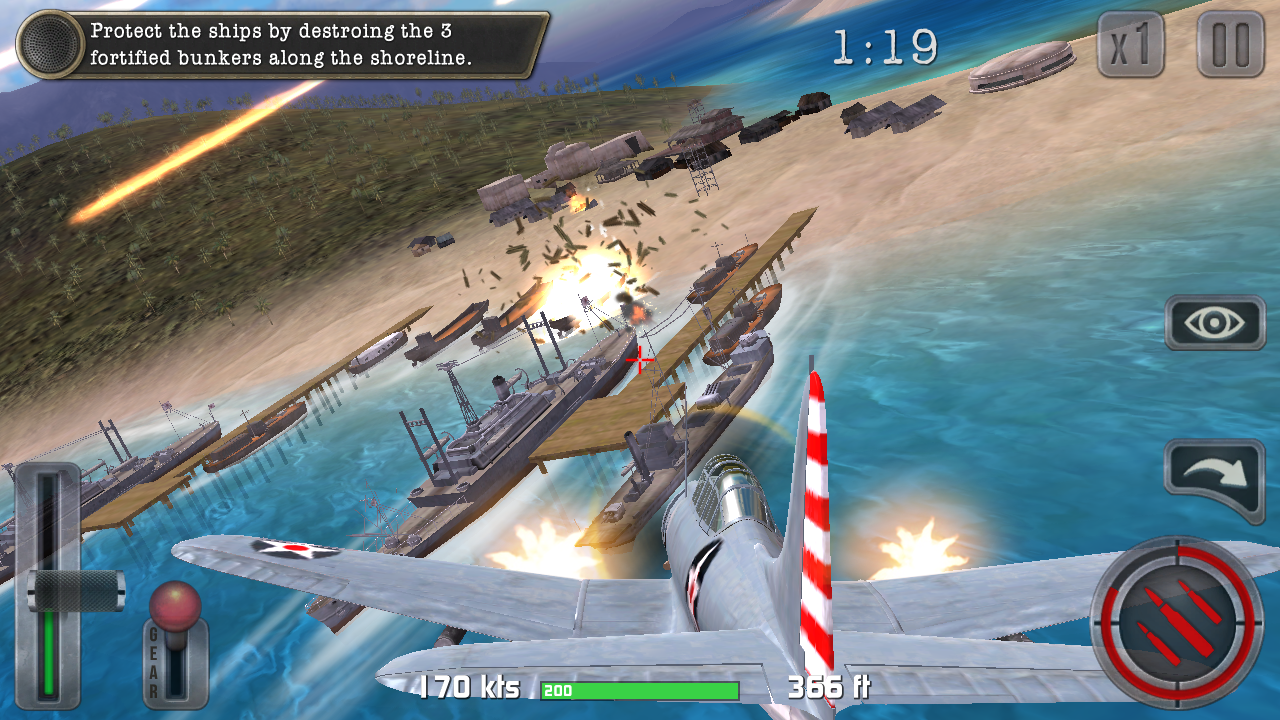 The pre-release hype touted Air Combat Pilot as having the best visuals in a mobile air combat game to date. While I can’t say I’ve played every single mobile entry in the genre to effectively back that claim, the results are certainly impressive. Aircraft models look great in action, and the environments are just detailed enough to avoid any major performance hiccups. It essentially does what a mobile game should; it maximizes the potential of its platform without adding any unnecessary or distracting flourishes. The user-interface has just the right amount of information on it without getting in the way, too.

Beyond the in-app purchases, Air Combat Pilot supports itself through the occasional video advertisement. This is par for the course if you’ve been playing mobile games for a while, and they wisely chose not to compound this with the addition of arbitrary wait times. Whether you choose to pay at any point or not is up to you, but Air Combat Pilot: WW2 Pacific is definitely worth the download. New content should be on the way monthly—including extra missions and aircraft—so ideally this one will have a hefty tailwind behind it.