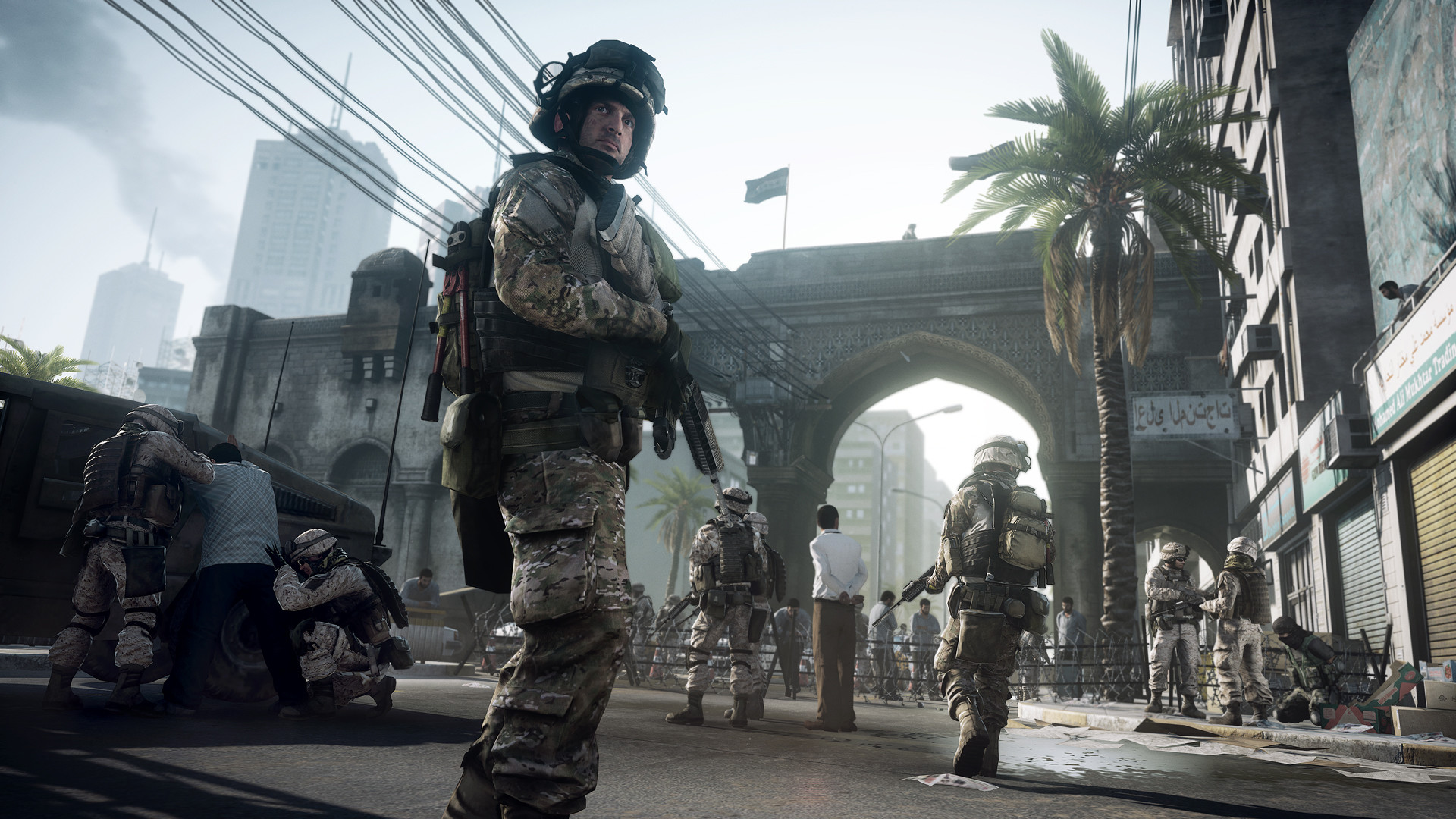 Although heavy on the cinematics, Battlefield 3 does contain enough multiplayer action to keep your blood pumping.

Last time we talked about Call of Duty: Modern Warfare 3, it was one side of the juggernaut war-gaming coin that attacked players near the end of 2011. But how about that other side, which has its own frothing legion of hardcore devotees who are just as steadfast in their hopes of knocking Activision’s king of its lofty throne? Battlefield 3, like Call of Duty, has something unique to offer while still satiating that base need for controller-clamping, white-knuckle modern warfare.

The first thing that stands out about Battlefield 3 is the presentation. While we may never reach the heights of photorealistic depiction—nor should we necessarily strive to—BF3 comes pretty darn close with some of its elaborate vistas. This is, of course, most noticeable in the campaign, which primarily centers on Henry Blackburn, a U.S. Marine under interrogation for possible involvement in a terrorist threat. After a quick subway action setpiece, the framing for the narrative is established, and right off the bat it showcases where Battlefield 3’s single-player campaign goes astray.

Heavy on Cinematics, but Brisk-Paced Levels

A few games have attempted this technique before, but gamemakers should consider letting it stay in the realm of film and television. You put the protagonist under questioning of some kind, and through his recollection of events, gameplay sequences are initiated bit by bit. However, the tension is noticeably decreased when you’re essentially playing through someone’s explanation of what happened, even if it has no real effect on the action at hand. Worst of all, it’s just plain dull. There’s nothing interesting about breaking up the action to watch a couple of CIA agents grill someone, and if anything the cinematics serve as a choice opportunity to grab a snack between levels.

For the most part, those levels are briskly paced, but they don’t quite live up to the promise that is eventually delivered in BF3’s multiplayer. It’s rare that one feels as if they’re truly in control of what they’re doing or how they’re progressing. The path from firefight to firefight is one full of running behind other soldiers, with instructions above their heads begging you to “follow” robotically. With multiplayer that’s essentially a micro-war in and of itself; it’s disappointing to feel so rigidly restricted throughout the campaign. Most of the firefights take place in tight quarters, with the enemies focusing fire on you and only you while everyone else barks orders. Yes, it truly is one man against the world here.

BF3 doesn’t want you to lead, and it doesn’t really spice things up with too many major, screen-shaking events to fill in for that missing sense of control. Rather, there’s an oddly high amount of QTE (Quick Time Event)-style moments that prompt the player to press a series of buttons to evade what would otherwise be a surprising and thrilling moment of danger. In one section, the player is tasked with repelling down a shaft, throwing a flashbang through a window and getting the drop on the enemy. Thanks to the execution, though, this boils down to a few timed button presses that transition into another underwhelming battle in a claustrophobic location. 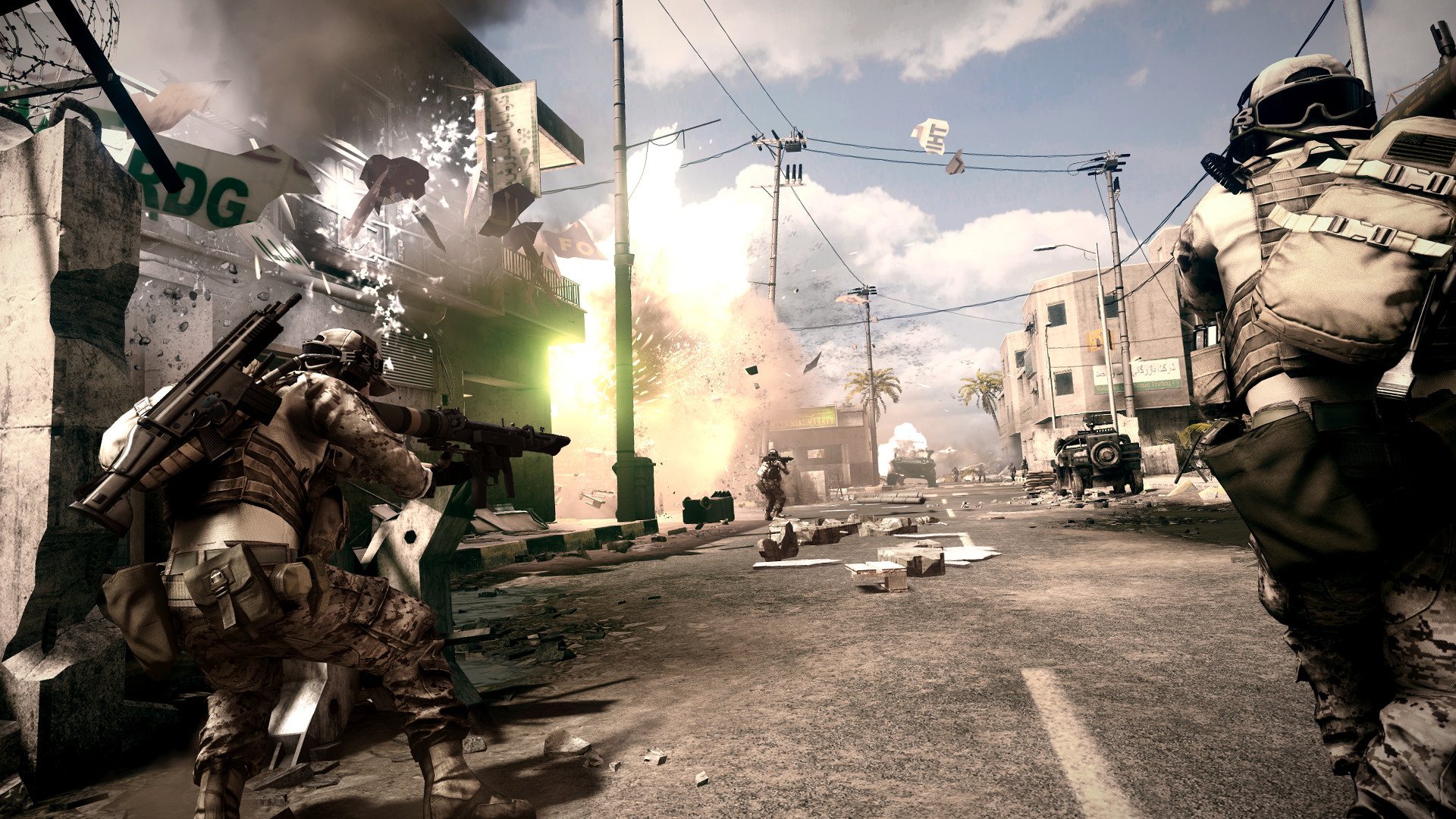 Thus, Battlefield is at its most awe-inspiring when it’s just that, a battlefield. Leave the corridor and parking garage shooting to the Call of Duty games, because BF3 shines when your head is raised atop a tank, the desert wind blazing by. These are the moments when those stunning visuals really come into their own, and the effect is only marred by a few attempts to be a little too realistic. There’s a constant layer of camera-lens dust and scratches on the screen, lending a documentary film look to everything, like you’re really a cameraman hunched in the trenches and braving battle for the sake of journalism. Only you’re not. You’re a soldier, and stuff like that is ultimately superfluous in the long run. The effect would have been much more impressive had they saved it for the few moments when you actually do put something on your face, like a gas mask.

That’s not to say that the whole thing is a drag. There are still a few moments that make BF3’s campaign worth playing through, even if they are few and far between. There’s something special about the first time you step foot in a jet, ready to launch from an aircraft carrier in the middle of the roaring sea. If anything, this is great prep for when you actually get to use those jets to their fullest potential in the multiplayer, but in the campaign the limited control you have still offers an immersive, if brief, airborne treat. Outside of that and a few other bursts of engaging action, other shooters just do it better.

That’s why Battlefield 3 isn’t endlessly lauded for its single-player campaigns. Instead, it’s the multiplayer we look to for our thrills, and the competition doesn’t really stand a chance. Where Modern Warfare 3 is a faster, more arcade-like experience, BF3 is … well, it’s war. Both styles have their place, but if you’re looking for more immersive action that will make you feel like part of a unit, this should keep your blood pumping for quite some time.

Playable classes include Assault, Engineer, Support and Recon, which have been tweaked in relation to the way they played in Battlefield: Bad Company 2 (Medic has been replaced by Support, for example). Players can take these classes through a variety of modes, with 64-player support on PC, and 24-player support on consoles. Obviously this is one of the major differences between the two versions, and the truly dedicated will find a more satisfying war being waged on PC. The action in BF3 really explodes when lobbies are full, whether it’s in the more straightforward Deathmatch, Rush Mode—in which one side attacks and the other defends their M-COM stations—or the capture-the-flag style Conquest Mode.

It’s the possibility that anything could happen, coupled with the overall variety that makes Battlefield 3’s multiplayer stand heads above the competition. It may be a shame that the single-player campaign doesn’t manage to hit its own high notes, but that’s really more of a light appetizer for the loaded main course.