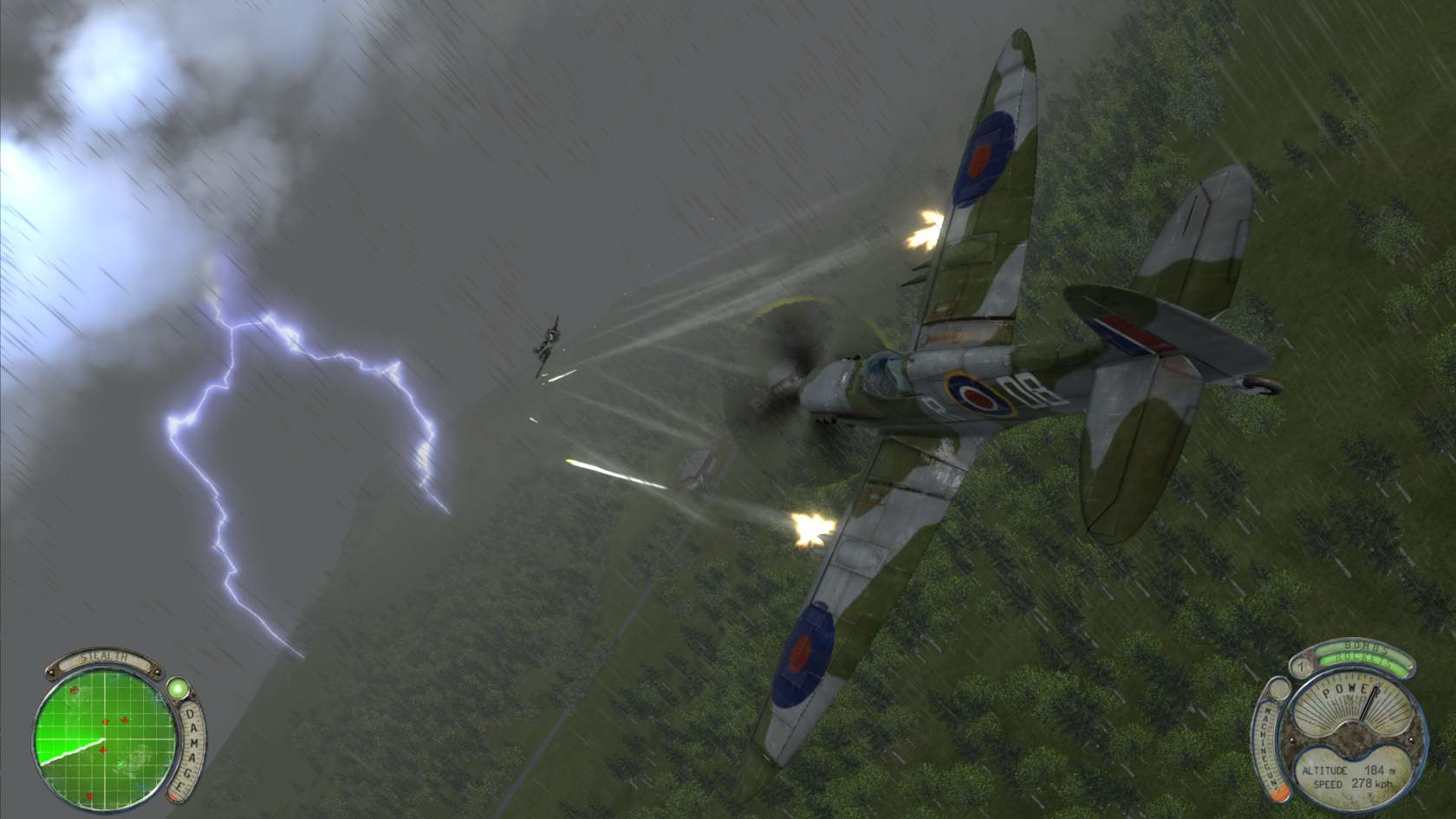 Air Conflicts: Secret Wars is yet another title that has successfully brought engaging dogfighting to consoles.

Air Conflicts: Secret Wars is the perfect example of a game for which the genre has a ton of competition on PC and very little comparable action on consoles. Can this dogfighter compare with its contemporaries, regardless of platform?

The answer depends on how hungry you are for air combat. On one hand, Air Conflicts controls smoothly and provides a variety of mission types throughout its campaign, as well as fairly straightforward but fun competitive multiplayer. It may not stand proudly atop the hill when it comes to any individual aspect of the package, but the point is it works and isn’t a clunky, broken mess. Controls come in two flavors: Arcade and Simulation. The former makes it easy for pretty much anyone to hop in the cockpit and start shooting down bogeys left and right, while the latter offers some more refined control for maneuvering the aircrafts.

Options are even more plentiful when it comes to the camera perspective, but I found it really difficult to pilot planes and accomplish much of anything outside of the default third-person view. It can be a bit easier to aim when in the straight-up cockpit mode, but it’s not worth the sacrifice of other functions, and switching constantly between views makes for a dizzying volley of zooms and swoops. In other words, you’re more likely to crash switching angles at a few thousand feet than you are zipping along within inches of treetops and buildings.

A Typical Story With a Not-So-Typical Protagonist

Air Conflict’s story is typical of the genre, with a hotshot female (!) pilot protagonist being one of its few unique offerings. Things start off simple, with delivery missions that help acclimate the player to flying around and taking down the occasional enemy. Between missions, our heroine, Dorothy “DeeDee” Derbec, frequently expresses her misgivings about her role in the war, and whether or not the ends justify the (often horrific) means. She wishes to be neutral, taking on jobs like smuggling arms and whiskey, but her story is ultimately fated to intertwine with that of her father and the truth behind his disappearance. 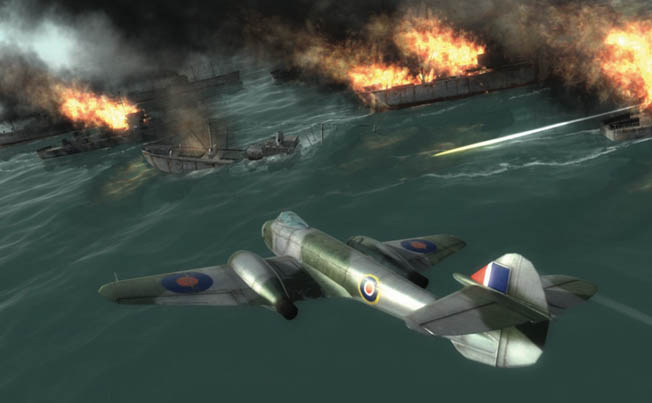 Outside of missions, the narrative plays out through a still, comic frame-style presentation, which would work fine were the rest of the execution not so dull. Air Conflict’s environments and aircraft look decent enough in action, but the stilted animations and poor texture work show their true colors during the cutscenes.

The worst offender, however, is the voice acting, which couldn’t be more emotionless if it tried. It’s like hearing an incredibly detached person’s recollection of World War II, and the yawning manner in which it’s read doesn’t reflect the urgency of the words that appear in the script. When DeeDee is under fire, she utters the occasional expletive with all the energy of a sleeping, dreamless dog. The supporting cast isn’t much better, but when readings with this little enthusiasm are the takes that made the final cut, one would imagine everything left on the cutting room floor is just about as unfit for human ears as can be. If there is anything on the cutting room floor, that is.

…Don’t Pick It Up For The Story, However

It’s a good thing most people don’t come to games like this for the story, though it wouldn’t kill a developer to really give it their all in that regard. I’d love to see a great character-driven narrative in more of these flight titles. One needn’t devote bottomless wells of cash just to put a little more heart into the stories, and the same goes for the way said stories are portrayed. Still comic frames are fine and dandy, but back them up with some solid performances from actors who sound like they believe in what they’re reading.

Regardless of how poor its execution may be, the story does take players through some interesting combat scenarios, and there’s a decent amount of variety in each. DeeDee wrestles with profit and the past versus her own morals across the Siege of Tobruk, Fall Blau, Operation Black, Operation Belt, Operation Overlord, the Slovak National Uprising, and the final days of the war from October 1944 to April 1945. There are plenty of straight-up seek and destroy bombing runs as well as protection, stealth missions, and more.

The Stealth missions are a great idea, but right off the bat the execution is a bit puzzling. On one hand, it’s fun to remain undetected, but it also mostly entails laying low and keeping your eye on the radar to avoid the big white circles that represent an enemy plane’s field of detection. Once busted, all the “being seen is not an option” talk is thrown out the window, and it’s time for some dogfighting. Missions can still be successfully completed, thankfully, but more often than not, there’s little reason to actually remain undetected when it’s so easy to bump right into that circle and initiate combat. 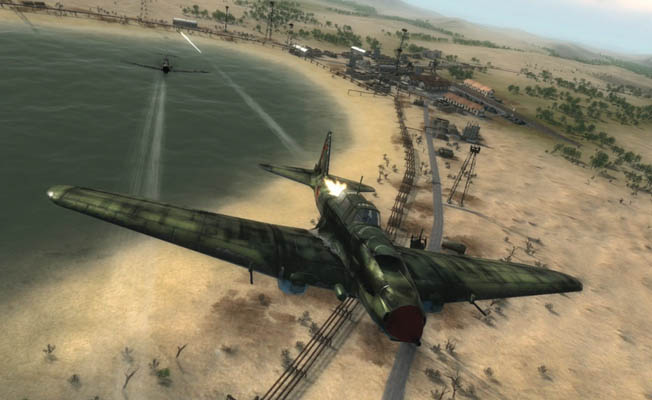 There are some other frustrations along the way, especially as you make your way deeper into the campaign. Checkpoints are plentiful and relatively forgiving, unless you happen to get battered along the way, in which case loading the checkpoint will keep your plane in the same tattered, hopeless condition. Should the situation prove inescapable in that state, it’s best to start the mission over from scratch, which is particularly annoying in the longer sorties. Naturally, getting better at the game helps, but some situations are hopeless. One, for instance, has DeeDee outmaneuvering Russian planes on the way to off a target. The enemies aren’t marked on the radar since it’s just an evading mission, and once you make it to the target you essentially have to circle the area for two minutes as you wait for him to take off so you can shoot him down. It’s tedious, to say the least, and even more so when it comes time to flee the area in your Swiss cheese aircraft.

Imperfect, But A Lot of Replay Value

Online multiplayer deathmatches are actually really fun if you can find a lobby with enough people in it (the console version supports up to eight at a time). Fighting one-on-one—which I ended up doing quite a few times due to lack of players—quickly becomes a game of circling one another until the timer runs out or someone gets bored, but get a full lobby and there will be plenty of careening, screeching rockets and close calls. There’s also the option of linking systems for those who prefer to fight in the same room.

The only aspect of Air Conflicts: Secret Wars I was unable to test out is the 3D compatibility, but those able to fully enjoy that function are few and far between. As many negative things as there are to say about it as a whole, I still find myself coming back for the occasional airborne showdown, even after completing the campaign. PC gamers can probably skip this one, but those looking for some dogfighting action on relatively flight-starved consoles might want to give its open skies a shot. Just consider muting the game’s dreadful dialogue and predictable, one-note war game orchestrations.