An early World War II 'black program' produced the Bell XP-59A Aircomet, America's first jet plane, but it was too late to fight in the war.

The planning was done behind closed doors. The work was done at secret facilities. The result? America’s first jet plane—a fighter that might have seen combat in World War II, had things gone differently. Army Air Forces (AAF) commander Maj. Gen. Henry H. “Hap” Arnold chose the Bell Aircraft Corporation of Buffalo, New York, to undertake a secret project known as MX 397. Only a handful of people around company president Larry Bell knew that the term referred to the first American fighter jet, which was soon renamed the XP-59A. Germany, Italy, and Britain were ahead of the United States in developing jet aircraft, but Americans were making faster progress than they are usually given credit for; they possessed considerable scientific know-how and they were good at keeping secrets.

Almost everything about the project was given labels that were designed to disguise the project’s real purpose and to fool German or Japanese agents. General Electric routinely referred to the engine it was developing with help from British engineer Frank Whittle as “our spare part.” The P-59 designation in the Army’s “pursuit” series of warplanes had previously been assigned to an aircraft that was never built; the number was reused to discourage attention.

Much of the technical work was done in a building belonging to General Electric in Lynn, chosen because it looked bland and plain and was marked with a sign on the door reading “MISCELLANEOUS.” General Electric later boasted that its engine, largely copied with permission from Whittle’s work, had but two moving parts, a pair of impellers, and that its compact shape, dictated by the centrifugal flow of air passing through the engine, made it practical for many applications on aircraft. But it has never been completely clear why Bell was chosen for the project. Its P-39 and P-63, after all, were mediocre. Brig. Gen. Benjamin W. Chidlaw, who was overseeing Anglo-American cooperation on fighter jet engine development on Arnold’s staff, wrote in a document, “Bell [has] certain isolated facilities which could be made readily available to start this project under the strict conditions of the ‘SECRET’ classification as imposed by General Arnold.” Chidlaw also liked the fact that Bell’s Buffalo plant was relatively close to General Electric’s Schenectady and Lynn facilities.

Larry Bell was an aviation executive who hated to fly. He chose as XP-59A project manager his chief test pilot, Robert M. Stanley, who loved to fly but hated executive duties. In June 1942, Stanley took over the project for the company and began making arrangements to ship the first XP-59A to a remote test site he had never heard of before. The location was Muroc Army Air Field located between the San Bernardino and Shadow Mountains and named in reverse for the Corum brothers who had settled the area. Chidlaw called it “way to hell and gone” away from Los Angeles. The site offered remoteness and the hard surface of Rodgers Dry Lake. In mid-1942, engineers and technicians began arriving there, many of them unaware of the purpose for their transfer to the California high desert. Today, Muroc is known as Edwards Air Force Base and no longer feels nearly as remote as it did then. Robert Stanley reported that the XP-59A had enormous potential. But even at the time of its initial flight, he and others were questioning whether it would ever see combat. Yes, the XP59A had been conceived as a fighter and not just as a flying guinea pig, but despite its advantages the Airacomet, as it was nicknamed, was not much faster or much more maneuverable than prop-driven fighters like the North American P51 Mustang and the Vought F4U Corsair. 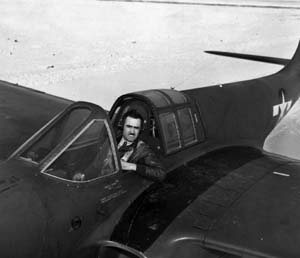 But not having a propeller up front meant that the Airacomet’s armament of three Browning M2 .50-caliber machine guns and one M-10 37mm cannon could be placed in the nose and positioned to fire straight ahead rather than placed in the wing and positioned to converge. This made the XP-59A a better gunfighter than any prop-driven warplane, but early tests also showed that it was an unstable gun platform. Stanley reported that the entire aircraft shook when he pulled the trigger. By mid-1943, five XP-59A Airacomets were in the test program at Muroc and at Wright Field, Ohio. The Army Air Forces had placed orders for 300, or enough planes for about nine combat squadrons. When it became apparent that the XP-59A would not be tangling with Messerschmitts or Mitsubishis, the number of aircraft built was reduced to 66, including three XP-59As, 13 YP59As, 20 P-59As, and 30 P-59Bs, all with only minor differences and with progressively improved versions of the General Electric engine. No photograph of an XP-59A had yet appeared in public, and officials in the newly constructed Pentagon building had released no details about the project or about the P-80 that Lockheed was developing separately and had yet to fly.

Both the XP-59A and the P-80 were part of what would be called a “black program” in today’s parlance, not outlined in traditional budgeting documents, revealed to only a select few on Capitol Hill, and unknown to the public until late 1944. On several occasions when an Airacomet was moved by ground transportation, a fake propeller covered by a tarpaulin was placed on the nose of the aircraft to deceive any observer about the source of its power. In June 1945, the Army Air Forces stood up the 412th Fighter Group at Muroc. But the war ended weeks later, and the group was transferred to March Field near Riverside, California. By then, everyone knew the Airacomet would not live up to the initial expectation that it could serve as an operational, combat-ready fighter. The P-80 had begun flying and was demonstrating superior performance. Moreover, a dozen other fighter jet designs were in the postwar pipeline, including the immortal North American F-86 Saber of Korean War fame. Once top secret, the XP-59A, YP-59A, P-59A, and P-59B Airacomets were now handy “hacks” to teach pilots the basics of single-seat jet flying. Captain Eugene A. Wink of the 412th was one of the first line military pilots to fly the Airacomet. He had flown the Republic P-47 Thunderbolt in combat in Europe and had been impressed with its ruggedness. In contrast, “the Airacomet seemed a little flimsy, a little fragile,” Wink recalled. He said, however, that it “could turn on a dime” and “I always wondered what it would be like to get into a dogfight with it.” In 1949, the Air Force finally retired the last example of its first operational jet fighter, which was developed with high hopes, blazed new trails, but ultimately proved to be something of a disappointment.