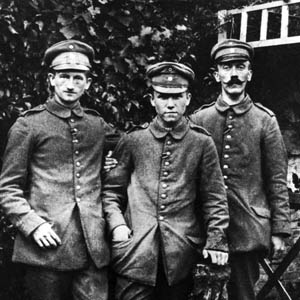 Adolf Hitler’s Brush with Death in World War I

Before becoming the ogre of Europe, Adolf Hitler was a corporal in the Bavarian 16th Reserve Infantry Regiment in World War I.

Private Henry Tandey had a clear shot at the German soldier. He was so close that he could look his enemy in the eyes. Tandey could not have missed. But the man was wounded; one account of that far away day in 1918 says that the German was lying bleeding on the ground. In any case, the German soldier made no move to resist; he simply stared at the Englishman. Tandey eased off the trigger of his Enfield and did not fire. “I took aim,” said Tandey later, “but couldn’t shoot a wounded man. So I let him go.” Maybe he shouldn’t have. The German soldier went on his way, and Tandey went his. No doubt the Englishman forgot all about the man he had spared, because Tandey still had a war to fight. And not long afterward, Tandey got the welcome news that he had been awarded his nation’s highest medal for gallantry, the Victoria Cross (VC). He would receive his cross at Buckingham Palace in December 1919, at the hands of King George V himself.

Tandey won the VC near a French town called Marcoing, which lay about seven kilometers southwest of Cambrai, on September 28, 1918. In ferocious fighting later the same day, Tandey and eight other men were cut off behind German lines. Vastly outnumbered, Tandey still led his handful in a wild bayonet charge that smashed into the Germans and drove them back against the rest of Tandey’s unit, which took 37 prisoners. Wounded twice, Tandey went on to lead his men in a search of dugouts, winkling out and capturing more than 20 additional Germans. Only then would Tandey stand down and get his wounds dressed. Badly hurt, for the third time in the war, he was on his way to a hospital in England. 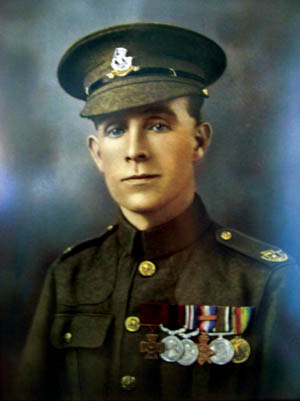 Tandey was born in 1891, in Leamington, Warwickshire. The son of a stonemason who had also soldiered for Britain, he became a professional soldier, a tough, long-service infantryman who survived four years of bitter war in Belgium and France. Nicknamed “Napper,” Tandey was not a large man, standing less than five feet, six inches, and weighing just under 120 pounds. But what he lacked in stature, Napper Tandey made up in grit and high courage.

Back in 1910, he had enlisted in Alexandra, Princess of Wale’s Own Yorkshire Regiment, commonly known as the Green Howards. Beginning life as the 19th Regiment of Foot, the Green Howards were a famous outfit named for the color of their uniform facings and the name of their first colonel. It distinguished them from another famous regiment commanded by a different Howard, which wore buff-colored facings. During the war, that regiment would win its own fame simply as the Buffs, the East Kent Regiment.

Tandey had served with the 2nd Battalion of the Green Howards in South Africa and on the island of Guernsey before the war. He was a tough, able soldier, and by the time of his exploit at Marcoing he had already been five times “mentioned in despatches,” a peculiarly British means of honoring high achievement under fire. He had also won the Distinguished Conduct Medal while commanding a bombing party. On that occasion, he rushed a German post with just two soldiers to help him, killing several of the enemy and capturing 20 more.

Tandey also held the Military Medal for heroism under fire. This decoration he won at a place called Havricourt in the fall of 1918, where he carried a wounded man to safety under heavy fire and organized a party to bring in still more wounded. Then, again in command of a bombing party, he met and broke a strong German attack, driving the enemy back, as his citation read, “in confusion.” He had been wounded on the bloody Somme in 1916 and shipped back to England to recover. Once on his feet again, he joined the 9th Battalion of the Green Howards, with which he was again shot up at Passchendaele in the fall of 1917.

After some time in the hospital in England, it was back to France, this time with the 12th Battalion of the regiment. When the 12th Battalion was disbanded in July 1918, Tandey was attached to the 5th Battalion of the Duke of Wellington’s (West Riding) Regiment, and it was with this outfit that he won his VC. After the war, Tandey soldiered on with the 2nd Battalion of the Duke of Wellington’s, serving in Gibraltar, Turkey, and Egypt. In 1920 he was one of 50 VC holders who served as a guard of honor inside Westminster Abbey during the ceremonial burial of Britain’s Unknown Soldier. In January 1926, he was discharged as a sergeant, at that time the most heavily decorated enlisted man in the British Army. He spent the next 38 years in his home town of Leamington, where he married and worked as a “commissionaire” or security man for Standard Motor Company. A modest, quiet man, he talked little about the war.

With his fighting days well behind him, Tandey’s war should have been over. But it wasn’t. About the time of the award of his VC, a painting appeared, a graphic image of war by Italian artist and illustrator Fortunino Matania. Matania had included Tandey in his painting of soldiers at the Menin Cross Roads in 1914, not far from the battered Flemish town of Ypres. Tandey is facing the viewer, carrying a wounded soldier on his back, and the painting also shows other men of the Green Howards and a wounded German prisoner.

Matania’s vivid painting became something far more than a picture, all because of the man who acquired a copy of it. For in 1938, then British Prime Minister Neville Chamberlain made his futile attempt to guarantee “peace in our time.” Flying to Germany to meet Hitler in the Alps, he was entertained at the Eagle’s Nest, perched on the Kehlstein Rock high above the town of Berchtesgaden. And there, displayed on a wall of that ostentatious aerie, was a copy of Matania’s painting. It was a curious choice of art for Hitler since it showed only British troops, but Hitler soon explained.

Hitler pointed to Tandey, commenting to Chamberlain, “That man came so near to killing me that I thought I should never see Germany again, providence saved me from such devilishly accurate fire as those English boys were aiming at us.” Then Hitler went a step further. “I want you to pass on my best wishes and thanks to the soldier in that painting,” he said, and Chamberlain replied that he would contact the man when he returned to England.

The prime minster was as good as his word. Only then did Tandey find out that the pitiful wounded man he had spared, the bedraggled German corporal in the Bavarian 16th Reserve Infantry Regiment, was now the chancellor of Germany, on his way to becoming the ogre of Europe. Tandey’s relatives remembered the telephone call from Chamberlain. When Tandey returned from talking to the prime minister, he related the tale of Chamberlain seeing the painting. The prime minister told him, he said, that Hitler had pointed to Tandey’s picture and said, “That’s the man who nearly shot me.”