Sergeant Jacob Vouza was one of many native heroes of Guadalcanal.

A few days after the Marines had established a toehold on the island of Guadalcanal, a trio of natives appeared at the mouth of the Tenaru River. One of the individuals spoke English, and he offered their services to the Leathernecks as scouts. A tall, muscular man, he explained he had retired from the native constabulary as a sergeant major but had fled from his home when the Japanese had invaded his beloved Solomon Islands. Realizing his value, a group of Marines quickly whisked him to the CP to be briefed. He shook the hand of division intelligence officer Lt. Col. Edmund J. Buckley and introduced himself: “I am Sergeant Major Jacob Vouza.”

Vouza and the other native scouts were a tremendous asset to the Marines during the Guadalcanal campaign. These select men had been recruited and trained by the British for law enforcement purposes. Together with men like Captain Martin Clemens, a coastwatcher (Australian group who spied on the Japanese) and former official in the civil government, this dedicated group of men provided the Marines with information on enemy troop movements while also serving as guides through Guadalcanal’s often tricky terrain and as laborers. 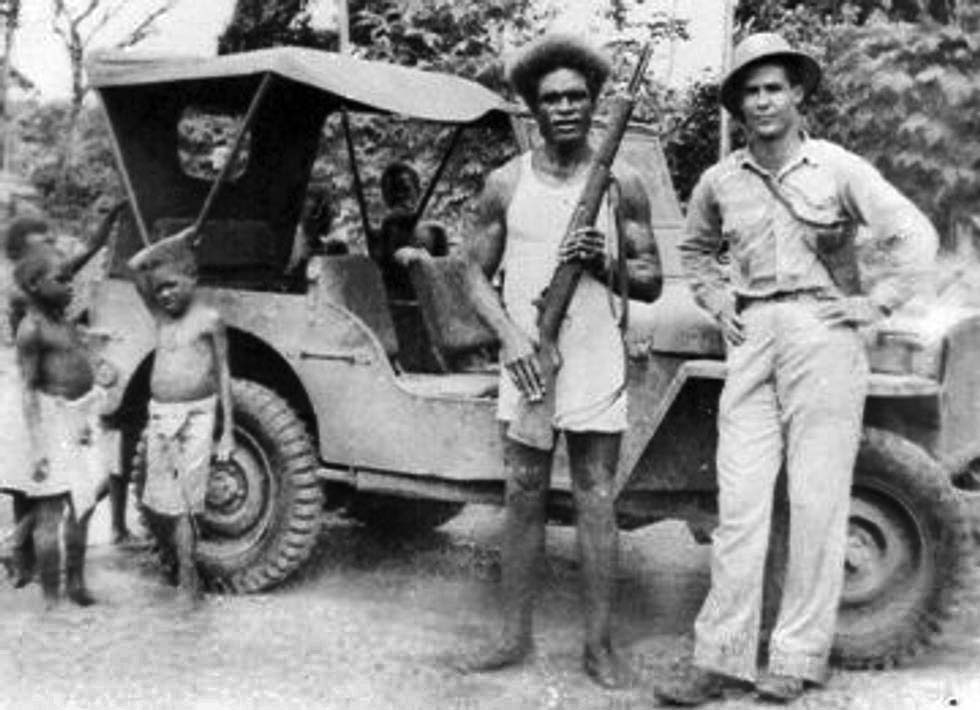 However, Jacob Vouza would be the favorite of the Marines, especially the Raiders. Impressed by his keen scouting abilities, one Marine gave the sergeant major an American flag as a gift. However, this token of friendship would nearly cost him his life when the Japanese found the flag on him and knew he was scouting for the Americans.

Weakened and Left for Dead

On a scouting mission near the village of Volonavua, Vouza was captured by a Japanese patrol. Bound by straw ropes, the enemy soldiers took delight in clubbing him with their rifle butts. Still refusing to talk, he was cut and stabbed by bayonets and swords until he passed out from loss of blood.

Leaving him for dead, the Japanese departed. When the indomitable islander awoke, he gnawed his way through the ropes and began to make his way back to friendly lines. Although weakened and near death, Vouza crawled for nearly four miles. Discovered by Martin Clemens, who could “barely look at him” because of the severity of his wounds, he was taken to an aid station. Before being treated, he informed Clemens of the size and location of the Japanese forces approaching the Marine perimeter.

Remarkably, the determined islander ultimately survived his horrendous ordeal. He continued to lead other patrols throughout the remainder of the struggle for Guadalcanal.

For his exemplary bravery, he was presented with the Silver Star and Legion of Merit. In addition, he was awarded Great Britain’s George Medal. Also, a scholarship fund was set up in his name to assist underprivileged Solomon Island children in attaining a better education. In 1979, he was knighted by Queen Elizabeth II. He was now the Honorable Sergeant Major Sir Jacob Vouza.

Revisiting Guadalcanal years after the war, The Marine Raider Association placed a bronze plaque on a granite block, which read: “We dedicate to SERGEANT MAJOR JACOB VOUZA and his SOLOMON ISLAND SCOUTS for supreme intrepidity and valour in the face of the enemy during the struggle for Guadalcanal 1942-43.”

Vouza passed away in 1984. The stone block with the bronze tablet became his headstone. The venerated scout and guide, who was willing to sacrifice his life for the Marines on Guadalcanal, will be remembered always by those who fought alongside him.