WWII Relics: Lausdell Artifacts From the Battle of the Bulge

In 1994, a group of Belgian relic hunters found a series of surprising artifacts from the Lausdell crossroads during the Battle of the Bulge.

…He pulled a rusty American helmet from the ground. It had been an easy target for his metal detector, and as WWII relics went, this one proved something special. It had a hand-painted Indian head insignia—emblem of the 2nd Infantry Division.

The helmet actually had two such insignias, one on its steel shell and the other on its plastic liner. The latter also had a crudely etched rank insignia of a Technician Fifth Grade; Jean-Louis Seel had never found a helmet like it before in more than a decade of searching for battlefield relics. Best of all, the helmet came from Lausdell. Seel knew well the story of McKinley’s battalion and its defense of the crossroads.

A Job Too Large For One Man 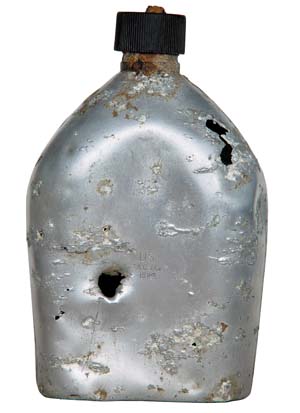 The 31-year-old Belgian discovered the helmet on April 26, 1994, his first time searching at Lausdell. Upon closer examination, he found the name Cortes scratched into the paint on the interior of the steel shell.

The following week, Seel returned to the crossroads for another search, having obtained permission from the farmer who owned the pastures in the area. Metal detector in hand, Seel scanned the field once occupied by McKinley’s Company A.

His detector suddenly screamed in his ears: a very large target lied beneath.

He used a mattock to dig down and discovered what appeared to be a metal plate. He kept digging but could not find its edge. The object was huge. Excavating it was too much him for him alone. He came back almost two weeks later with a friend, but the task overwhelmed the pair.

Seel returned on May 20 with fellow relic hunter Jean-Philippe Speder and three other men. Together they muscled out an enormous slab of steel, which several of them recognized as part of a Panther turret. The big fragment had a periscope port and an armored ventilator that once expelled gun gases from the fighting compartment. Traces of yellow-ochre paint remained on the exterior surface, and red-oxide primer remained on the interior side. But the most remarkable feature was a fist-sized hole punched through the steel by an American artillery shell; the resulting explosion had shattered the tank like an eggshell. Additional bits of the dead Panther turned up in the field, although none as large or impressive as the turret fragment.

The ground also yielded a bounty of GI artifacts, which Seel and Speder ferreted out after deducing that American soldiers probably entrenched themselves along the hedgerows that edged the field. “We thought like infantrymen,” Speder said. “Where would experienced soldiers dig in if they had to defend this place?” The hedges offered the only concealment.

Abandoned Foxholes Made by G.I. Captives 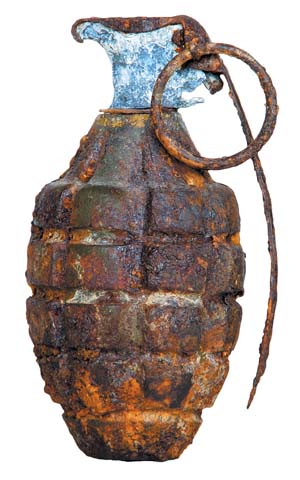 At regular intervals along the hedges, the two Belgians detected metallic objects two to three feet down, where foxholes had once existed. In almost every case, the diggers found a rotted cartridge belt. There were also canteens, mess kits, and other pieces of personal gear. Some of the items had engraved markings, identifying them to members of Company A who fell into German captivity. Seel and Speder imagined the scene, hapless prisoners shucking their gear at gunpoint before being marched away. After the war, local farmers filled in the foxholes, entombing the relics.

Seel later recalled that “many of the cartridge belts were still full of ammunition. I guess not everybody fought to the last bullet.”

The excavation work that began in 1994 continued intermittently for another three years. Throughout that time, Seel and Speder received help from two other diggers, Marc Marique and Jean-Luc Menestrey. The foursome scoured the pastures once occupied by Companies A, B, and K. Besides more engraved items, they found a tripod for a .30-caliber heavy machine gun, which probably belonged to soldiers of Company D.

Only one firearm came to light during the three years: an M1 rifle, discovered by Marique in November 1996. While cleaning it, he discovered the weapon had jammed. He also discovered an Indian head carved into the wooden stock.

The work at Lausdell included more than just exhuming buried material. Speder mapped the area and recorded foxhole locations and places where engraved artifacts and other special objects turned up. He considered that information as valuable as the WWII relics themselves.

Prior to the last dig, the Belgian team learned about a location where farmers supposedly buried a sizable collection of battlefield debris. The team swept the spot with a metal detector but found nothing. “If anything’s there, it’s deep,” Seel said, “and it probably includes a lot of dangerous munitions.”

The team left the spot undisturbed.

“Lausdell can keep some of its artifacts,” Seel added.

2 thoughts on “WWII Relics: Lausdell Artifacts From the Battle of the Bulge”