Could an M4 Sherman Tank Even Survive Against a German Panther?

No Sherman could—on paper at least—stand up to a Panther, but the U.S. had the priceless advantage of supporting airpower, plentiful reserves, and an overwhelming superiority of numbers.

The German Panzer-kampf-wagen V (Panther) tank was superior to the American M4 Sherman in almost every respect, but it could not guarantee victory at every encounter. The Germans knew that their Panther, with its balanced design of firepower, mobility, and crew protection, was their best armored vehicle. It had a superior main gun and frontal armor. Its 75mm high-velocity weapon, while not as powerful as a Tiger’s 88mm, could easily penetrate a Sherman’s hull or turret at all battlefield distances. The frontal armor was 100mm thick and sloped to deflect shots. Its wide steel tracks gave it excellent cross-country performance and reduced ground pressure.

The Panther was originally designed to replace the German Mark IV tank in response to the Russian T-34 and KV-1. In fact, early design models of the Panther resembled the T-34 in both looks and layout. However, the Panther Committee decided in favor of more conventional engineering and this resulted in the unique Panther design. 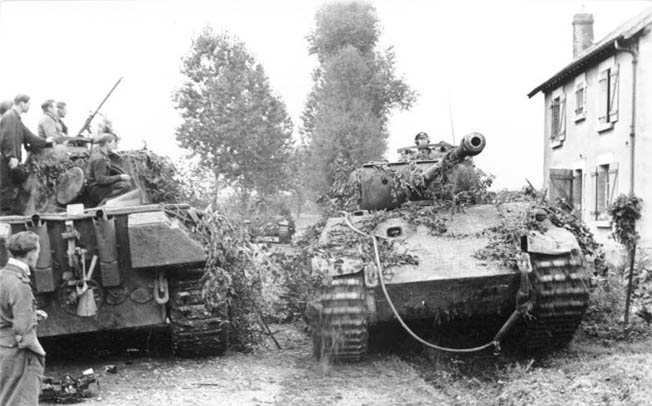 The M4 Sherman Tanks Had Shortcomings in Design…

The Sherman was at a disadvantage. Although it mounted 75mm cannon, it was of a low-velocity type. The Sherman’s designers felt that a low-velocity gun would last longer than a high-velocity one. They failed to realize that few Shermans would ever last long enough in combat to wear out their barrels. Later versions would have an upgraded high-velocity gun, but they would not reach front-line units until late November 1944, five months after the Normandy invasion. The armor, at 81mm, was considerably thinner than the Panther’s and unable to withstand its armor-piercing ammunition.

But the Sherman did have some advantages. Its thinner armor made it lighter and more maneuverable on solid ground, an important advantage in the cold, hilly terrain and small villages of Western Europe. Also, the Sherman’s turret had a much quicker rotation rate than the Panther’s, usually allowing American crews to get off the first shot in combat.

The Sherman also enjoyed a greater reliability than the Panther, which was more prone to breakdowns and mechanical difficulties. No Sherman could—on paper at least—stand up to a Panther, but the U.S. Third and Seventh Armies had the priceless advantage of supporting airpower, plentiful reserves, superb logistics, and an overwhelming superiority of numbers. With its speed and ability, the Sherman could outflank the enemy armor, leaving many of them to face American tank destroyers and aircraft.

…But They Also Had Strength in Numbers

In the final analysis, there were simply too many American tanks for the Germans to deal with. The American war industry, free from bomber raids and supported by a motivated work force (Germany resorted to slave labor) produced nearly 50,000 Shermans, more tanks than Germany and Great Britain made during the entire war. Germany only produced about 6,000 Panthers.

As a result of the air superiority, American logistics overwhelmed the Axis powers. Replacement parts were always in abundance. Tank retrieval crews pored over the battlefields, often while the firing was still going on, and brought back Shermans for immediate repair. Meanwhile, the Germans were forced to leave any damaged or broken-down Panthers where they stopped.

Sherman tank crews’ last great advantage was in experience, even though Germany had been at war six years before most of the American tankers invaded France. In early August, Adolf Hitler ordered that all new Panthers sent to the West would go to new armored formations rather than depleted divisions. Thus, Germany’s veteran tankers received lighter Mark IVs, while new, inexperienced crews got the better tanks. So whenever Americans faced off against the Panther, they were usually more skilled in the tactics of close combat.

Despite their advantages against the Panther, American tankers knew their Shermans were no match for the Wehrmacht’s main battle tank; thus, the Sherman’s nickname in Western Europe was the “Death Trap.”

39 thoughts on “Could an M4 Sherman Tank Even Survive Against a German Panther?”