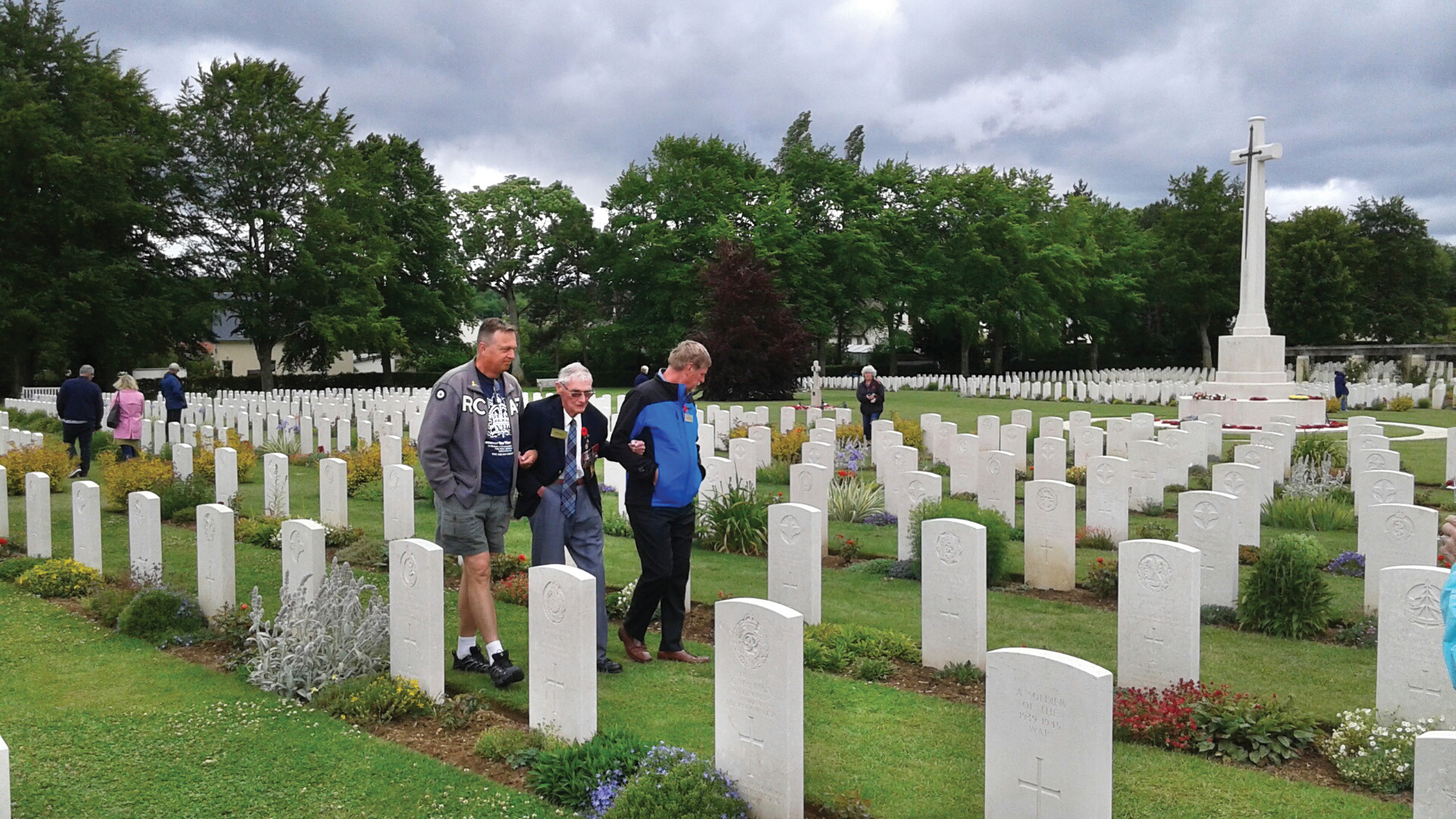 This article appears in: Fall 2019

This past June I once again had the honor of guiding a group of 30 Smithsonian guests to the hallowed ground of Normandy, France, to visit the sites. This time was especially memorable as it was the 75th anniversary of Operation Overlord—the largest combined air and sea invasion in history.

This was my sixth tour, and it never gets old. This one was especially moving. In addition to seeing more than 30 C-47 transport planes flying in formation over the beachheads, and walking on the sands at Omaha and Utah Beaches, and standing on the insignificant-looking bridge at La Fiere where a tremendous battle once raged, and walking the field where Dick Winters’ small company blew away a battery of German guns, and standing in the town square of Ste. Mère-église where paratroopers drifted down into waiting German fire, and being present at the American cemetery when French President Emmanuel Macron and U.S. President Donald Trump gave two of the best speeches of their lives, there was also the thrill of being able to meet and talk with and shake the hands of many of the British and American survivors of that horrific day of June 6, 1944.

These men—a dwindling bunch now in their 90s and bent with age and infirmities—had been, three-quarters of a century ago, mere lads in their late teens and early 20s, thrust into a maelstrom of fire and death. How anyone came out of the invasion alive is beyond me.

Yet, they were there, and they did it. When the medal-bedecked U.S. veterans were introduced on stage at the cemetery ceremony, the audience of some 15,000 rose as one and gave the gentlemen a standing ovation that lasted for 10 minutes. If we could have gone on for 10 hours or 10 days, I think we would have done it. They deserved all of it—and more.

There were other events that have seared their way into my memory. One of the people in my group was first cousin of two men with strong connections to the invasion—Roland and Walter Ehlers of the 1st Infantry Division. Tragically, Roland was killed on Omaha Beach on D-Day, while Walter went on to receive a battlefield commission and earn the Medal of Honor. (I had the privilege of interviewing Walter for my 2004 book, The Fighting First, and now I have met a relative of his.)

On our last day, we visited the famous Pegasus Bridge and then the British cemetery at Ranville. British headstones carry personal inscriptions; the one that got me was one that said, “We had planned a wonderful future, but now that is all gone. Your loving wife, Claire.” There are hundreds like that. There wasn’t a dry eye in the cemetery.

One member of our group summed up the tour perfectly: “It started out as a 10 and kept getting better.”

If you’ve never been to Normandy, don’t put it off any longer.