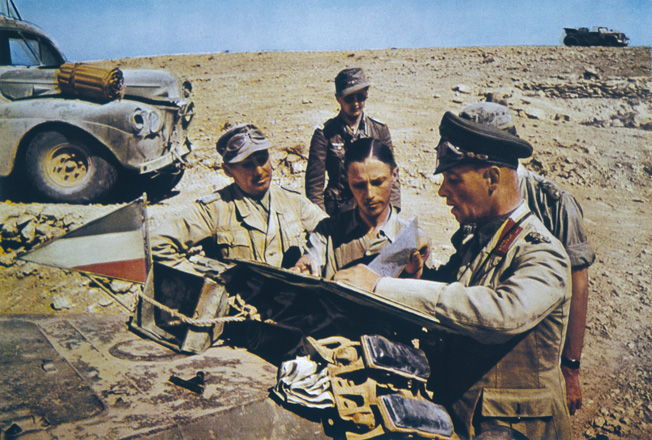 Field Marshal Erwin led the vaunted German Afrika Korps in the desert during World War II and committed suicide after being implicated in a plot to kill Adolf Hitler.

Born on November 15, 1891, in Heidenheim, Germany, Erwin Rommel was a hero of World War I, receiving the Pour le Mérite, or Blue Max, for his actions on the Italian Front. In World War II, Rommel led the German 7th Panzer Division during the lightning conquest of France and the Low Countries in May and June 1940. When Italian forces foundered in North Africa, Adolf Hitler ordered Rommel and the nucleus of what would become the vaunted Afrika Korps to the continent in February 1941.
[text_ad use_post=”2259″]

In North Africa Rommel proved to be a superb tactician, repeatedly outflanking his British and Commonwealth opponents and pushing them across hundreds of miles of desert to the Egyptian frontier. Rommel seemed to anticipate his enemy’s actions, and his reputation soared to near-mythical status. In the process, Rommel earned the nickname of the Desert Fox.

As Rommel’s Axis forces advanced, his overextended supply lines, continually harassed by Allied air and naval assets, proved to be his Achilles heel. At the Battle of El Alamein in October 1942, his depleted forces faced a replenished and well equipped British Eighth Army under General Bernard Montgomery. The Axis defeat at El Alamein was a turning point of World War II.

A fighting retreat to Tunisia ensued, and by the time the remaining Axis forces surrendered in the spring of 1943, Rommel had been recalled to Germany and assigned command of the Atlantic Wall defenses in France and along the coast of Western Europe. The defenses were under construction, and an Allied invasion of France was expected in 1944. Rommel energetically supervised the construction and quickened the pace. However, when D-Day came on June 6, 1944, he was away from his headquarters, visiting his wife in Ulm, Germany, for her birthday.

During the Normandy Campaign, Rommel was seriously injured when his staff car was strafed by an Allied fighter. While he recuperated, he was implicated in the July 20, 1944, plot to assassinate Adolf Hitler. Rommel was give the choice of a show trial, conviction, and certain death as a traitor or suicide, a state funeral, and the assurance that his family would be safe. He chose suicide and died at Herrlingen, Germany, on October 14, 1944.

To date, Erwin Rommel’s legacy is that of an audacious battlefield commander who gained the grudging respect of his adversaries.