Japanese Ashigaru: The “Samurai of the Land”

Samurai were the elite warriors of Japan’s ruling class, and the foot soldier was generally of peasant stock; however, their status subtlety changed over the course of the 16th century.

In the 17th century samurai were elite warriors, members of Japan’s ruling class. They were born, not made; you had to come from a samurai family to be considered samurai. Their exalted status was proclaimed by the daisho, or matching pair of swords, each samurai proudly wore. The samurai were justly famous, but the backbone of any army was the Japanese ashigaru, or “foot soldier.” The foot soldier was generally of peasant stock, but his status subtlety changed over the course of the 16th century. The great warlord Toyotomi Hideyoshi was the catalyst for much of this change. Before Hideyoshi took power the average ashigaru was called “ji-zamurai,” or “samurai of the land.” A part-time soldier, most of his life was spent in the fields or in the rice paddies. A peasant farmer, the ji-zamurai would take up arms only at his lord’s command. Since agriculture consumed much of his time, the peasant ashigaru was usually poorly trained for military life. This would change with the advent of Toyotomi Hideyoshi.

By Talent or Luck, Hideyoshi Rose to Prominence

Hideyoshi himself had been a Japanese ashigaru, at one point even carrying the sandals of a great lord. Partly by luck, but mostly by talent, he rose from obscure foot soldier to the master of Japan. Hideyoshi was well aware that others might want to follow in his footsteps, and to prevent this he closed the door to upward social mobility. He had other concerns as well. Ambitious lords might want to contest his rule, easily raising rebel armies from the mass of armed peasants.

To neutralize this threat Hideyoshi ordered the “Great Sword Hunt” in 1585 and effectively disarmed the peasant population. Farmers were forbidden to possess swords, spears, or other implements of war. Hideyoshi’s Edict on Changing Status created a wide gulf between peasant farmer and ashigaru. The ashigaru was now a samurai, albeit a lower class one, a professional soldier forbidden to engage in any other kind of work.

The Japanese Ashigaru Still Contended with a Wide Social Gulf

On campaign or in battle the ashigaru could be identified by his simple armor, less elaborate and costly than that of his lord’s. Basic protection was afforded by the okegawa-do, a combination breastplate and backplate. The breastplate often was emblazoned with his lord’s mon or personal badge, which proclaimed the ashigaru’s allegiance and provided a kind of uniformity that otherwise would have been absent. The Japanese foot soldier had less protection than his lord did. Generally the ashigaru would not wear haidate (thigh guards) or suneate (shin guards) like upper-class samurai.

Wearing Many Hats on the Battlefield 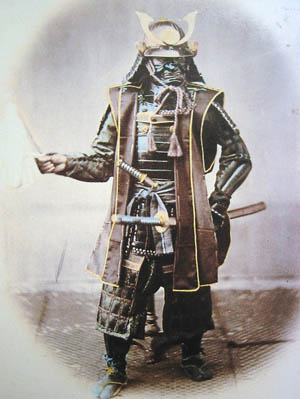 The distinctive badge of a Japanese ashigaru was the iron jingasa (war hat), a triangular helmet reminiscent of a peasant’s bamboo sun hat, was worn in the fields. By contrast the higher status samurai wore an elaborate kabuto (helmet), and often added a gargoyle-like face mask. The face mask was intended to frighten the enemy and give the wearer a fierce look; often it was painted red to signify anger. Of course, the samurai paid for all this splendor; the face mask was often hot, uncomfortable, and restricted the wearer’s vision.

There were three basic categories of fighting ashigaru: spearmen, archers, and musketmen. Spearmen wielded pole arms that were around eight feet long. Some of these spears were so long they could be termed pikes; the “business end” varied in size and shape.

From Bows to Artillery

Archers were highly trained, since it takes time to achieve proficiency with the bow. Bows were about seven feet long, and made of a composite of wood and bamboo for flexibility. There were about a dozen kinds of arrowheads, though most were made of stone. Some arrowheads were barbed, and some were designed to pierce armor. A special kind of hollow-shaft arrow produced a whistling sound that was supposed to frighten the enemy.

Arquebuses—matchlock muskets—were introduced into Japan by the Portuguese in 1542. Matchlocks were clumsy, and the smoldering matchcord needed to ignite the powder was vulnerable to rain and damp. Still, matchlocks were effective weapons during the 16th and early 17th centuries.

There was actually a fourth ashigaru category, that of artilleryman. The Japanese were aware of Portuguese cannon types in the 1550s, if not earlier, and in time European artillery was highly prized. Japanese cannon based on European models tended to be inferior copies of the originals. In any event, artillery was so heavy it was used almost exclusively for siege operations. It was during sieges, like that of Osaka, that artillery really came into its own. (Read more about the military classes throughout the ancient world inside Military Heritage magazine.)