Both British and U.S. soldiers liked the Thompson submachine or 'Tommy' gun for its rugged dependability and knock-down firepower, and it was certainly in the fighting across Europe that the Thompson excelled.

In 1917, when America entered the First World War, the United States Army tasked Brigadier General John T. Thompson, Chief of the Small Arms Section of its Ordnance Department, with designing a short-range, rapid-firing, large capacity infantry trench weapon. The general turned the job over to his own firearms firm, the Auto-Ordnance Corporation (AOC). Thompson and his team determined the .45-inch Automatic Colt Pistol cartridge used in the Colt M1911 semi-automatic pistol provided the most suitable rounds for the automatic weapon they envisioned. Due to the ammunition slated for the new weapon, the term “submachine gun” came into general use, referring to the Thompson gun’s sub-rifle caliber cartridge and its capability for fully automatic fire.

Annihilator: Origins and Development of the “Thompson Gun” 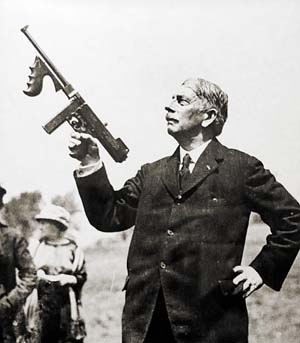 AOC manufactured the first working model, the “Annihilator I,” in 1919. It bore many hallmarks of later Thompson guns: a slab-sided receiver, rear and forward pistol grips, modified Colt M1911 box magazine and top-mounting cocking handle. Its rate of fire was 1,500 rounds per minute (rpm) and could only be fired in full automatic mode, but did not have cooling fins fitted, vital on a gun capable of such a rate. A modified version, the “Annihilator II,” and its variants, officially known as the M1919, soon appeared sporting the innovative Blish locking system (or sliding breech-block), a selector switch for full or semi-automatic fire, a blade foresight, finned barrels, removable front grip and a receiver machined with slots to insert the newly designed 20-round boxed magazine, as well as a 50- and 100-round drum. Altering the angle of the Blish lock reduced the rate of fire to 800 rpm, but the piece comprised only 11 major moving parts.

Christened by its inventors the Thompson Gun—and colloquially referred to as “Tommy guns”—General Thompson contracted with the Colt Patent Firearms Company to produce 15,000, at cost of $38.25 per gun. The first Colt Thompsons came off the manufacturing line in March 1921, each designated as “Model 1921A”. The weapon weighed 10 pounds 4 ounces, and as with all the Thompson models, its effective maximum range was 50 meters.

Through the early 1920s, General Thompson tried to sell his invention to European nations, but he had better success in the U.S. In 1926, AOC received orders for Thompson guns for both the United States Post Office and the Marine Corps. (The Marines guarded the mail trains, which needed armed protection due to a string of violent armed robberies that swept the country in the 1920s). Later, AOC delivered 1,500 Thompsons to the Navy. Additional sales in the commercial market were made to land owners such as Western ranchers, law enforcement agencies, and of course, organized crime syndicates.

The Tommy Gun Goes to War 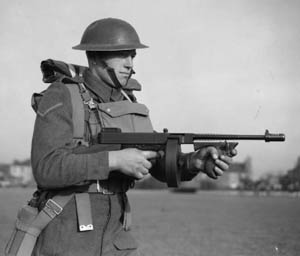 A widespread lack of infantry weaponry for all armed forces in World War II prompted the U.S. Army to contract with the new owner of AOC, Russell Maquire, for 20,405 Thompson guns, now designated the M1921A1. By early 1942, half a million Thompsons had been manufactured. (By this time, the “Tommy gun” became the most famous submachine gun of the war. AOC was quick to see the importance of the nickname and quickly patented it). The majority of those deployed were the more soldier-proof Model 1928A1, and starting in that year, the famous Model M1A1. These were made more cheaply and robust than the 1928A, and had fewer parts. The former could fire 725 rpm, while the latter model shot at a rate of 600 rpm.

As the only submachine gun in its inventory, the Tommy gun was used by the early in World War II. It was perfect for close-quarter fighting and usually fired from the hip. In the jungles of the South Pacific, U.S. Marines used the gun in conjunction with the Browning Automatic Rifle (BAR) to good effect: the former’s tracer rounds acted as a passable target marker for a squad’s BAR man.

British Commandos and U.S. GIs in Europe both liked the Thompson for its rugged dependability and knock-down firepower, and it was certainly in the fighting across Europe that the Thompson excelled. It worked best in a temperate climate, and proved its worth many times over in the house-to-house combat of Italy and Northwestern Europe. Soldiers quickly developed effective fire tactics to use their M1A1s to maximum effect. For example, soldiers armed with the semi-automatic M1 Garand Rifle were often placed on point, with Thompson-armed men behind, more M1s following, and an M1 Carbine in the rear. This combination provided a comprehensive fire pattern, with long-range shooting suited for the Garand, close work by the Thompson, and intermediate range fire by the .30 caliber BAR. 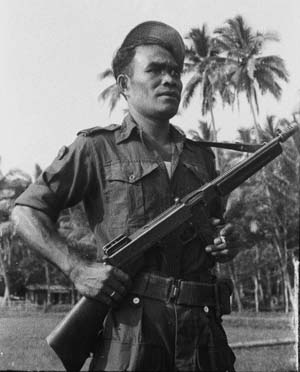 Thompsons in Foreign Service: Problems on the Russian Front

The Thompson entered British service in with the U.K.’s Commando units in early 1941. In addition to the original 100,000 sent to England, free French forces training in Britain received 6,000 of their own, as were Chinese forces fighting the Japanese. The Allies also sent enormous numbers of M1928A1s to the Soviet Union after Operation Barbarossa, the German invasion of Russia, in 1941. Unfortunately, these were never used, due to the Tommy gun’s inability to perform in Russia’s sub-zero climate.

The End of the Line

In 1942, the high cost of the Thompson gun—$108.00 per unit—caused the U.S. Army to introduce a replacement in the form of the M3 “Grease Gun”: its stamped, wielded and riveted construction was far cheaper to produce than the Thompson. After producing 1,387,134 since 1938, manufacturing of the Thompson ceased in 1944.

3 thoughts on “The Thompson Gun’s Curious History, from World War I to World War II”