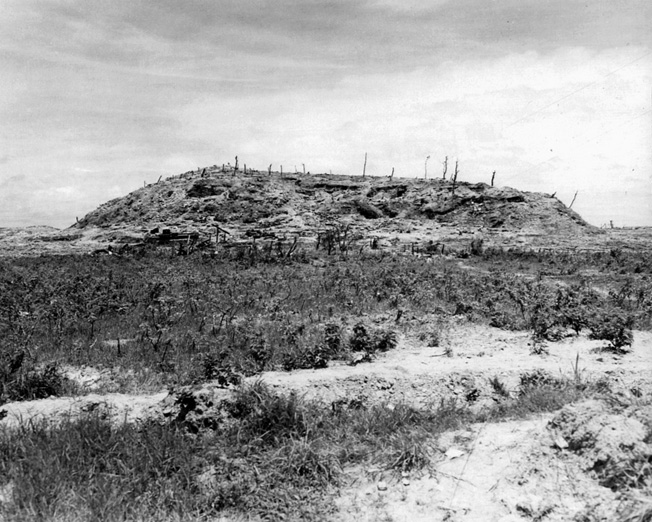 Colonel Hiromishi Yahara was third in command of the Japanese defenses on Okinawa. Read all about his story below.

It was Colonel Hiromishi Yahara who designed and implemented the jiykusen, or the yard-by-yard battle of attrition that cost the American forces so many casualties in the three-month battle, and he was the highest ranking officer to survive the battle and make it back to Tokyo. Before the overall commander on the island, Lt. Gen. Mitsuru Ushijima, committed ritual suicide in the battle’s final days, he instructed Yahara to escape to Tokyo to make a final report to the emperor.

Yahara was captured by the Americans, which bothered him immensely—to be captured or to surrender was considered a disgrace to one’s family—but eventually he did return to Japan. In 1973, Yahara still felt strongly that the garrison at Okinawa, as well as the people of Okinawa themselves, had been betrayed by Imperial Headquarters in Tokyo. Because he faced personal attacks for surviving the battle, Yahara decided to write a book to set the record straight.

The result is a fascinating and unique look at the last, decisive battle of the Pacific War, written by a surviving member of the defeated Japanese command on Okinawa. Yahara was a gifted and meticulous strategist, highly respected by his peers. Because he had spent two years in the United States as an exchange officer prior to World War II, he knew his enemy better than did his superiors at Okinawa, Ushijima and Maj. Gen. Isamu Cho. Yahara makes a startling revelation in the book regarding the events surrounding the American landing on Okinawa on April 1, 1945. According to Yahara, the plans drawn up in Tokyo called for Japanese air power to play the decisive role in the battle for Okinawa prior to the actual landing. Japanese planes flying from the mainland along with aircraft launched by the Japanese Combined Fleet—conventional fighters and kamikaze suicide attackers—were supposed to strike the U.S. Fifth Fleet offshore prior to the landing and annihilate the American landing forces while they were still in their ships. The 32nd Imperial Army entrenched on Okinawa was to play a minor role, mopping up the survivors of the American landing forces as they struggled ashore. To Yahara, the failure to launch the promised air attack on April 1 sealed the fate of the island’s garrison—it never had a chance for victory. Hundreds of thousands of Okinawan citizens had been betrayed as well, Yahara believed, sacrificed to the whims of the Japanese high command.

Yahara’s Unique View of the War

Although his love for his country never wavered, Yahara was unique among his peers. He fully recognized the flaws in traditional Japanese military thinking—the Bushido code, or way of the warrior—and he was disgusted as he watched his superiors repeat the errors of previous eras. The Imperial Army had a “blood and guts” mentality; it had been undefeated since winning the Sino-Japanese War in 1895. To the Japanese militarists’ way of thinking, the combination of Japanese spirit and the willingness to die for the emperor would overcome any material advantage enjoyed by an enemy.

Yahara was convinced that the initial Japanese strategy for Okinawa—depending on air power—would fail. Japan’s air forces were seriously degraded by early 1945, and it had lost many experienced pilots. American aircraft were now technically superior, and Japan’s navy was down to just a few surviving carriers. Yahara believed that the only chance for his country’s survival lay in the proper use of its remaining ground forces. After the promised air assault scheduled for April 1 did not materialize, he went ahead with his planned defenses on the ground. He would fight for time, making the invaders pay dearly for every inch of ground, to allow Japan to prepare its defenses on the main islands for the Allied invasion that was sure to come. Yahara’s tactics on Okinawa would utilize the island’s terrain, which was perfectly suited for defense, to wage an ugly war of attrition. His soldiers would go underground in caves and concrete bunkers to survive air, artillery, and naval gunfire, and then battle American ground forces for every inch of island real estate. His intricate, multi-layered defensive positions and the tenacity of the 110,000-man 32nd Army combined to prolong the battle for three long and exceedingly bloody months.

In his book, Yahara admits that he despised both the self-delusion practiced by his superiors and the false propaganda foisted upon the Okinawan people, who were told that capture by American troops would result in rape, torture, and death, to which suicide was preferable. Thousands of Okinawan men, women, and children were ordered to stay in caves alongside Japanese troops, who were preparing to fight a last-ditch defensive battle. The flower of the island’s youth—boy soldiers and teenaged girls who worked as nurses’ aides—were sacrificed to the directives of the Japanese commanders. In many cases, they were forced to hurl themselves from the low southern cliffs into the sea so that they, too, could die for the emperor.