'Operation Deadstick' was the codename for the British glider assault operation to capture two Normandy bridges, one of which was Pegasus Bridge.

This article was provided by Martin Cherrett, whose blog, World War II Today, provides a unique way military history enthusiasts can understand and experience the Second World War. His real-time chronicle focuses on individual incidents and experiences as they happened 70 years ago. This entry focuses on Operation Deadstick, and the Allied assault and capture of Pegasus Bridge.

The Allied plan to invade Normandy in 1944—codename Operation Overlord—was dramatically revised in January 1944 when the Supreme Allied Commander Dwight D. Eisenhower took charge of the enterprise, together with General Bernard Montgomery, who commanded the land forces. They expanded the amphibious landing area, which led to the inclusion of Omaha and Utah landing beaches, and they also wanted the flanks of the invasion area protected by airborne troops. The U.S. 101st and 82nd Airborne Divisions were to protect the western flank, closest to Utah beach whilst the British 6th Airborne Division protected the eastern side, closest to Sword beach. 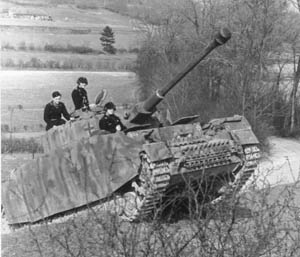 Adolf Hitler had pioneered the use of glider-borne troops during 1940, when they assisted his ‘Blitzkrieg’ through Belgium and France by seizing key strongpoints and bridges ahead of his advancing panzers. Britain and the USA had moved swiftly to develop their own paratroopers and glider troops after that—but their first major deployment, during the invasion of Sicily, had been marred by navigational problems, ‘friendly fire’ and heavy casualties.

Gliders offered the chance to let a concentrated force of troops surprise and overwhelm a specific target, but they were a low, slow moving target themselves on their approach path. Many senior officers in the RAF believed that the pinpoint navigation that was necessary to get gliders close enough to the target to achieve surprise was simply impossible—especially for a night attack. Other critics argued that once on the ground such a force would still be too lightly armed to withstand counter-attack.

What Happened During Operation Deadstick

Operation Deadstick was to demonstrate how wrong the critics could be. The Glider Pilots Regiment was part of the British Army not the RAF, although they relied on RAF planes to tow their gliders to within six miles of the target.

If the western flank of the Normandy invasion area was to be protected by airborne troops they would need to be rapidly re-inforced by armour once it had arrived by sea. To ensure the path from the sea to the landing grounds was secure meant seizing critical bridges in the early part of the operation. The bridges over the Caen canal and the parallel Orne river were known to be defended by permanent German strongpoints and most probably were mined ready to be blown up. They would have to be seized by surprise early in Operation Tonga—the overall British plan for their airborne landings—before the German defenders had been put on alert.

So it was that Sergeant Jim Wallwick found himself flying the leading Horsa glider 6,000 feet above France just after midnight on the night of 5th-6th June 1944. He had practiced the flight following release from the Halifax bomber ‘tug’ forty two times back in England . Once they were free flying he depended on his co-pilot John Ainsworth to time his pre planned ‘run in’ precisely on a stop watch—”5-4-3-2-1-bingo, right turn”. At 15 minutes past midnight he could just see the bridge in the dim moonlight but he realised they were going too fast – “Stream” was his command to Ainsworth to release a parachute to slow them down, two seconds later “Jettison” let it go, after it had done its job.

All Over by Half Past Midnight

At 16 minutes past midnight they were on the ground just 50 yards from the bridge. Wallwick and Ainsworth were pushed through front of the shattered cockpit and injured—but in the back Lieutenant Brotheridge and his platoon of 30 men from the Oxfordshire and Buckinghamshire Light Infantry were out and charging the German strong point as soon they came to a standstill. Less than a minute later a second glider with another platoon landed right behind them, a third glider nearly crashed into the second but skipped over it and crashed, killing one occupant, Lance-Corporal Fred Greenhalgh.

By half past midnight it was all over, the Caen canal bridge was intact and in British hands, the explosive charges intended to blow it up still in their boxes in the guard house. Surprise was virtually complete but, in a brief exchange of fire, 28 year old Den Brotheridge had been killed, shot through the neck as he ran across the bridge towards the German guard post on the other side – the first Allied combat casualty on D-Day. Three other gliders had successfully seized the nearby bridge over the River Orne.

Within days the British Army had signposted ‘Pegasus Bridge’, honouring the shoulder badge of the Airborne troops, a route eventually taken by hundreds of thousands of British and Canadian troops as they moved east out of the Normandy bridgehead. The French were to adopt the same name for the bridge when the war ended. Today it remains the key location to remembering the battles of the 6th Airborne Division securing the eastern side of the Normandy battlefield.

2 thoughts on “Operation Deadstick: the Capture of ‘Pegasus Bridge’”