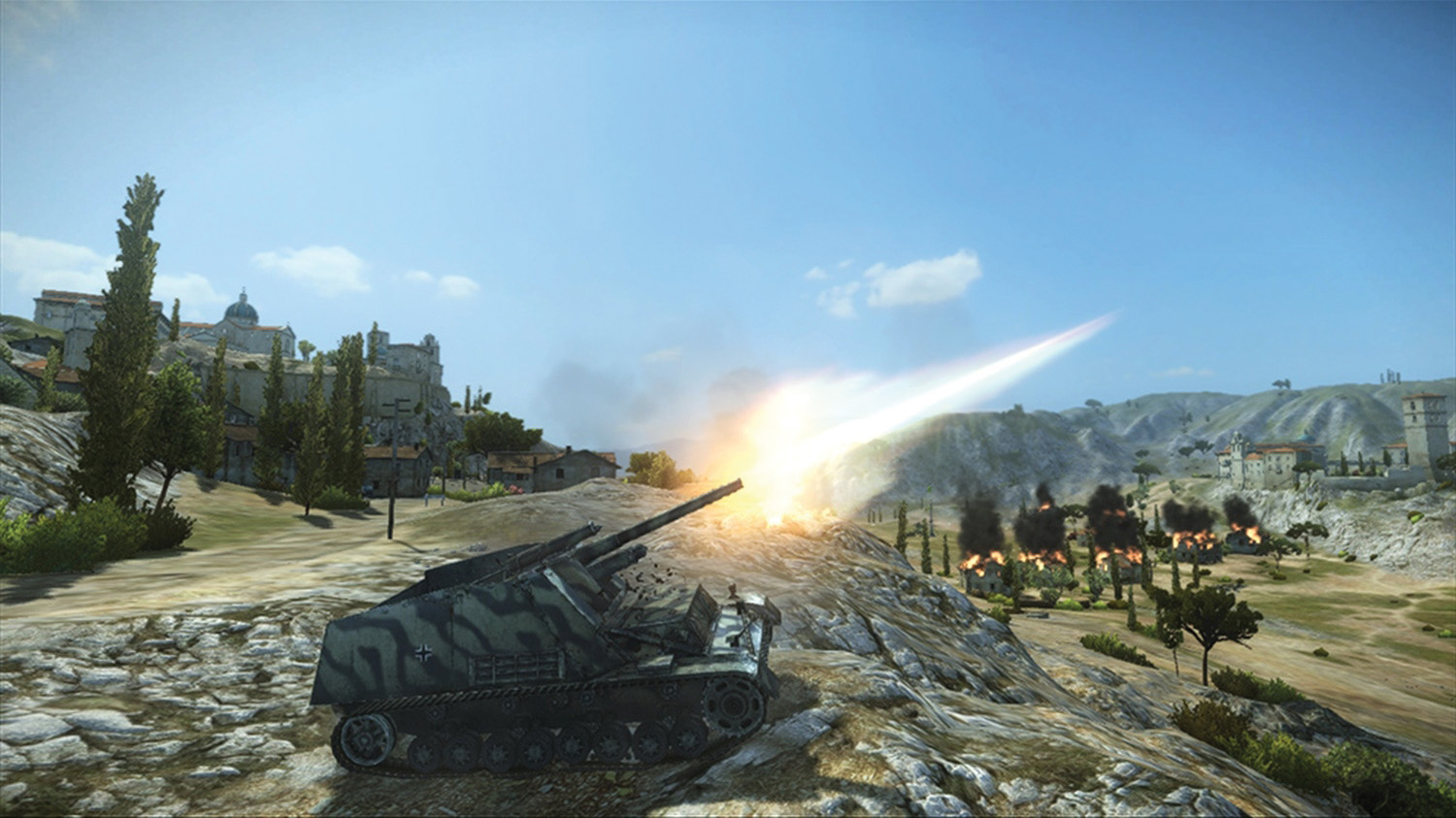 Things have been moving along nicely for Wargaming.net’s hugely successful massively-multiplayer online game World of Tanks. It was already doing plenty well on PC, but its recent arrival on Xbox 360 finally brought it to a hungry console audience. In addition to getting a chance to experience the same addictive tank-based action on 360, World of Tanks remains a free-to-play game, so there’s no reason not to download it and give it a shot if you’ve thus far been left out of the PC fun. The only catch is you’ll need an Xbox Live Gold account, but that shouldn’t be a problem for anyone who’s into multiplayer gaming enough to want to try World of Tanks in the first place. If that’s still an issue, there is a seven-day timed trial for all account holders.

Published by Microsoft and developed by Wargaming West (formerly known as Day 1 Studios), World of Tanks: Xbox 360 Edition officially made its public debut in mid-February. This version was built specifically for Xbox 360, so there was plenty of care put into how it handles in its new home, including appropriately revamped controls. There’s also a new user interface and a matchmaking system that takes advantage of 360’s specific online features. In other words, it’s not too much of a pain to get online and get a game started. 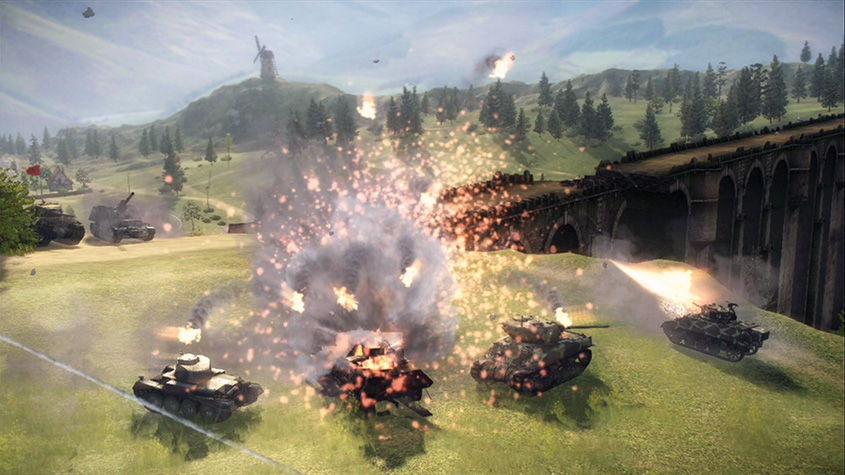 As is the case with any online game like World of Tanks, just because it’s out doesn’t mean what you see is simply what you get. While the game launched with over 100 tanks from the United States, Germany, and the UK, future DLC will expand the lineup with new nations, more tanks, and other additions.

Coming to Xbox 360 could certainly be seen as an improvement by many, but the real World of Tanks improvements hinted at in the headline are coming to the game itself. Wargaming has big plans for 2014, with producer Mike Zhivets dubbing it “a truly transformative year for the game.” More specifics will be rolled out as the months go on, but a few enhancements we can look forward to include a revamped graphics renderer that promises to add a greater level of detail to vehicle models and a more realistic gaming environment. On the technical end, there will be improvements made to the physics engine, as well as enriched gameplay such as the oft-requested Historical Battles and new Fortified Areas meta game functionality. 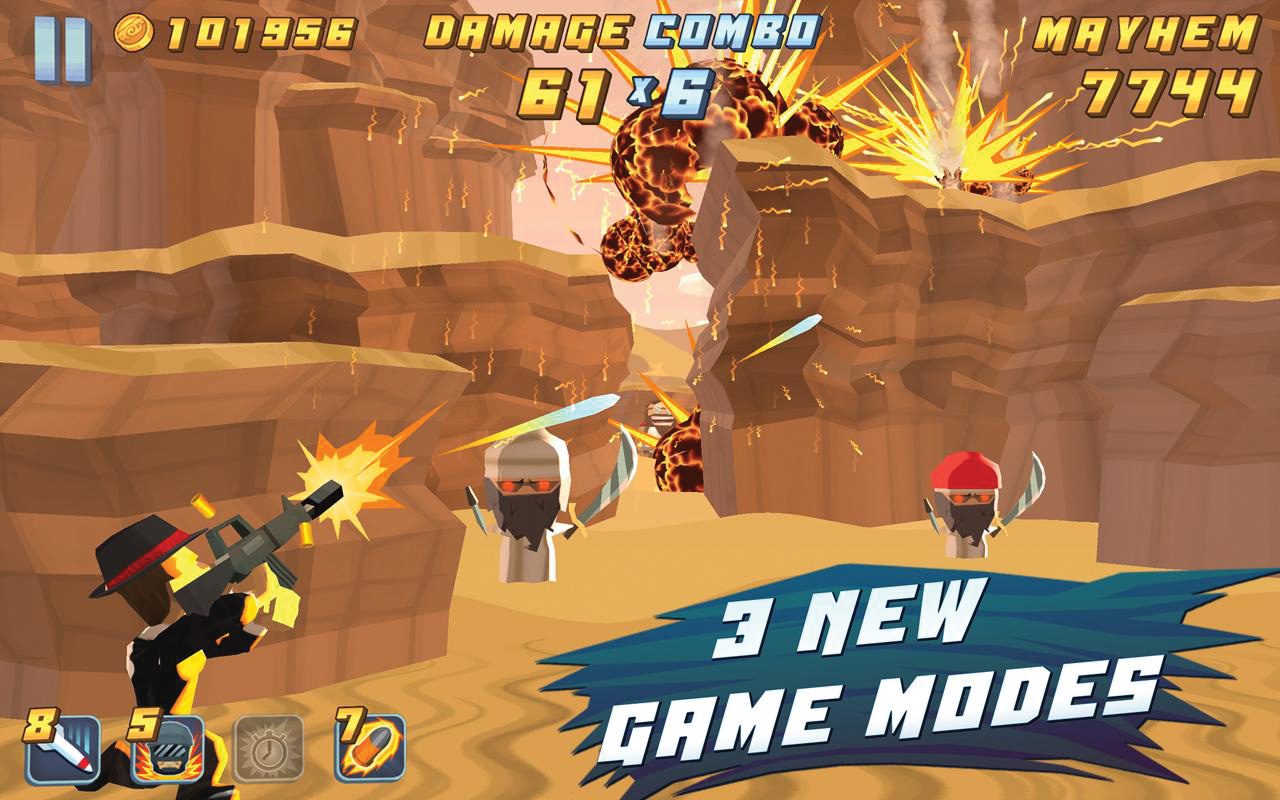 Here’s something a little lighter than our usual fare. Okay, it’s a lot lighter, but Major Mayhem is worth recommending to anyone looking for some casual military-themed shooting action on their mobile devices. Available from Adult Swim Games on both Android and iOS platforms, Major Mayhem takes a very clichéd Hollywood—or, perhaps more appropriately, the Hollywood typically appropriated for 8-bit NES and arcade games in the ‘80s and ‘90s—approach to warfare, with the president sending you into deep combat across a variety of locales. You’ve got strict orders, soldier, to save both the nation and … your girlfriend. Naturally.

Major Mayhem is a side-scrolling on-rails shooter that draws inspiration from a number of existing titles, from light-gun games like Lethal Enforcers and Operation Wolf to modern cover-based shooters like Gears of War. The catch in this war, however, is that the enemies popping out of the jungle trenches are typically quick-draw ninja, and you’ll have to be a quick screen-tapper to rake in enough points to rank up and hit the high-score leaderboards. 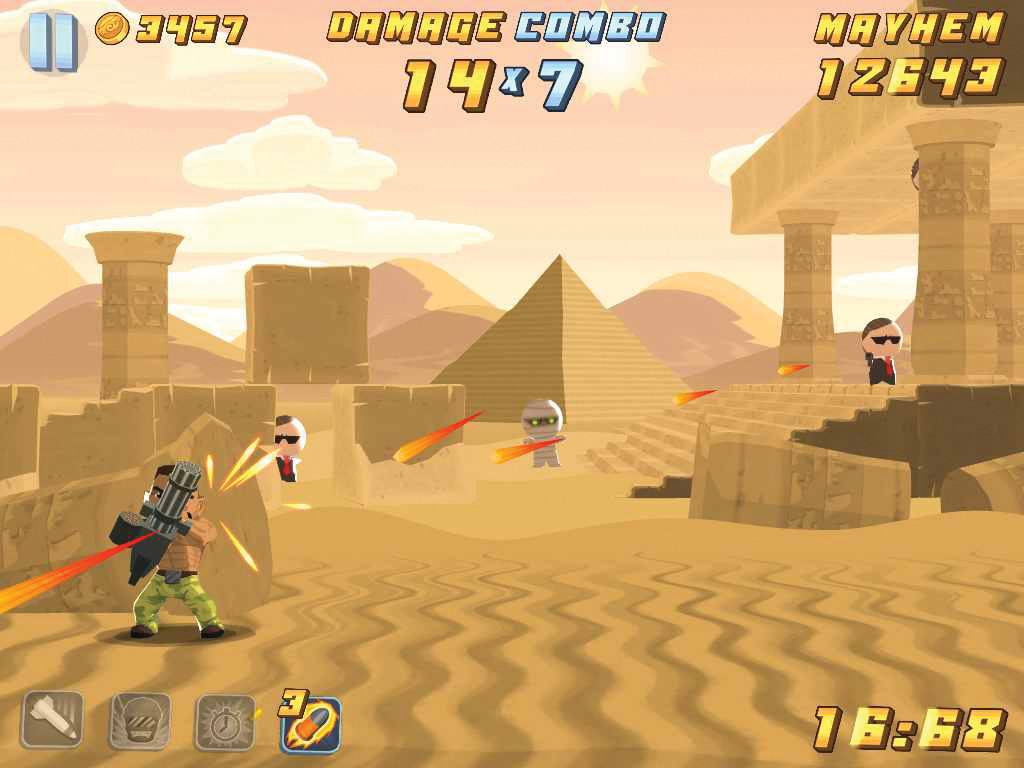 The mechanics are simple but extremely satisfying. This is the kind of experience tailor made for touchscreen time-wasting, and like any mobile game worth its salt, it can be dangerously addictive. Power-ups keep the constant shooting and dodging from getting too stale. Some pump up the power of your bullets, while others can turn you into a knock-off Robocop, send you into Hong Kong film/Max Payne-style bullet time mode, and more. It’s all presented with slick-looking cartoony visuals and the always-encouraging sound of points and multipliers popping up at every turn.

Micro-transactions are the only true red mark on an otherwise stellar game, but it’s free so they should be expected. On the plus side, they’re not particularly intrusive, and are only there for folks who wish to skip all the playing and get right to a more powered-up Major Mayhem. In general, I don’t care for the practice, but they’re not done in a heinous or nefarious way here, so it’s up to the user to ignore them if they’d rather just enjoy it the normal way. There’s plenty of content to play through legitimately so you might as well get that trigger finger primed for tapping. 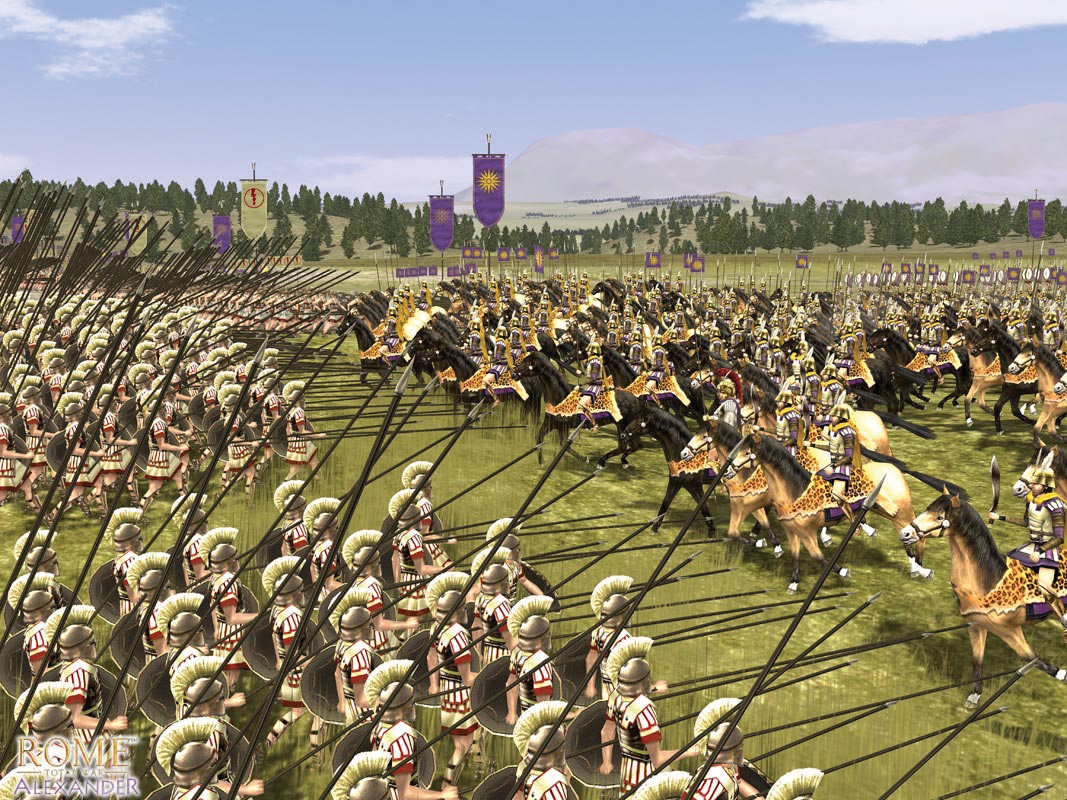 The Creative Assembly has enjoyed plenty of acclaim over the years for its Rome: Total War strategy series, and the Alexander expansion finally made its way to Mac courtesy of developer Feral Interactive’s port. For those who haven’t played it, the DLC puts players in the role of one of the greatest commanders of all time, Alexander the Great, replaying his mighty conquests and battles from 336 to 323 bc, starting with his ascension to the Macedonian throne.

Alexander introduces 50 new units—including the Persian Immortal Infantry, Indian War Elephants, and Macedonian Companion Cavalry—and the playable armies of Macedon, Persia, India, and Dahae. In addition to the campaign, you can take on the AI in custom battles or try your luck against real opponents via LAN multiplayer. One of the best aspects of Alexander is its rapid pace—after all, you’ll need to match Alexander’s speed and complete your single-player conquest in 100 turns—so strategy fans who prefer to play on Mac (and own Rome: Total War—Gold Edition) should find their hands full.