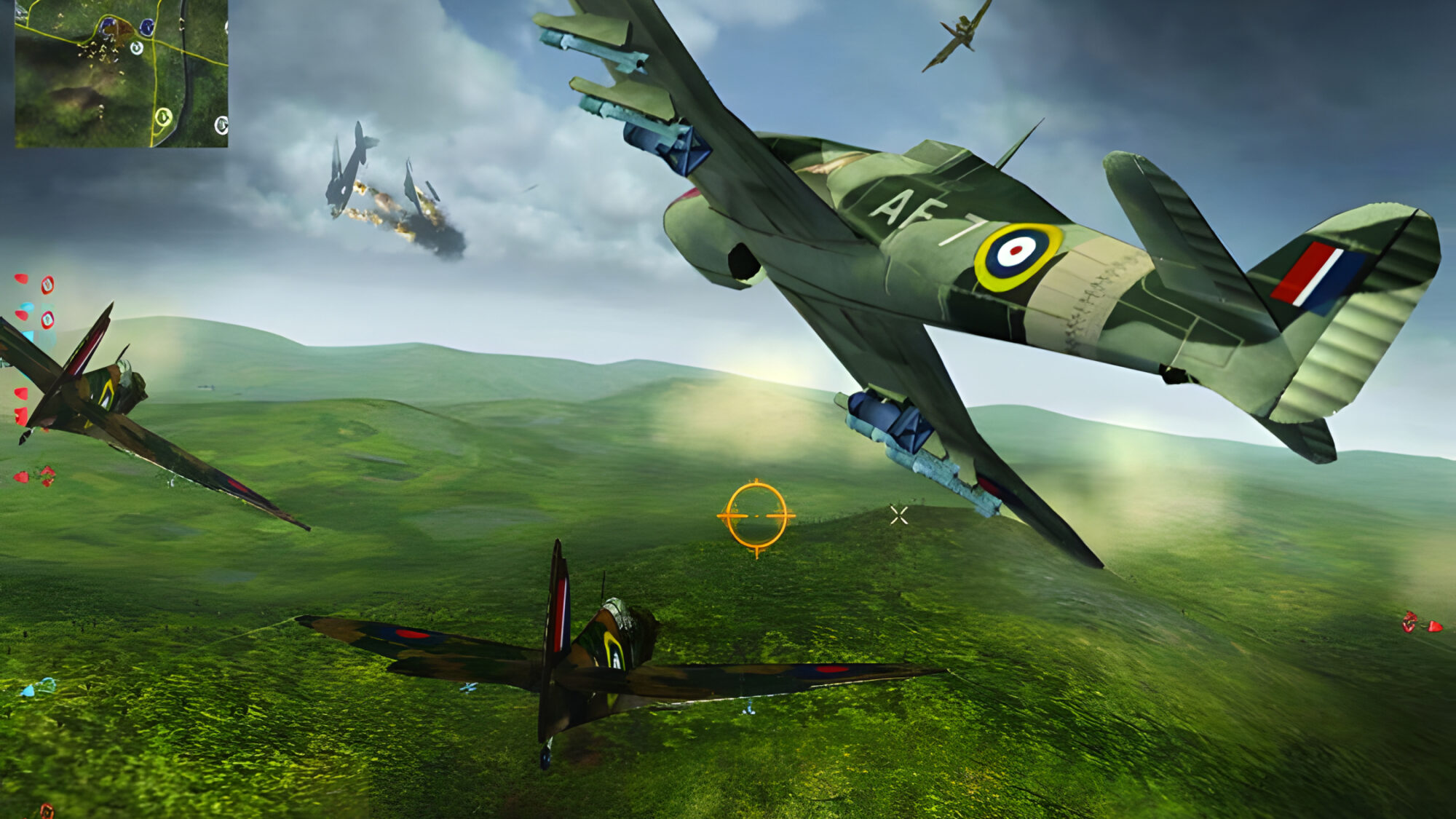 Making War On The Wii

Options for World War II-related gaming run pretty thick if you do the majority of it on PC. The same can be said, albeit it to a lesser (and more action-oriented) extent, across most of the major consoles. I say “most of” because the original motion-control innovator, Nintendo Wii—having since begat both Playstation’s Move and 360’s Kinect—often gets left out of all the war-time action its high-end competitors enjoy. Even when Wii does get major releases, they tend to be neutered to some extent. Take the Call of Duty games for instance; I’d wager most people choosing to play those on Wii rather than Xbox 360, Playstation 3, or PC are doing so because, well, there’s no choosing involved. It’s their only option.

So does that leave those with Nintendo’s system as their primary platform completely bereft of ways to wage their own personal take on World War II? Not entirely. While you may never see in-depth strategy simulations on the aim-and-click tip, there are still some current and upcoming titles appropriate both for those with thoughtfully itchy trigger fingers, and silicon soldiers that just want to take to the skies. 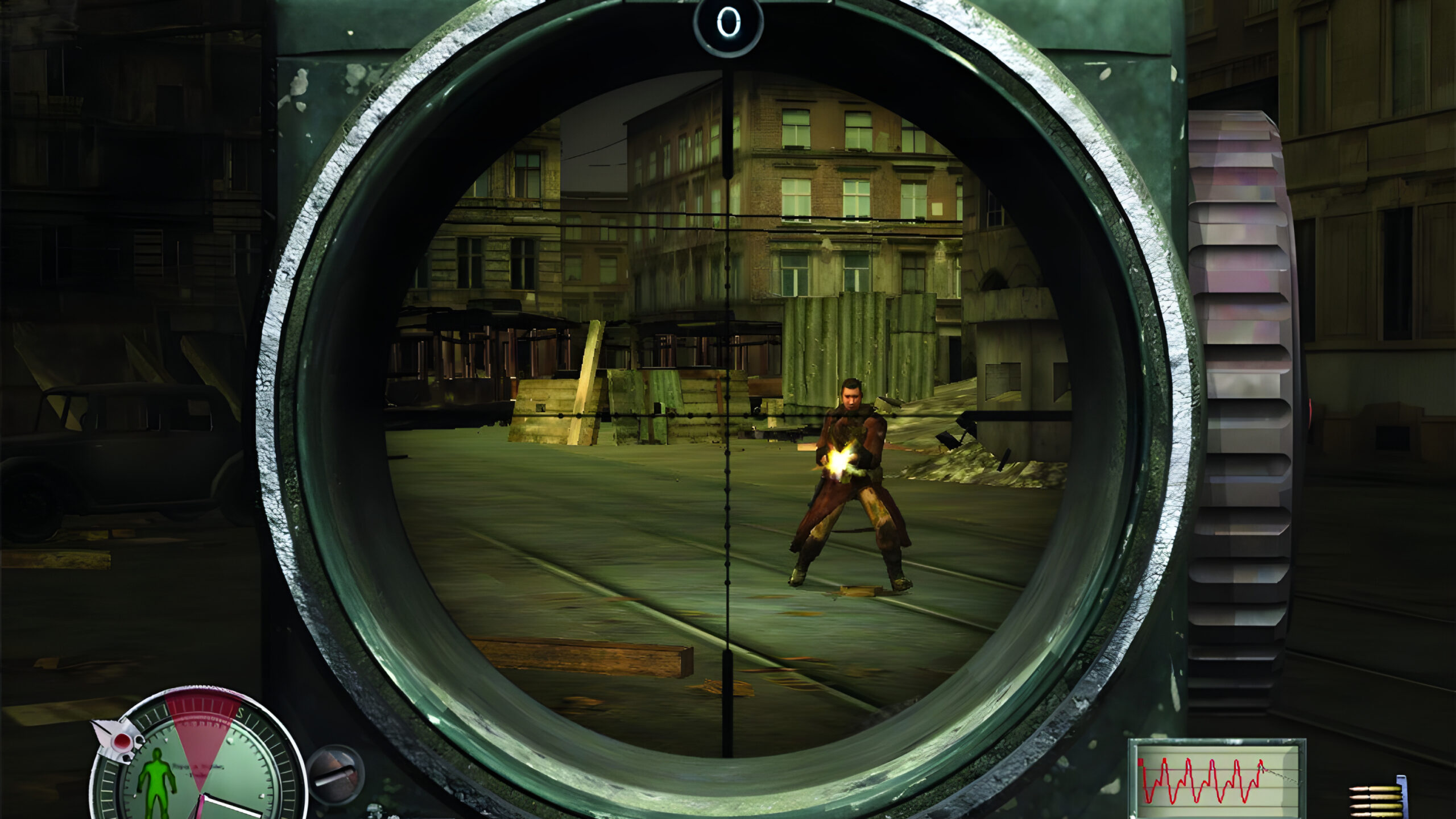 The premise of Sniper Elite takes the player to the tail end of World War II, with the Soviets and Germans locked in a fierce conflict. As Karl Fairburne, your mission is to stop the Soviet Union from seizing Germany’s nuclear secrets at any cost. Those behind Karl’s mission haven’t left him to fend completely for himself, with help coming from the German resistance in his fight against Soviet forces and the Nazis.

This adds up to something quite unlike the kind of white-knuckle run-and-gun war shooter most are accustomed to. It’s often a game of stealth and patience, the latter especially coming into play when it’s time to go to work and prove you’re worthy of such a laudatory title. Realism is a major component to Sniper Elite, making it more than simply lining up shots and pulling the trigger from great distances. You also have to take things like wind, gravity, and even your breathing into account before squeezing out that killing shot. And what a killing shot it will be, with the camera tailing the bullet all the way to its gruesome but necessary destination.

It should be clear now that Sniper Elite is a fairly deep game as far as its genre goes, but that doesn’t make it any less strange a choice for a 2010 revival. The original performed an admirable tour of duty in 2005 across multiple platforms. Playstation 2, PC, and that old black beast known as the Xbox were all home to Sniper Elite, and it’s been distributed by the likes of Atari, Namco, and Ubisoft. Despite the decently high level of quality seen in the title’s past ports, it’s still difficult to ignore the fact that this is a five-year-old shooter, and a lot has happened across the gaming landscape since. Even on Wii, there are plenty of fresh franchises that downsize their triple-A titles and repurpose them for motion control, including the recently-released blockbuster, Call of Duty: Black Ops. 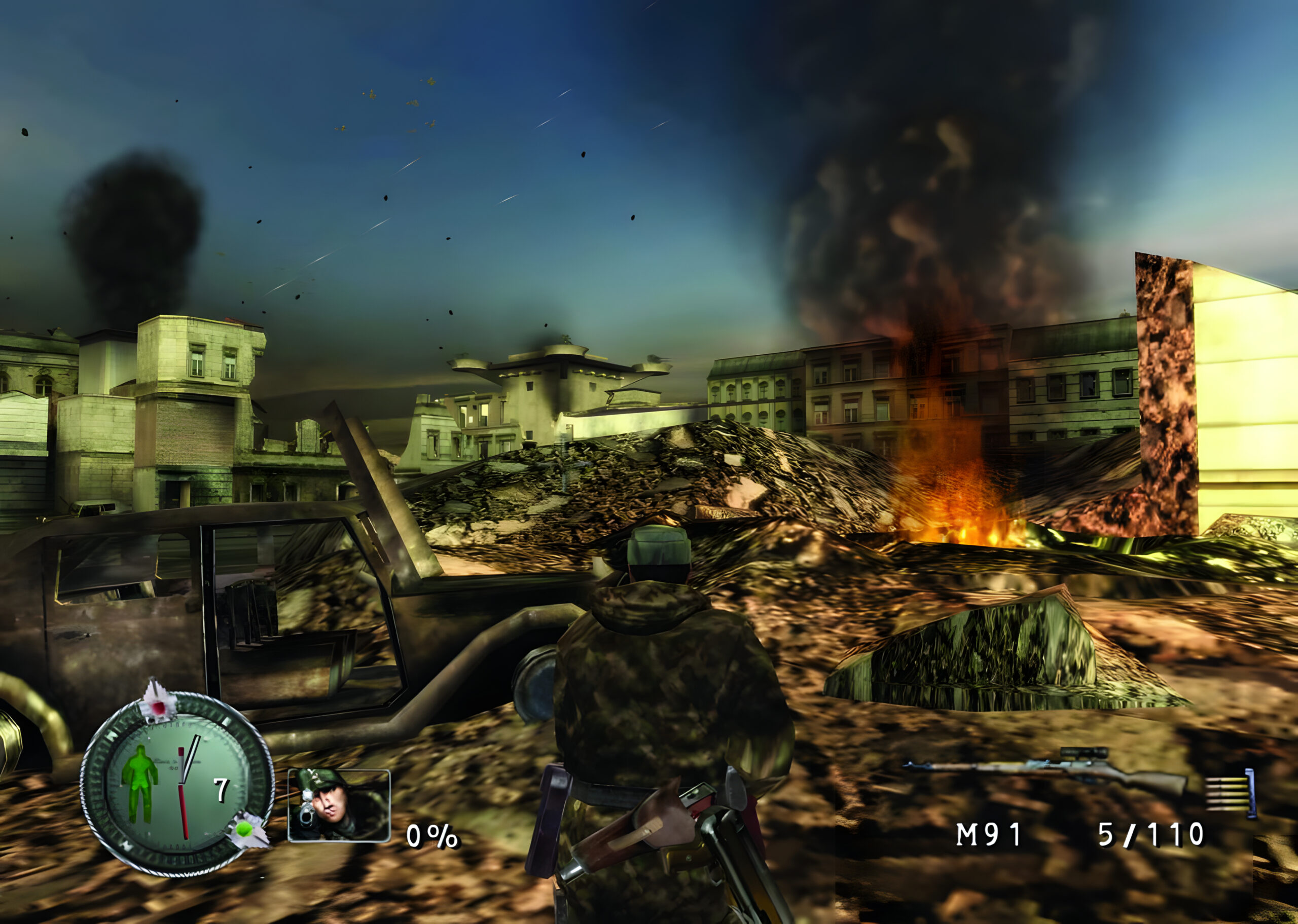 Things become less strange when you take the system’s track record into account. If there’s ever an aspect of a particular title that can be adapted into a remote-friendly setup, you can bet a publisher is going to capitalize on it. So now we have what is essentially the same title many people played five years ago, but updated to support both the standard Wiimote—point and aim at the screen as you would any other game—and the far clunkier Wii Zapper. Anyone out there who hasn’t tried out the Zapper yet may be considering picking one up for a game such as this, but let me stop you right there: stick to the Wiimote as is. CTA actually produces a Wii Sniper Rifle, but I can’t personally comment on the quality. I would be all over it, however, if it had a built-in scope screen like Konami’s arcade shooter Silent Scope! Needless to say, if you do have one, Sniper Elite is likely already a large blip on your radar.

Preferred method of blasting aside, individual enjoyment of Sniper Elite is ultimately going to hinge on how realistic you like your shooters. This makes for an interesting conundrum for Wii owners when you think about it. On a console primarily geared toward either a more forgiving or arcade-oriented style play, Sniper Elite fills in a sparsely populated niche. Its realistic and patience-testing take on the shooter could serve as a welcome alternative to the Call of Dutys and Medal of Honors out there, so consider giving it a hawk-eyed look when it’s time to choose your next battle. 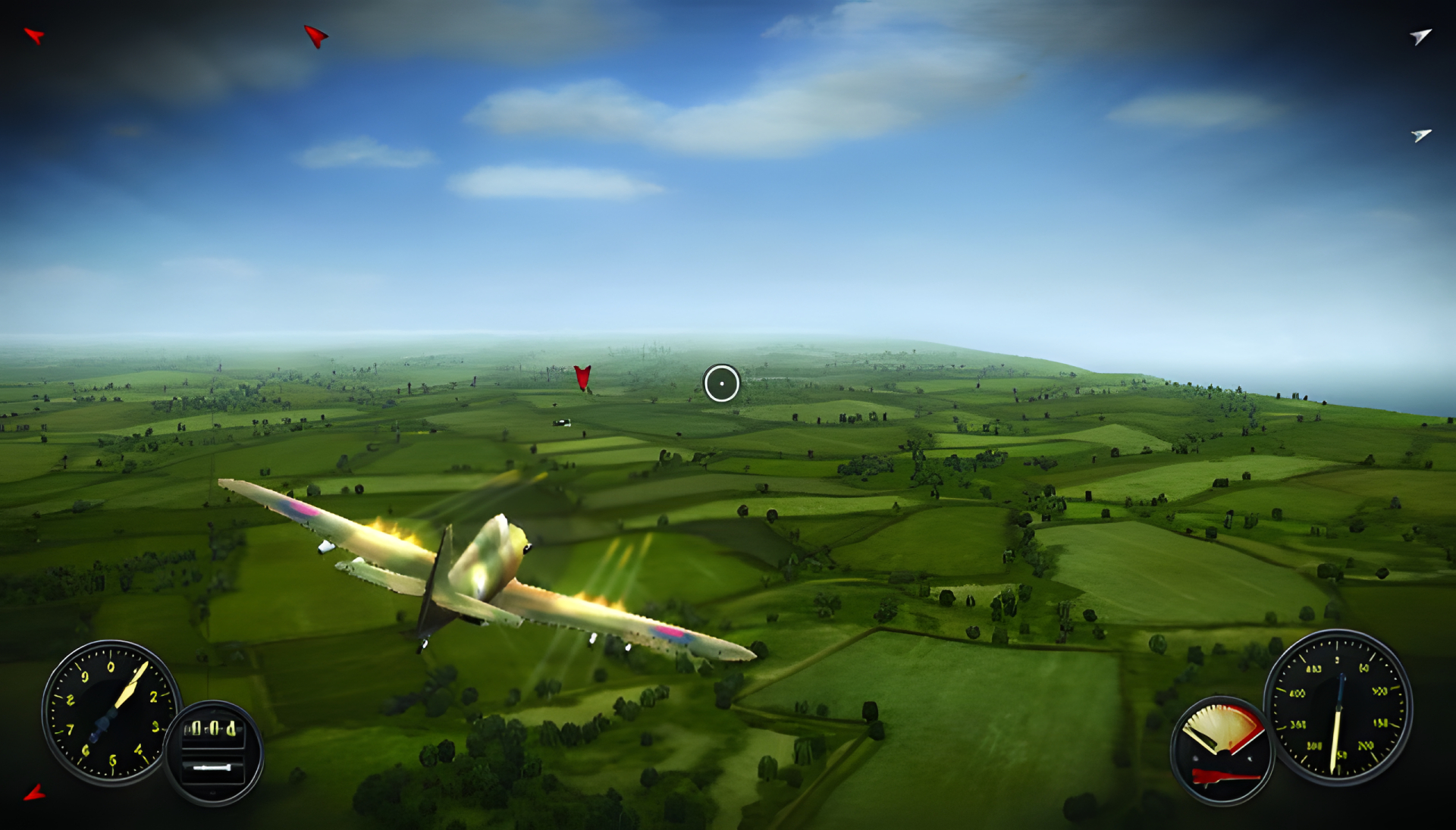 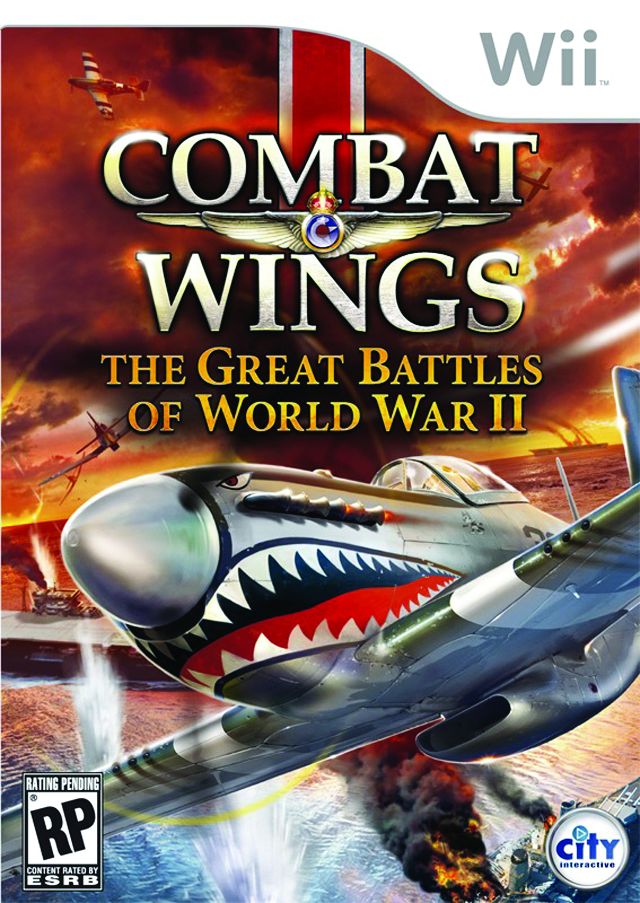 Well, here we are again with the elusive Combat Wings. It’s been quite some time since we last talked about this title in these pages, but with a U.S. release date now well into the early months of 2011, it’s definitely something that should remain on everyone’s watch list.

As the title implies, Combat Wings is all about experiencing the greatest airborne battles of World War II, from the Battle of Britain to the Pacific Theater. With those battles comes the assortment of mission types one would expect from a high-flying excursion through history. There are your straightforward dogfighting sorties, of course, as well as bomb runs and escorts, all spread out across more than 20 missions. The 25-plus aircraft in the game can be upgraded as you progress, and flown via two distinct styles of control: arcade or simulation.

Nintendo could use more ace examples of air combat on their console, as those that have graced it thus far have fallen into mixed camps. Motion control in flight games can be finicky unless the utmost care is provided, but conceptually it’s a no-brainer. Hopefully Combat Wings: The Great Battles of World War II will fill that aching void.