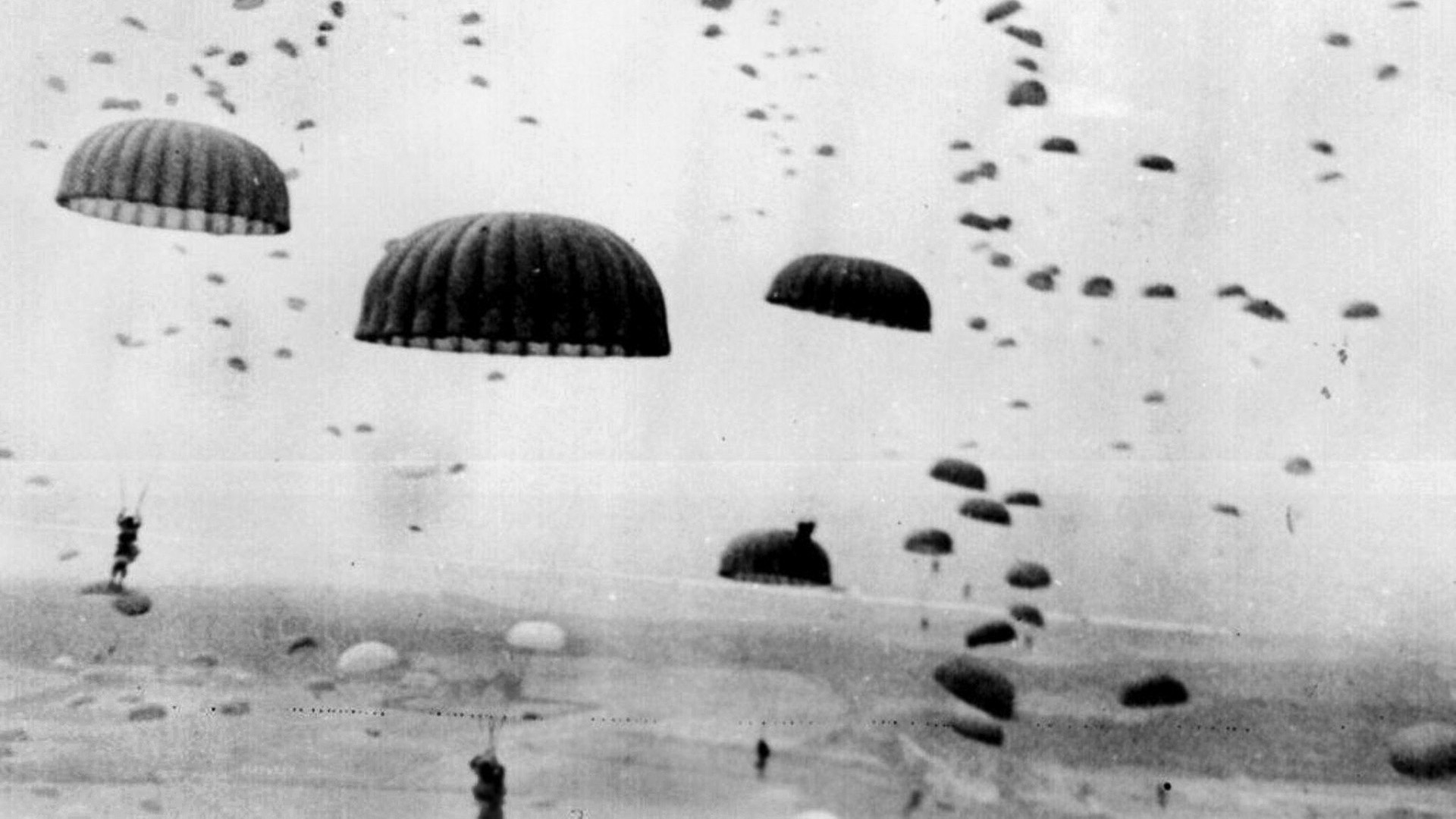 Dummy paratroopers did their part to help the Allies win World War II in the flak-filled skies over Europe and the Pacific.

Using parachutes to insert large forces behind enemy lines quickly fostered the idea of also using decoys to sow doubt and confusion. The earliest known operational use of decoy, or dummy, paratroopers occurred during the Nazis’ successful assault on Fort Eben-Emael during the 1940 blitzkrieg. Colonel Rudolf Witzig was a first lieutenant and commander of the sapper detachment involved in the attack on Fort Eben-Emael. He recalled that “a final stroke of ingenuity, characteristic of our thorough preparation, was the plan to drop by parachute several groups of uniformed dummies behind the Albert Canal to the west. As we had guessed, this caused considerable confusion to the Belgian command.”

General Major Gerhart Schact was a senior German officer whose early military career included the attack on Belgium. As a first lieutenant, he commanded an assault group at Fort Eben-Emael. Schact recalled that the “transportation plans were given a supplementary mission of dropping parachute dummy figures at a distance of forty kilometers from the objectives shortly after the landing of the gliders, in the area of the Fifth Belgium Division. This deceptive operation was successful, for during the decisive first hours it misdirected the attention of a large part of the Belgian army.”

The operations in Holland and Belgium were not the last time the Germans used dummy parachutists. In December 1944, Adolf Hitler ordered the use of a battle group of parachutists for action in the planned Ardennes offensive. The assault group included 300 dummy figures, loaded for drops north of Camp Elsenburg to confuse the Americans. Overall, the Germans’ airborne operations during the offensive were a resounding failure, but the deception effort was the most successful feature of the entire plan.

The Allies had started developing a paratroop decoy of their own in the late 1930s. The deception plans for Operation Overlord, the Allied invasion of Europe, included four airborne diversions using paratroop dummies. Operations Titanic I, II, III, and IV were designed to confuse the German high command and influence the movement of their forces and reserves. Operation Titanic I simulated the dropping of one airborne division north of the River Seine. The action was intended to draw enemy reserves from south of the Seine to the north. Two hundred dummies were dropped, along with noisemakers and Special Air Service (SAS) teams. The SAS teams conducted small assaults and cut communications, thus adding to the perception of a larger airborne assault.

Operation Titanic II deployed 50 dummy paratroopers and noisemakers. Its intent was to delay local reserves from moving westward toward the Allied landing beaches. Operation Titanic III used 50 dummies and accompanying noisemakers. It was designed to draw German counterattack troops to the southwest of Caen. It was to be accomplished in conjunction with the landing of the 6th Airborne Division. The final decoy drop was Operation Titanic IV; it was hoped that it would draw counterattack forces around St. Lo to the west. Another 200 dummies were used, supplemented with noisemakers. Again, two SAS teams were also dropped to create havoc and substantiate rumors of massive paratrooper landings.

The combination of decoys and commandos achieved many of the desired results. The dummies were described as being “in the shape of a man, but only about half size, because the dummy only had to be identified as a paratrooper in the air.”

George Freedman, an American manufacturer working on a secret British contract, made 3,800 of the dummies in 1938. He and his brother Fred operated a small fabrication business in Ashland, Massachusetts. A British Trade Commission agent approached them in 1938, and they agreed to secretly produce “a small dummy paratrooper.” The two brothers designed, tested, and produced a dummy they named “Rupert.”

Freedman retained an interest in the project and later developed an inflatable version of the decoy. In 1942, he introduced his concept to an associate of the United States government. He called his experimental model “White Knight.” Freedman was contracted in September 1943 to produce 5,000 dummy paratroopers for a secret U.S. Navy project. Completed in March 1944, his product was shipped off to England. White Knight evolved into what is now known as the Navy PD (Paratroop Decoy) Pack.

The August 1944 invasion of Southern France, Operation Dragoon, saw the combat introduction of the Navy PD Pack. The complete unit included a rubber dummy, inflation equipment, and a demolition outfit. When thrown from the transport aircraft, the unit inflated and activated a delay fuse. Dropping at 15 to 20 feet per second from about 700 feet, the pack produced simulated automatic-rifle fire and then self-destructed some three minutes after hitting the ground.

The August 1944, employment of the Navy PD Pack was combined with the use of “Window,” a tinfoil radar-interference method, to support Seventh Army’s amphibious landings. German commanders sent reserves to the drop zone, where considerable confusion prevailed. After-action reports summarized the effectiveness of the Allied deception effort.

The operation was prefaced by a successful airborne diversion designed to serve two purposes in the cover plan. First, it was to create the illusion of a southern airborne corridor; second, it was to simulate a false airborne drop zone by dropping rubber parachute dummies in several areas. The six aircraft used on the mission dropped Window en route to give the effect of a mass flight, and at 0205 on D-Day they dropped 600 dummies as planned on false drop zones north and west of Toulon. German radio reports indicated the complete success of the simple ruse. The rifle simulators and other battle noise effects used in the diversion functioned well and added to the overall realism of the feint. Afterward, Axis Sally, a German radio propagandist, referred to the decoys as the “product of a fiendish Anglo-Saxon mind.”

Dummy paratroopers were also used as a deception tactic in the Pacific Theater. The assault against Hollandia, New Guinea, on April 22, 1944, included efforts to convince the Japanese command of an attack against another location in the area. Dummy parachutists were dropped in the area prior to the operation against Hollandia. Decoy drops were also included in operational plans for the invasion of the Philippines in October 1944. Further plans included using decoys during the 511th Parachute Infantry Regiment’s landing in February 1945; the Navy PD Pack was also used in that operation.

Various deficiencies had been encountered with Rupert, the British cloth dummy, and the Navy PD Pack. ERDL’s attempts to overcome these problems produced a series of trials and models of new paratrooper dummies.

ERDL first focused on a wind sock-type simulator and a plastic-film figure, as it believed these models could decrease the cost of the Oscar unit. An inexpensive pasteboard container for storing and deploying the units was also planned. The dummy’s fabrication and means of self-destruction were primary considerations in its development. The wind-sock figure used the principle of inflation, as did the Navy PD Pack. It was designed to eliminate the PD Pack’s rubber fabric and the required inflation equipment. Inflation was achieved by the passage of air through the figure while it descended. The four-foot high decoy came with a 12-foot diameter parachute. The first model had parachutes made from salvaged Army sheets. A series of tests was conducted, and various modifications were made to try to achieve complete destruction and obtain realistic appearance in operation. The results proved unsatisfactory, as complete inflation could not be achieved. These poor results led to the abandonment of the wind-sock principle and its replacement with the plastic-film model.

The ERDL team developed several test models. The new Oscar had a solid head and feet appropriately weighted to hold the body in the proper position. The body was expanded by a series of plastic rings in the legs, trunk, and arms. It included a lightweight camouflage suit with hands added to lengthen the arms. The decoy was found to have “a natural appearance in descent.” The success of the design resulted in the construction of several plastic Oscars. A 0.04-inch thick vinyl sheet and a 1/8-inch cellulose-nitrate sheet were used in fabricating the figures. The bodies were weighted by iron grits in the head, hands, chest, and feet.

A significant shortcoming was the inability to find a flammable material that would allow destruction of the dummy without the use of explosives. Two models of the plastic-film figure were developed for testing: a three-foot figure and a four-foot figure. Several deficiencies were identified through testing: Vinyl proved to be an unsatisfactory material, susceptible to temperature variations. It became rigid at low temperatures, and at higher temperatures it stretched and was susceptible to damage in handling. Adding to these difficulties was the lack of parachutes able to handle the lighter-than-normal load. The need to have rigid heads and weighted feet, combined with the other difficulties, resulted in abandoning efforts to create a “light-weight completely collapsible figure.”

The next stage of development produced a body made from cloth, plastic, steel, and plaster of Paris. Three sizes were developed to determine whether small-scale or full-sized models worked best. These included a three-foot, 35-pound decoy with a 12-foot parachute; a four-foot, 75-pound decoy with an 18-foot parachute; and a five-foot-10-inch, 125-pound model with a 28-foot parachute. All the models used flexible cellulose-acetate rings in the trunk, legs, and arms to maintain fullness. Steel grit was carried in a chest pack to provide weight for stability and control. The plaster of Paris head and feet were molded hollow with burlap used as a reinforcement medium.

As testing continued, the body shape of the dummies improved until the likeness to an actual paratrooper emerged. Combined engineering tests occurred in March 1946 at Fort Bragg, North Carolina. Comparisons of the three-foot, four-foot, and six-foot models were conducted. Tests were made with single units and in mass drops. Observations were taken at close range and at distances of up to one mile to determine whether the decoys were effective and realistic. The conclusion was that the four-foot dummy presented a “satisfactory simulation” under controlled conditions.

The resulting model was 15 pounds lighter than the initial test version. Its major components included the dummy, self-destructive mechanism, parachute, pack, and pack carrier. Service tests were conducted at Fort Bragg from the fall of 1950 through the spring of 1951. Testing included single and mass drops at altitudes varying from 500 to 1,500 feet and air speeds ranging from 70 to 160 mph.

The paratrooper decoy was judged an “excellent airborne diversionary simulator.” A realistic appearance in descent was achieved, deceiving actual paratroopers. It was touted as the “central item of equipment around which an airborne diversionary operation would evolve.” When the final report of ERDL was issued in October 1955, Oscar became a regular member of the United States Army’s airborne forces.

The use of decoys was a recommended practice found in field manuals until 1977. Unofficial references citing limited use in Korea and Vietnam do appear. Oscar stayed in the Army arsenal for nearly 33 years, being dropped from the Army stock number listing in July 1977.

The dummies presented significant advantages for assaulting forces while creating serious problems for defenders, causing considerable confusion on the battlefields of Europe and the Pacific. The concept contributed to the success of the Allies’ airborne operations during World War II. Oscar earned his stripes and deserves to be considered one of the most successful deception devices of the entire war.