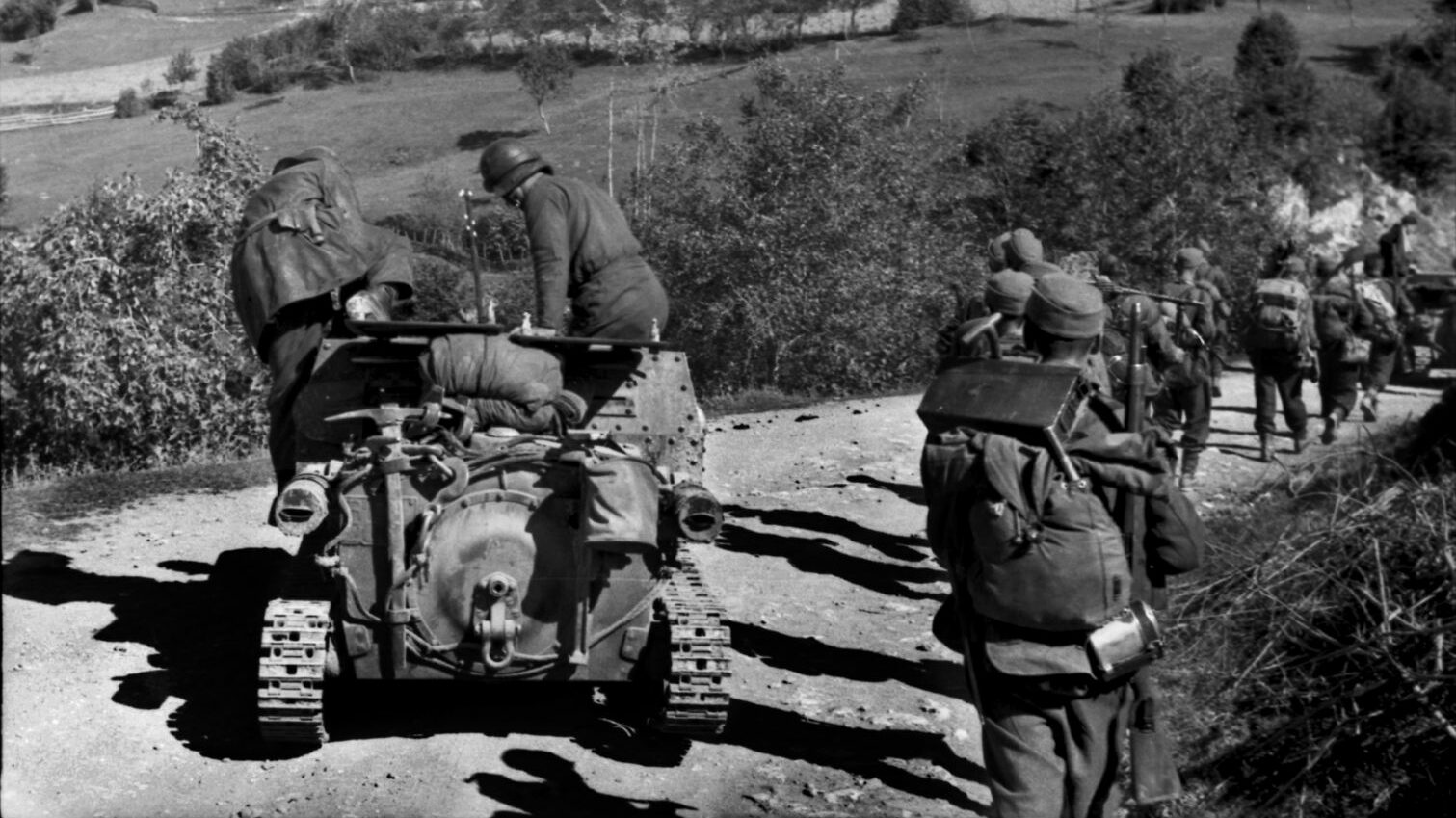 Photo Credit: Accompanied by an Italian military vehicle, German mountain troops advance along a dirt road in Albania in 1943.

The American OSS conducted operations in the Balkan nation of Albania during World War II.

On the morning of April 7, 1939, Albania, the smallest of the Balkan countries, was invaded by Benito Mussolini’s Italian Fascist Army. This conquered land would become a staging area for military operations against Greece and Yugoslavia.

The Fascist invasion ignited active resistance movements, as in other occupied countries. German and Italian troops clustered in towns and villages along the Adriatic Sea and the Straits of Otranto. They avoided the rugged mountains that were controlled by Albanian guerrillas. But civil war broke out, and conflicts erupted between partisan forces holding different political philosophies that generally were polarized along either communist or royalist-nationalist positions. By 1943, Enver Hoxha’s Communist National Liberation Front was in control of the Albanian resistance movement. The communists represented the only viable guerrillas that were fighting the fascists. The British Special Operations Executive (SOE) and the OSS had no choice but to support Hoxha’s forces. The United States decided not to deploy OSS Special Operations teams to Albania in order to avoid being pulled into the fighting between guerrilla rivals and communist elements. However, five OSS Secret Intelligence units were inserted into Albania.

The first OSS team, designated the Tank Mission, was inserted by boat on the night of December 31, 1943. Gunnery Sergeant Nick “Cooky” Kukich of the U.S. Marine Corps was a member of the three-man unit that landed on an isolated section of the Albanian coast from a fishing boat that had been launched from Bari, Italy. Sergeant Kukich served as the team’s radio operator.

The Tank Mission was tasked with contacting Albanian guerrillas and establishing an intelligence network. The OSS and the British SOE members who were already present in Albania had been charged with conducting operations that would keep German and Italian forces busy to prevent their deployment to the fighting in Italy.

The British, however, wanted the Americans to submit to their command. The proposal was flatly rejected. One of the SOE operatives was British actor Anthony Quayle. Ironically, 18 years later, Quayle would play the part of a British commando officer in the movie The Guns of Navarone, a screenplay very similar to his real-life special operations adventures during World War II.

Facing the same political conflicts between communists and nationalists in Albania that OSS agents experienced in China, Yugoslavia, France, and Greece, the Tank Mission made contact with the Communist National Liberation Front (FNC). Gunnery Sergeant Kukich and his two comrades established an outpost in a large cave on the Adriatic coast. The OSS Marine immediately began radio transmissions to Cairo, Egypt, and Bari, Italy. By January 1944, Kukich and his OSS team had created an active spy network in Albania and were transmitting a steady flow of messages to OSS communications centers on enemy military activity and the profile of guerrilla forces. Kukich and the Tank Mission’s secret intelligence operation were so effective that the Germans launched a major offensive to find and destroy both the OSS and SOE teams. Enemy pressure and the illness of several Tank team members forced their evacuation by sea in February 1944. Kukich, however, remained behind.

After the withdrawal of the Americans, Kukich operated with the British SOE from their primitive coastal camp. During this time he was the sole communication link for both American and British radio transmissions to OSS Headquarters in Bari. He and other Allied special operations warriors were constantly on the run from aggressive German patrols. Many critical insertions and evacuations were conducted because of his daring and persistence in maintaining radio communication with Allied command centers in Italy. Several sea evacuations for British battle casualities were successfully coordinated by the lone OSS agent. His transmissions were frequently interrupted by the threat of discovery from nearby enemy patrols, but the OSS listening post personnel were confident that he would soon be back on the air. As an OSS secret intelligence agent, he was able to continue the development and maintenance of an active Albanian espionage system that provided highgrade intelligence to Allied war planners.

Kukich reported one hairraising incident in which the Albanian underground transmitted an urgent report to the Allied special operations camp that the Germans had located their position and were on their way to eliminate them. Kukich and the British agents swiftly withdrew into the surrounding mountains and peered down from caves and hideouts as the enemy swarmed into their abandoned encampment. The Nazi troops were in the gunsights of the Allied agents, who reluctantly chose not to open fire, fearing that the brutal enemy would retaliate against the civilian population of a nearby town.

Rendezvousing For a Rescue Mission

In February 1944, U.S. Army Major Lloyd Smith was inserted into Albania to conduct a rescue mission of Army nurses. In November 1943, a group of 26 nurses was on a plane that was forced down behind enemy lines in Albania. Fortunately, the nurses were found by Albanian guerrillas in a remote mountainous area and were evacuated by sea in January 1944 to Italy after an arduous monthlong hike to the coast.

Tragically, three of the nurses had been separated from the main party and were left behind. Smith returned to Albania in February 1944 to rescue the remaining nurses. This time he recruited Sergeant Kukich to help in the mission. Albanian guerrillas promised to bring the nurses to an Allied special operations camp in about 10 days.

As the date of the rendezvous approached, Smith and Kukich feared that the Germans had located their position and would attack at any time. Smith states, “The situation was critical at this time because we were expecting the Germans any day and I did not care to risk leaving the base, pick up the nurses and return to find it in German hands.”

On February 25, Smith enlisted Kukich’s help. He reported, “We agreed that when we received word that the Germans were coming, we would leave together with a radio. In this way we would still have communication to arrange for bringing a ship to some safe place along the southern coast for evacuation.”  On that same morning the two men fled the camp to a hiding place in the mountains.

Major Smith continued, “On the 26th, Sergeant Cooky [Kukich] and I traveled up a mountain to the snowline. He carried his radio and I carried both of our packs. We waited in a gully at the snowline until dusk and then started toward the top. After traveling for four hours in the deep snow and walking against a wind that was knocking us off our feet every few yards, we decided to come back down the mountain a few hundred yards and find shelter. At this time we came into a hard rain. That night we bundled together under a rock ledge with our blankets. The next morning I felt that I had not slept at all; however, Sergeant Kukich insisted that I was both snoring and shivering, not just shivering. The next morning, 27 February, we spotted six Germans, at almost the same time we were spotted by them. We tricked them into believing that we were going down the mountain and then continued on our way over the top. Sergeant Kukich and I between us had two K-Rations, which we made last for three days.”

Several weeks passed without hearing from the guerrillas as to the location of the Allied nurses. On March 14, 1944, Major Smith received a message from Cairo telling him, “If the nurses can be successfully evacuated in the next thirty days, continue; if not, return to Bari, Italy.”

The tension level rose among the rescue team members now that a timetable had been set. Fortunately, on March 19 contact was made with the guerrillas, and the nurses were turned over to Major Smith. After an arduous two-day hike to the coast, the party was picked up by a swift motor torpedo boat for a two-hour run to the safety of Otranto, Italy.

Intense enemy pressure forced Sergeant Kukich to break off his intelligence-gathering and special operations activities and reluctantly accept a sea extraction back to Italy in March 1944. Kukich was promoted to second lieutenant and returned to the Albanian mountains in July.

On this mission he was attached to the headquarters of Enver Hoxha, the leader of the communist partisans. This group was viewed by the OSS as the most effective guerrilla force operating in Albania and deserving of American support regardless of its politics. Kukich was able to establish a tenuous relationship with the ruthless, narcissistic communist leader. He was given command of a guerrilla unit and moved into northern Albania to conduct operations with the 1st Division of the Albanian National Liberation Army against the Germans.

In September 1944, Lieutenant Kukich’s troops were ordered to join General Mehmet Shehus’s main partisan force for an all-out attack on the Albanian capital city of Tirana. The general was a seasoned soldier and veteran of combat against the fascists in Spain during the bloody civil war of the 1930s.

The Germans dug in for a fight inside the medieval walled city filled with Islamic architecture in the form of mosques and minarets. After a fierce battle, the city fell to the Albanian communist guerrillas in November 1944. The German troops either withdrew or surrendered but left behind devastation. The savage house-to-house fighting left the city filled with the decaying bodies of both partisans and Germans. Kukich and his OSS team began immediate radio transmissions to the OSS station in Bari.

Kukich continued to relay strategic intelligence on conditions in Albania and served as the liaison for the U.S. military and the State Department. His reports contained crucial information on the political and economic situation and on the outbreak of a deadly typhus epidemic. Valuable intelligence reports were also filed on the establishment of the communist regime under Hoxha, the new dictator who would rule Albania for the next 40 years.

State Department Foreign Service officers arrived in Albania during the summer of 1945 and worked to confront the emergence of militant Cold War communism that had replaced ruthless fascism. Lieutenant Kukich was one of the last U.S. military personnel to leave Albania in September 1945. Before his departure, he was awarded the Partisan Star decoration from the communist government for his courage in fighting for their liberation from the Nazis. He also received the Bronze Star for valor from the United States Marine Corps for his gallant service as an OSS agent.