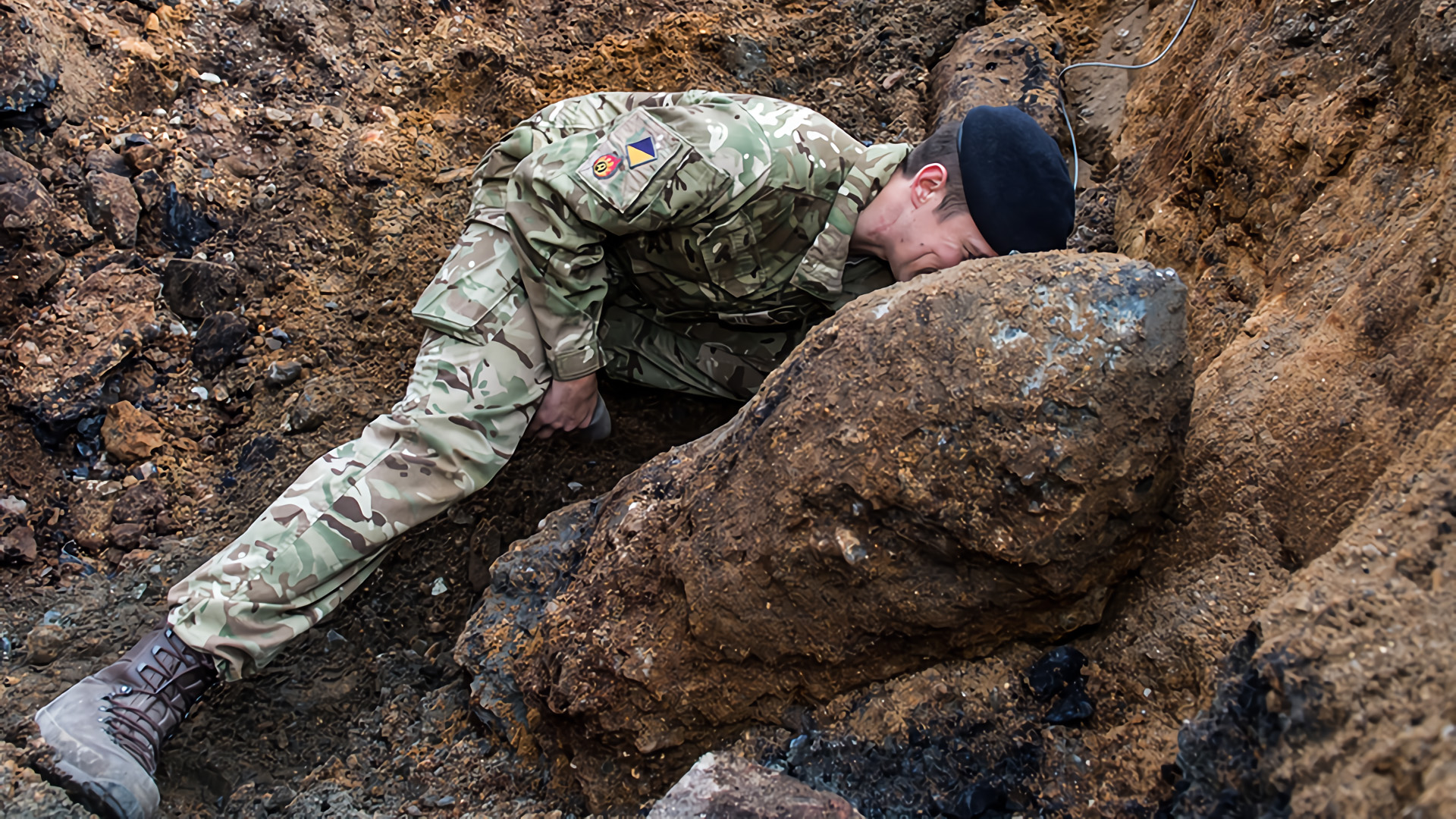 For the most part, World War II left the U.S. and Canadian homelands physically untouched. There were a few incidents of sabotage and a few small-scale attacks, such as a Japanese submarine’s shelling of an oil refinery in southern California and balloon bombs launched from Japan that floated over the Pacific and set fires in the western United States and Canada.

But there was nothing to equal the millions of tons of bombs dropped on Britain, Europe, and Japan.

During the war, the United States and its allies dropped 2.7 million tons of bombs on European targets. Some bombs were armed with a delayed fuse so that they would explode hours or even days after they were dropped.

“It was a terror tactic,” one news source said, “designed to hinder the cities’ recovery. Half ended up in Germany, and what’s left today buried in German soil makes up the roughly 10 percent of bombs that never went off.”

This fact came to light with a recent news item from northern Germany that said the A-2 autobahn near Hannover had to be shut down while explosive ordnance disposal (EOD) crews blew up two bombs dropped more than 70 years ago and were discovered during a construction project.

As a major target for U.S. and RAF bombers, Hannover was hit hard; on one raid alone, more than a quarter-million bombs were dropped on the city.

Almost every year similar reports come out. This past July, a Berlin neighborhood had to be evacuated when a 500-pound American bomb was unearthed by construction workers.

In Wolfsburg, a city about 150 miles west of Berlin, a 550-pound bomb was found beneath the Volkswagen factory in July 2016. In 2011, a two-ton bomb was discovered in a riverbank in Koblenz; 45,000 people were temporarily evacuated. A year later, a 550-pound bomb was detonated in Munich after an EOD unit was unable to defuse it; windows for blocks around were blown out. It’s estimated that another 2,500 bombs are still buried around Munich.

A news source says that every year at least one or two leftover bombs in Germany explode without warning. And farmers sometimes die when their plows strike buried bombs or artillery shells.

So commonplace are the incidents, in fact, that Germans are rarely surprised by the news. In fact, the KMBD (Kampfmittelbeseitigungsdienst, or War Ordnance Disposal Service, a division of the Brandenburg state government) estimates that more than 2,000 tons of unexploded bombs are uncovered each year.

Britain, too, has its own unexploded bomb problem. In the city of Bath, a 500-pound German bomb was found under a school playground this past May.

No one knows exactly how many bombs are still out there or where they may be lurking, and that’s the problem. Any place that, during the war, was home to an armaments factory, transit hub, depot, or airport is likely to still be sitting on these rusting time bombs.

The deadly legacy of World War II goes on and on.