The Death of Benito Mussolini

Fascist dictator Benito Mussolini and his mistress, Clara Petacci, were executed by Communist partisans as World War II in Italy came to an end.

During the last days of World War II in Italy, former Fascist dictator Benito Mussolini was a hunted man. With Allied troops drawing ever closer, Mussolini and his mistress Clara Petacci left the city of Milan on April 25, 1945. Their destination was the town of Como, where it was anticipated that they would meet a force of 3,000 loyal Fascist soldiers intent on continuing the fight. Their Duce would lead these men into the mountains and resist until the bitter end from their alpine redoubt. It was a bitter disappointment when only 12 soldiers rallied to the beleaguered Mussolini.
[text_ad]

Hastily, the small group joined a German convoy headed northward. Aware of the need to conceal his identity, Mussolini dressed in an ill-fitting German overcoat and a helmet to partially cover his face. As the convoy neared the town of Dongo the following day, it was stopped by armed patrol of Communist partisans under the command of Count Pierluigi Bellini Delle Stelle. Mussolini’s disguise appeared to be working – until one of the partisans noticed that the leather boots this soldier wore were of exceptionally high quality. 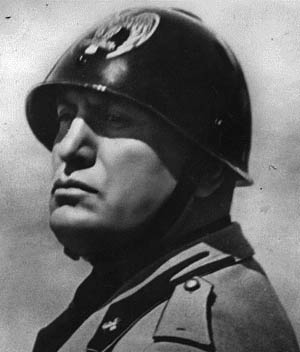 His last bid for safety undone, Mussolini was taken into custody along with Petacci, and the prisoners were held under guard for two days as the Communist leaders of the Committee for National Liberation deliberated over what to do with their sworn enemy. At last, on April 28, the guards herded Mussolini, and Petacci into a waiting truck. The driver, a partisan named Walter Audisio, headed toward a villa some distance away. When they arrived, Audisio instructed the prisoners to stand beside a low stone wall.

Reports of the incident state that Audisio pointed both his own pistol and a submachine gun at Petacci and both failed to fire. He then took another weapon from a partisan named Moretti and killed Mussolini’s mistress. Some witnesses recalled that Mussolini was a coward and begged for his life saying, “I will give you an empire!” Others remembered that he dramatically tore open his shirt and coat to the executioner and bellowed, “Shoot me in the chest!” A rapid report from the gun dispatched the former dictator, who crumbled to the ground in a heap.

The two bodies were thrown on a truck and taken to the Piazzale Loreto in Milan, where they were dumped onto the street and then strung up by their heels in front of a garage. Other known Fascists were executed nearby, and a crowd gathered. The corpses were beaten and abused almost beyond recognition. One woman emptied a revolver into Mussolini’s lifeless body and screamed, “Five shots for my five murdered sons!”

Mussolini’s remains were buried nearby in an unmarked grave until loyal Fascists exhumed the body a year later and hid it in a convent. In 1957, it was interred in the family crypt in the cemetery of San Cassiano in the town of Predappio, Italy.

Far from forgotten, Mussolini’s final resting place is visited by nearly 100,000 people annually. Some of them, no doubt, are Fascist pilgrims. Others are simply those who come to ponder a legacy of death and destruction.