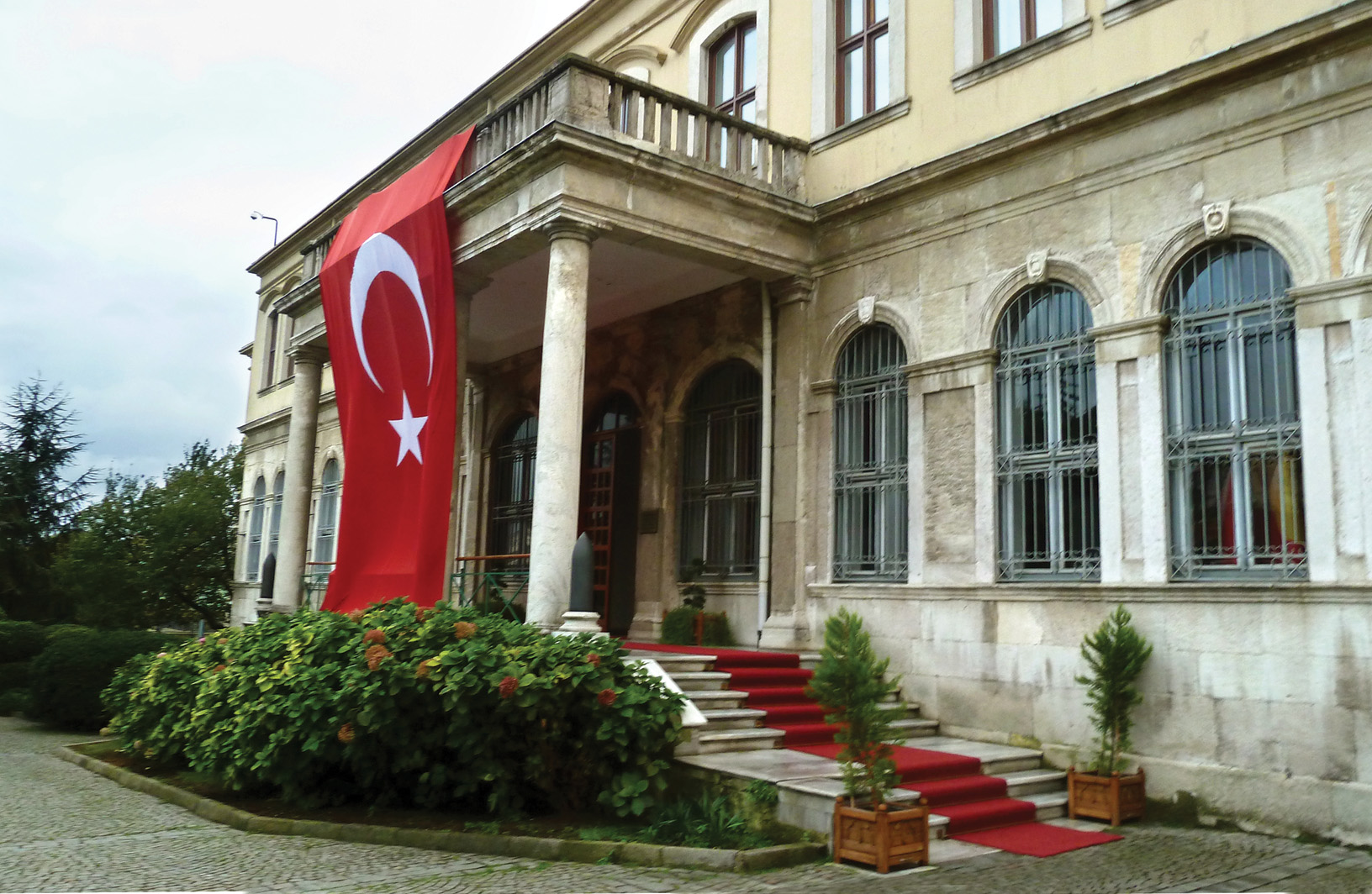 Two military museums in Istanbul house artifacts that bear witness to more than a thousand years of Turkish naval and land campaigns.

This article appears in: September 2013

Modern-day Turkey is truly a land of east meets west, and within the cosmopolitan city are two of the country’s finest military museums, the Istanbul Naval Museum (Istanbul Deniz Müzesi), which was established in 1897 and includes notable artifacts pertaining to the Ottoman Navy, and the Istanbul Military Museum (Askerî Müze), which is dedicated to more than a thousand years of Turkish military history. Located less than a mile apart, these twin museums should be on a must-see list for military history buffs.

Istanbul has many layers of history, much like Russian nesting dolls, with one former city buried beneath another. Founded by the Greeks in the 3rd century bc, the city was chosen as the site for the new Imperial Roman capital by Constantine the Great nearly 600 years later and for more than a thousand years remained the light in the East as Western Europe was plunged into the Dark Ages.

Istanbul is also home to the two excellent military museums, and each offers impressive collections that showcase the Ottoman Empire’s rise to power and subsequent slow decline.

Located on the shores of the Bosporus in the Besiktas district, the Deniz Müzesi is today the most eminent naval museum of Turkey.

This fascinating history of the rise and fall of the Ottoman Navy is chronicled in the Deniz Müzesi. Within the museum’s collection visitors can understand how the once nomadic tribesman from Central Asia eventually learned the craft of seamanship and became the pre-eminent naval power in the eastern Mediterranean. It is the largest museum in its field anywhere in Turkey, with around 20,000 pieces in its collection.

Within the collections are numerous artifacts that can help visitors understand the Ottomans rise to being a sea power along with personal items from Mustafa Kemal Atatürk, founder of the modern Turkish Republic. Among the other pieces in the collection are paintings, ship models, weapons, maps, ship riggings, and numerous uniforms.

One of the most impressive single pieces is an original piece of the chain that the Byzantines stretched across the mouth of the Golden Horn in an effort to keep the Sultan Mehmed II’s navy at bay during the 1453 siege of the city.

The museum is also home to 14 of the world’s surviving 42 imperial caiques, the small personal yachts used by kings and sultans around the world. These craft, which date from the 19th century, were used by the Ottoman sultans for cruising in the Bosporus, and three of these were used by Atatürk at the Florya Pavillion. The largest of these is the 32-meterlong imperial caique with kiosk from the reign of Sultan Abdülmecit. The exterior edging is embellished with motifs in relief inlaid with gold leaf and hand-drawn acanthus leaves.

On a much smaller scale, the museum is home to more than 300 full- and half-hull models that chronicle more than 500 years of Turkish naval tradition, including three-deckers, cogs, frigates, schooners, armored, and even modern warships.

The museum’s collection also features some 2,000 weapons from the 15th to 20th centuries and includes cannons, swords, bows, and countless long guns. Among the centerpieces of the collection are the displays of Ottoman uniforms that show the evolution in design and accoutrements along with various medals and awards—something countless Turkish sailors earned in the Navy’s long history.

Dedicated to more than a thousand years of Turkish military history, the Askerî Müze is truly one of the leading museums of its kind anywhere in the world. As with Deniz Müzesi, the Askerî Müze museum was originally much smaller and located in a different building than it is today.

In fact, the original Askerî Müze was located in the Hagia Irene, the church that served the Ecumenical Patriarchate of Constantinople before the original Hagia Sophia was completed in ad 360. Following the conquest of Constantinople in ad 1453 by Mehmed II, the church was enclosed within the walls of the Topkapi Palace and was used as an armory by the Janissaries, as well as a warehouse for war booty.

The Hagia Irene remained a military museum from 1908 until 1978, when it was turned over to the Turkish Ministry of Culture. Today that building serves mainly as a concert hall for classical music performances.

For a period there were actually two military museums. The military history museum was reorganized in 1957 by General Ahmet Hulki Saral. It was moved to the First Army Headquarters building, which was the site of the Ottoman military academy—the empire’s version of West Point or Sandhurst.

The museum and cultural center were most recently renovated in 1993, and today there are 22 rooms with more than 9,000 pieces from the Ottoman era through the modern day. Outside the actual building are several Ottoman cannons and mortars, a rail gun of the type that helped defend Istanbul from seaborne invasion, and a Soviet-made T-26B light tank, which was used by the Turks in the 1930s.

Within the building itself the collection includes notable treasures such as early bows and arrows from the Seljuk Turk era to the conquest of Constantinople and, of course, the expansion of the empire. As the collection now includes pieces from Sultan Ahmet III, there is an outstanding assortment of European arms and armor.

An entire room is devoted to cannons and includes pieces from the late Middle Ages through the early 20th century and cannons used by the Ottomans as well as several pieces captured during various wars as the empire expanded and later retracted.

The museum’s artifacts also include a variety of pieces from the 19th century and the years leading up to World War I, a time that saw the Ottoman Empire lose much of its European territory. The second floor is largely devoted to World War I with a major emphasis on the Gallipoli Campaign, which is to be expected as it was the one shining moment for the Turks in the war that saw the end of the 500-year-old Ottoman Empire. Among key pieces in the World War I collection are British and Australian items, including flags captured by the Turks. Other items include an impressive assortment of small arms, swords, and uniforms.

The museum also focuses on the transition and tribulations of the Turks with a focus on the Turkish War of Independence and the role the military has played since the establishment of the Turkish Republic. As the nation remained neutral through the greater part of World War II and only entered the war in its closing days, there is actually little from this period.

However, a room is devoted to Turkey’s role in the Korean War, when its military was seen to redeem itself as a serious fighting power. Turkey participated in the Korean War as a member state of the United Nations and suffered more than 700 deaths in combat. This has resulted in close ties between South Korea and Turkey, and this is reinforced in the pieces on display at the Askerî Müze.

The Askerî Müze offers much for visitors and even includes some live entertainment for those who arrive in the late afternoon. The Janissary Band Mehter Takimi, which remains one of the world’s oldest military bands, gives concerts in traditional uniforms. This is notable as the Ottomans were the first to use musicians in military campaigns and the first to integrate music into the life and work of the army. The band features oboes, clash cymbals, and kettle drums—the latter two Turkish inventions—and plays the music that was meant to glorify the conquest of captured cities. In this way it was to serve as a message to the subjugated populace that it was now part of an entirely different civilization.

Just as the band’s music serves as a regular reminder of the glory that once was the Ottoman Empire, so too do these two fine military museums in their collections and displays. While Turkey’s time in the sun may have faded, both Deniz Müzesi and Askerî Müze serve as reminders of history, and more importantly, of what could have been.