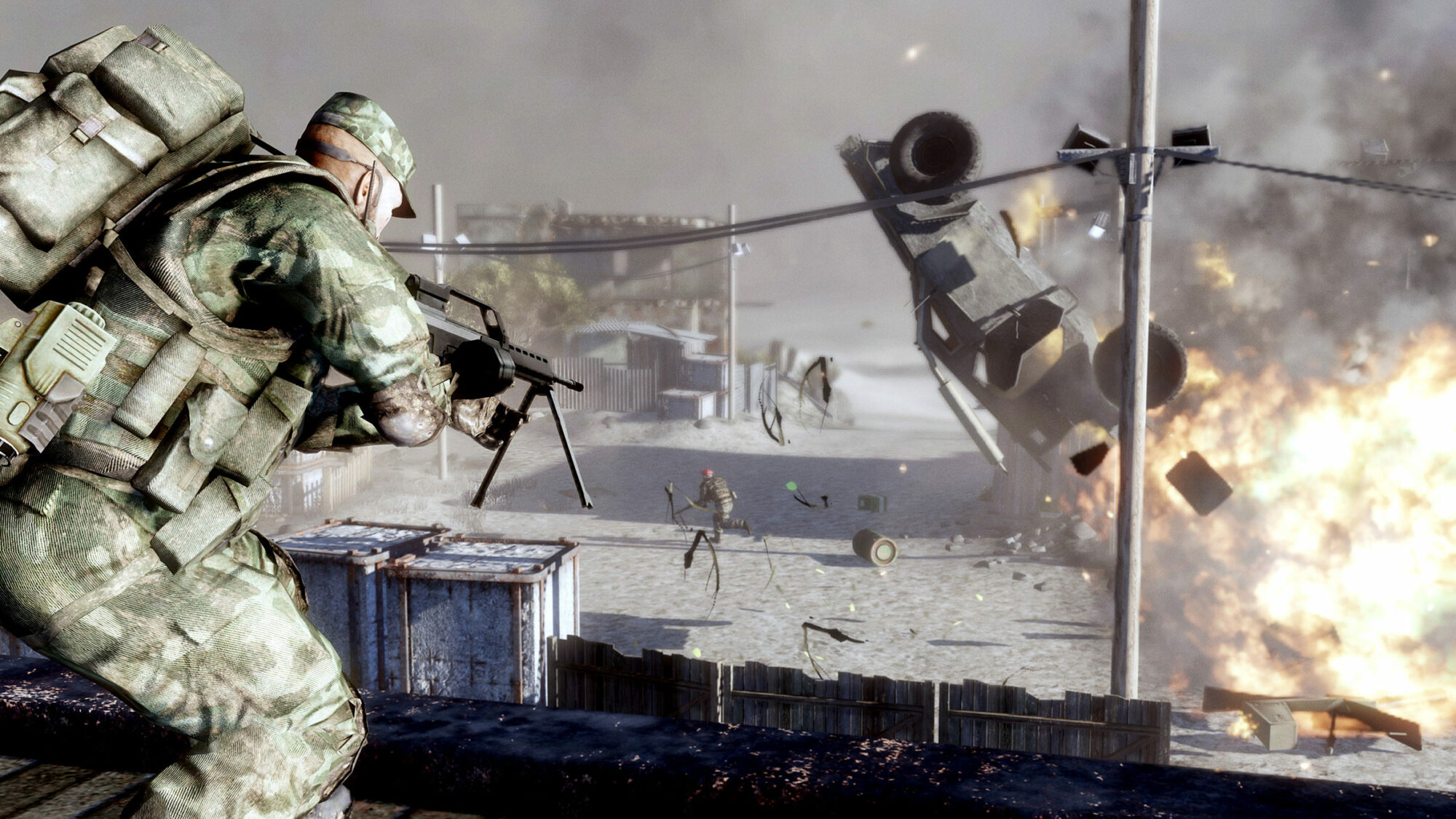 There’s currently a blazing hot war taking place within the very feed of our television advertising spectrum. If you haven’t noticed or, better yet, aren’t one to waste as much time as me watching TV, this is a head-to-head battle between two larger-than-life war game franchises. The belt may belong to Activision and their long-reigning Call of Duty series—pretty much everyone in the world officially plays Modern Warfare 2 in some capacity—but let’s not discount EA’s powerful contender in Battlefield: Bad Company 2. Though they both skirt very similar territory, Bad Company 2 has some tricks up its sleeve that makes it unique, and ultimately worthy of addition to any shooter fan’s collection.

The original Bad Company, released on multiple platforms in 2008, established it as the more destructive side to the franchise, with environments mostly collapsable, adding a new element to taking out enemies along with your squad of crackshots. The real difference between this and the series proper, however, was the inclusion of a story mode to the single-player content. Rather than fighting bots on your own across the same maps as multiplayer mode (a la Battlefield 2), Bad Company was more akin to Call of Duty’s solo outings, with a great deal of emphasis placed on explosive scenarios and feverish shootouts.

The plot in this sequel has you in the shoes of Private Preston Marlowe, a member of a squad known as “Bad Company.” This collection of soldiers is as appropriately ragtag as one would expect, including but not limited to the requisite gung-ho yee-haw muttonchop militant. The order of the day is the retrieval of a top secret weapon known as Aurora, and doing so takes Marlowe from steamy jungles to snow-stacked mountains so cold that staying in the open winds for too long will quickly introduce you to the Game Over screen.

Things even kick off with a World War II flashback mission, so there’s no lack of variety in setting. Just don’t ask anyone to go into more detail than the above when it comes to the story, because it’s as throwaway as almost every other quasi-fictional modern military game out there. At any given moment I wasn’t sure if I even cared which nondescript Russian villain I was chasing, or what was at stake should he get the opportunity to trigger the cataclysmic device in question. I can’t blame EA for going with safe villains once again, but plots like this are easy to confuse with the story of pretty much every other game out there, including Call of Duty. 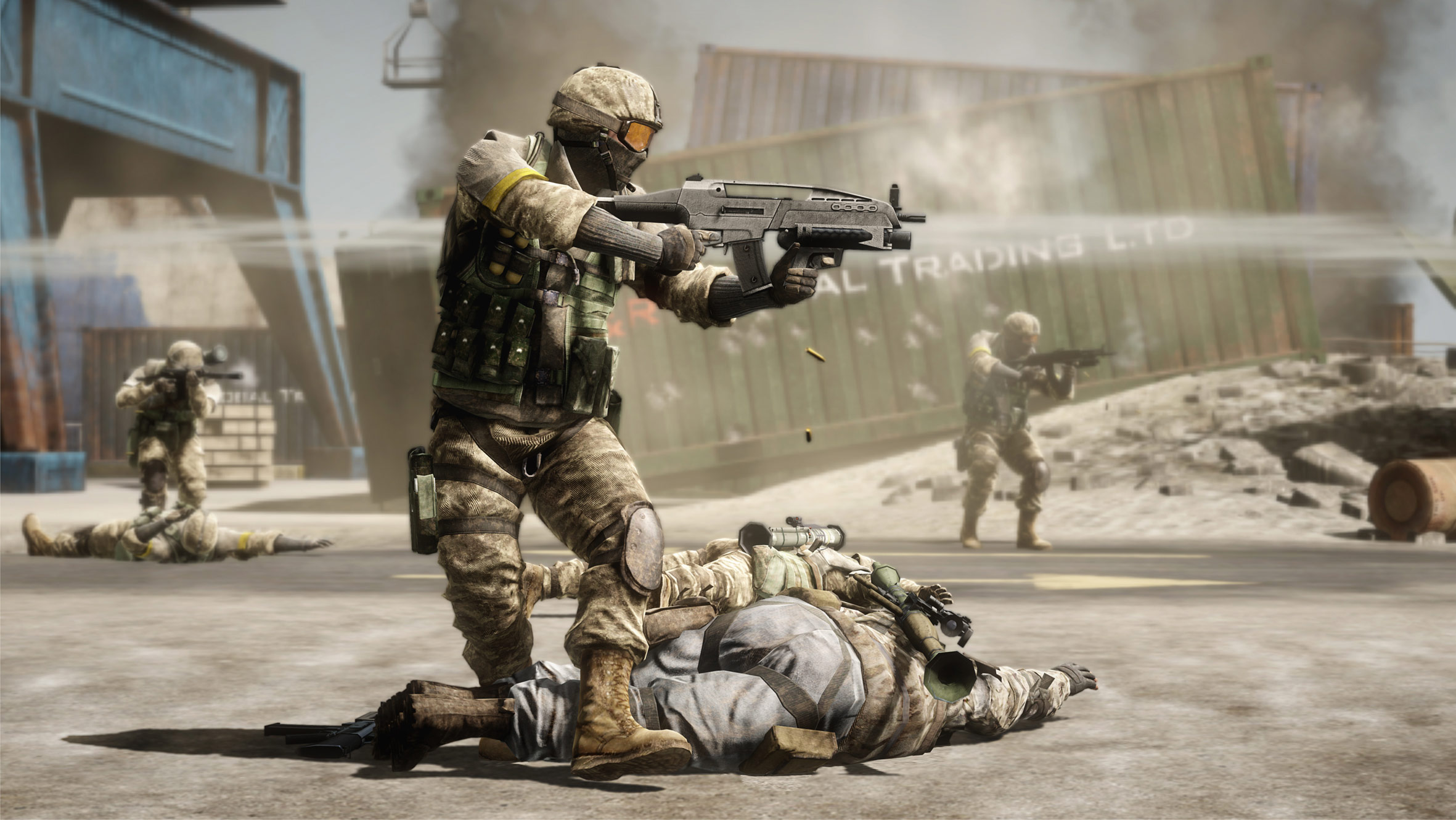 What does make it special is the utter destructibility of everything on screen. This potential was toyed with in the first Bad Company, but it’s taken a step further here, with satisfying results. It may seem kind of silly to hinge so much joy on being able to “blow stuff up good,” but it really does make a difference in the heat of battle. In fact, I ultimately enjoyed the campaign more than that of Modern Warfare 2, and that’s saying a lot. Strategies completely change once you’re able to take out a group of enemies, not only by blasting rocket-propelled grenades through the walls of whatever structure they’re currently holed in, but bringing down the roof itself on top of them, reducing huts and houses to rubble.

This works both for and against you, again making combat especially interesting. One jungle mission had me and one other squad member huddled in a hut, sniping enemy soldiers as they approached through the field beyond. Eventually the stakes were raised with the rumble-rumble of an approaching tank. Cover became scarce in no time as its relentless blasts made swiss cheese out of our hiding spot, adding a nice level of urgency to what might otherwise be a scenario full of idle ducking and waiting. In another stage much closer to the finale, my intended escape by helicopter was cut short when a building full-on collapsed on me. Frustrating? Maybe, but definitely an intense way to go.

There are a few annoyances, and checkpoints tend to be spread fairly far apart, forcing the occasional retry near the tail end of a lengthy firefight—at least there aren’t sections of infinitely spawning enemies (ahem). As enjoyable as the single-player campaign is, were it the sole notable feature then Bad Company 2 would easily be relegated to rental-only status. The blowing up of things and the complete collapsing of buildings is a gas, but without anyone to “ooh” alongside your many “aahs,” there’s only the predictable story and varying levels of difficulty to fall back on.

This is, naturally, where the multiplayer comes in. To put things simply, one could consider this the big brother to last year’s downloadable snack pack, Battlefield 1943. Like that and others in the series, Bad Company 2 puts you in one of two opposing squads, loaded with players from all over, ready to duke it out across a handful of modes that range from Capture the Flag-type stuff (Conquest) to a traditional Squad Deathmatch. The hook here is the variety of means by which you and others on both teams can take to both the land and skies. Hop in a tank and mow over the opposition (perhaps finding yourself quickly blown up in the process) or run and gun it, praying for the best as players of all ages try and snipe at you from afar. There’s nothing worse than being mercilessly taunted by a voice many octaves higher than your own.

Like other games of its ilk, multiplayer can at once be both an exercise in frustration and a rousing, fist-pumping tale of glory. Death comes frequently to all but the experts, and while respawning does chew up a bit more time than in Modern Warfare 2, it’s rarely discouraging enough to dampen the “just one more match” fires. Multiplayer on this scale is incredibly addictive, and it ensures that not one match is going to be the same as the last. On its own, this would be a fairly satisfying main course, but combined with the rest of the package—including DLC that’s cleverly targeted to pepper the landscape and keep copies of the game away from Gamestop’s used section—Bad Company 2 comes highly recommended; even if it means putting down CoD from time to time. n