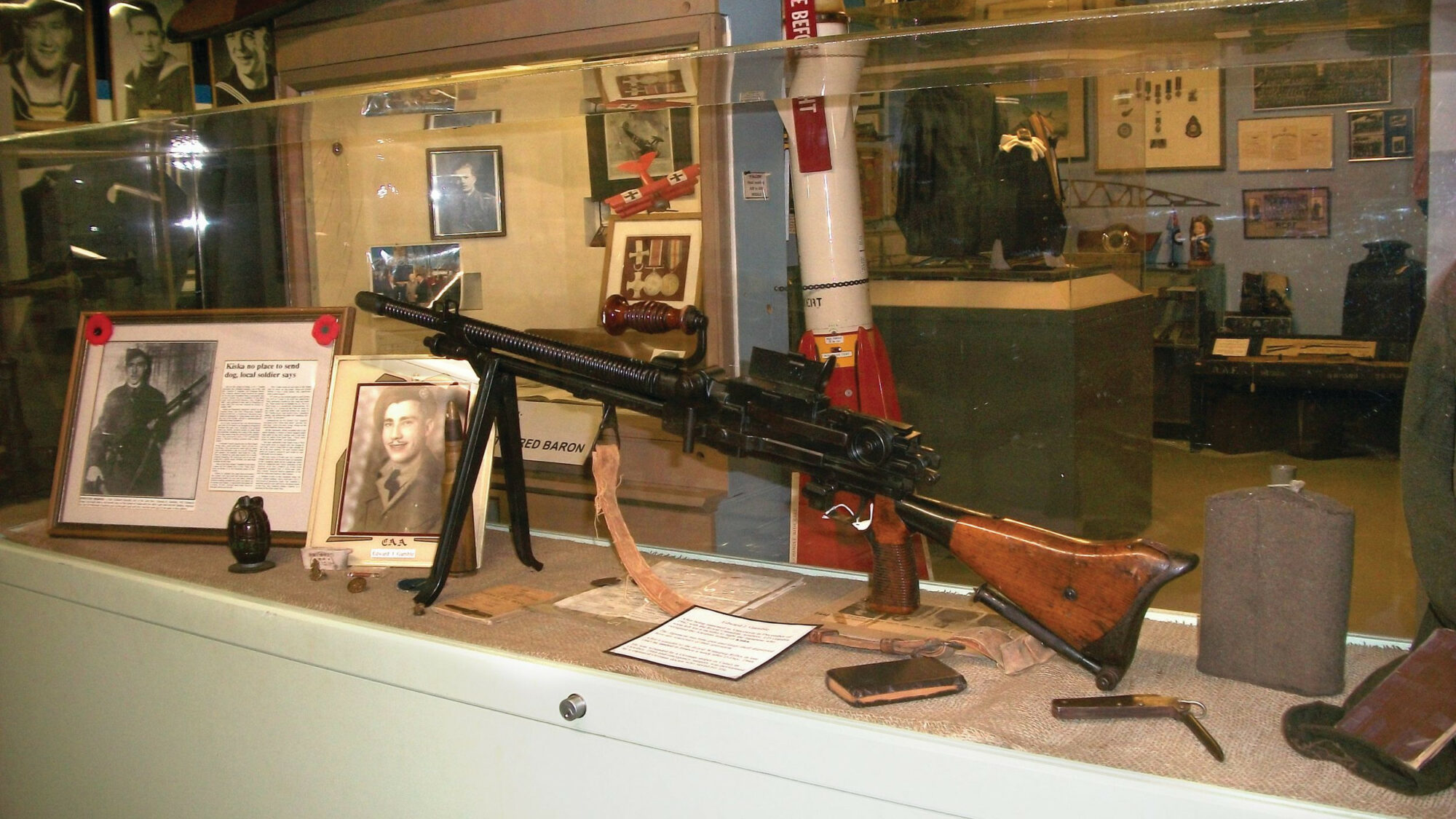 This article appears in: June 2012

The Canadian Military Heritage Museum in Brantford, Ontario, has a four-part mission: to collect, preserve, and display artifacts pertaining to the military history of Canada; to maintain and manage a museum for the purpose of education; to display the artifacts at community events; and to honor the fallen and all veterans who have served and are still serving in the Canadian military. The museum accomplishes all four of its missions admirably.

The CMHM, now in its 17th year, is run by 17 hard-working, dedicated volunteers. The museum’s superb collection is a result of contributions made by people who graciously donated items for display, some from as far away as Europe, out of their desire to have history preserved for future generations. For anyone of any nationality (the visitor guestbook includes entries from as far away as Hong Kong) the CMHM provides a rewarding walk through centuries of Canadian military history.

It is definitely worth the trip to the 13,000-square-foot facility to view Canada’s rich military history unfold through more than 10,000 artifacts, including fully restored military vehicles, full-sized World War I-era warplanes, uniforms, medals, rare photo-graphs and documents, weapons, and a library resource center. It is a veritable walk across centuries of conflict, from a relic owned by a British general in the French and Indian War to items donated by families of soldiers currently serving in Afghanistan.

The extensive number of weapons on display brings a visitor through the technological development of weaponry through the years. Items include a 1795 cutlass from the Queen’s 7th Light Dragoons, a British Brown Bess musket, a cannonball from the Battle of Queenston Heights in 1812, and an American sword from the same war. Other exhibits include an 1840 German Potsdam smoothbore used in the American Civil War and an 1858 Tower Enfield. Other rifles of the period include an 1865 Snyder .577-caliber, an 1885 Martin Enfield, and an 1888 German GEW Model 71/84.

In the central portion of the building is a display of handguns, including an ivory-inlaid flintlock pistol and a Meyers Brevette .32-caliber World War I French officer’s sidearm, along with a Japanese light machine gun captured in the Aleutian Islands during World War II. An illuminated rifle rack under glass next to the library resource center holds more than two dozen weapons alone. The museum’s collection includes not only small arms but also light and heavy artillery, mortars, antitank weapons, projectiles, and ammunition.

From the American Revolution to the World Wars

The first historical section covers Canada’s history back to the Revolutionary War, the conflict that saw many Loyalist colonials move north to live in British territory. The history of the 19th century is covered in a rich display of artwork, documents, and photographs that capture the essence of this tumultuous time of war between Britain and America, fought largely in Canada, as well as such internal conflicts in Canada as the Upper and Lower Canada Rebellions of 1837, the Red River Rebellion, and the Northwest Rebellion by the Metis under Louis Riel.

Providing an inkling of an average soldier’s life during any era is a top museum priority. Personal effects, uniforms and kit, letters, medals, and personal photographs tell the soldier’s story while dovetailing with the weapons, archival photos, banner headlines, and official documents. An 1800 British shako plate, regimental buttons, and tunics accompany a British soldier’s private possessions, including his Jew’s harp and a blood-letting instrument, to reveal a glimpse of a soldier’s life two centuries ago.

Moving into the 20th century, the next section deals with World War I, the “war to end all wars.” It was in this conflict that Canada grew to manhood as a nation, the Canadian Corps being among the best the Allies had. Rifles and equipment from both sides are included, from the superb British SMLE .303 rifle to the ill-fated Canadian Ross. Captured German equipment gives a glimpse of the other side of the war: a Spandau machine gun, a German trench mortar, a replica Luger, a pickelhaube helmet with its signature eagle on the front, an Iron Cross, entrenching tools, epaulettes, bayonets, and German money. A Phenate Hexamine gas helmet—the first of its kind with an outlet valve—sits alongside a gas alarm to remind visitors of the horrors of chemical warfare for Great War soldiers. The capture of Vimy Ridge in 1917 was Canada’s greatest victory of the conflict, and an original map of Vimy Ridge, made just before the battle, hangs above captured German equipment.

The history of each conflict and time period is richly covered in photographs at the CMHM (only the first section predates photography). Pictures and newspaper headlines put a human face to the Great War and other conflicts and subjects, and provide a revealing glimpse of the story as it was read by the people of the time.

Museum visitors quickly come to appreciate the phenomenal selection of original photographs. One could literally spend an entire day looking at the collection of photos and not see them all. The superb memorabilia is followed by a walk through the replica of a typical Western Front trench, complete with a mannequin soldier in his protective dugout, providing an inkling of the subterranean daily life that characterized that long-ago war.

Next is a section devoted to World War II, with particular attention to the disastrous raid on Dieppe by the Second Canadian Division on August 19, 1942. Just as the victory at Vimy Ridge in 1917 was Canada’s largest battle of World War I, the costly defeat at Dieppe unfortunately was Canada’s World War II equivalent. The ill-fated raid deeply touched this region of Canada, as many of the men who were there came from southern Ontario. The stark photographs reveal the carnage on the stony French beaches. One photograph shows one of the first American soldiers to see action in Europe in WWII lying dead on the beach alongside his Canadian comrades.

A 20mm Spitfire cannon, Bren gun, Hotchkiss Portable Machine Gun Mk1, and PIAT (Projectile Infantry Anti-Tank) weapon are also on display, as well as a Weasel M-29 vehicle. The equipment is surrounded by a plethora of newspaper articles, all types of medals, Canadian hat badges, and different types of period headgear. There is also the sobering display of a mother who lost two sons in the war, and one soldier’s story of battle and captivity comes to life with the pictures he took and his personal documents and letters while he was one of over 2,000 Canadians taken prisoner at Dieppe.

Farther down is a Polish officer’s uniform from World War II alongside a medal containing soil from the Katyn massacre, pictures of the Polish Combatants Association of Canada monument at Brantford, and a campaign medal awarded to Polish soldiers who fought all the way to Berlin. These aren’t the only Polish memorabilia in the museum, however. An album given to Benito Mussolini as a birthday present sits in immaculate condition on a pedestal. Although it was supposed to be destroyed, it was captured by Polish soldiers on November 18, 1944, after a short skirmish with German troops outside Il Duce’s summer villa.

The French and Indian War ended almost 250 years ago; it was the conflict that resulted in the conquest of New France by the British, a fate decided in battle on the Plains of Abraham outside Quebec City. The British commander was killed in the battle, and his boot scraper is on display at the CMHM.

Just past the World War II section is one devoted to the Royal Canadian Air Force. A Falcon heat-seeking air-to-air missile and a Swift training rifle are present alongside more uniforms and photographs. The story of the Canadian-built Avro CF-105 Arrow Mark 1, one of the finest fighter aircraft of its time, is related alongside photographs of the fighter project that was shot down while barely into production, before it ever reached its potential.

The Canadian Navy is represented with twin .50-caliber deck guns, followed by a section on communications and signals with vintage equipment. There is a section devoted to the contributions of women to the Canadian military service with an extensive display of medical equipment, as the Medical Corps is also spotlighted.

The CMHM is located in the region of Brantford-Norfolk-Haldimand, and the local history has its own section, along with an artillery display that includes a 25-pounder artillery piece, Gatling gun, a 9.2-inch, 290-pound artillery round from World War I, which was to be fired by the gun known as “Mother,” and a 2-pounder Vickers Armstrong anti-tank gun.

Native peoples are saluted in an excellent display of photographs and artifacts dating back to the 19th century. War clubs, flints, spearheads, battleaxes, a 1790 flintlock discovered in the local area, bows and arrows belonging to Chief Joseph Brant, and a banner given to returning native vets of the nearby Six Nations Reserve are displayed along with photographs of Native warriors who fought in the War of 1812.

An 1861 .577-caliber Snyder rifle has an oral history attached to it. According to the story, it was used at the battle of Duck Lake, Saskatchewan, on March 26, 1885. This was part of the North West Rebellion that saw the Metis people under Louis Riel take up arms against the Canadian government. There it sits, shortened to carbine length, with 27 tally marks scratched ominously into its stock. The Native presence in the Canadian military stretches into the modern day. Sergeant Tommy Prince, awarded the American Silver Star in World War II for valorous action deep in enemy territory, has his photograph displayed. To this day he remains Canada’s top sniper.

Canada was one of the United Nations member countries that sent troops to Korea during the conflict of 1950-53. More than 500 Canadians never returned from that war, and the Second Battalion of the Princess Patricia’s Canadian Light Infantry was awarded a U.S. Presidential Unit Citation for its heroic action at Kapyong. The Korean conflict has been called “the forgotten war,” but it is remembered here with items brought back by the Canadian soldiers who experienced combat on the Korean Peninsula. Chinese and North Korean money are on display alongside a vintage American bazooka.

Well over a dozen vintage military motorcycles touch on the often overlooked but not insignificant impact the vehicles have had on warfare since World War I. Local newspaper headlines about two young men who lost their lives in the line of duty serving in Afghanistan drive home the fact that Canadians are still in harm’s way. Rounding out the walk through the museum, past the rifle rack, is an extensive library.

Where and How to Find the CMHM

The museum is located at 347 Greenwich St., Building 19, Brantford, Ontario, Canada, and its mailing address is P.O. Box 27033, 794 Colborne St., Brantford, Ontario, Canada, N3S 7V1. Summer hours are 10 am to 4 pm, Tuesday to Sunday, from May 1 to October 1. Winter hours are Friday, Saturday, and Sunday 10 am to 4 pm, October 1 to November 1. The museum is closed December 1 to February 28 and is open Friday, Saturday and Sunday only from March 1 to April 30. Bus tours, seniors, service clubs, school tours and youth groups are welcome. The museum website is http://canadianmilitaryheritagemuseum.ca/.