One of the most-used military weapons in history, the FN-FAL rifle was the most successful of the NATO military rifles and was used across the globe.
Carl Gnam
No comments
Categories: Military History

British Corporal Steven Newland crept through the inky darkness toward an Argentine sniper who had pinned his troop of Royal Marines on the slopes of Mount Harriet on East Falkland Island. He and a fellow marine had painstakingly made their way up the boulder-strewn hillside in the hope of killing the harassing sharpshooter. Along the way Newland became separated from his companion, but he continued nonetheless.

Finding his target, it was worse than the young Englishman feared. An entire squad of Argentine troops awaited the marines. They were taking only single shots at their enemy, seemingly in the hope of luring them into an attack. One Argentine had a machine gun ready, the rest were armed with Fabrique Nationale de Herstal-Fusil Automatique Leger (FN-FAL) rifles.

Newland readied his own weapon, a self-loading rifle (SLR), the British variant of the FAL. Quietly he inserted a fresh magazine of 20 rounds. Taking two grenades, he pulled the pins and threw them, one landing on the machine gun and the other among a clustered group of soldiers. Ducking behind a boulder, he waited until the grenades exploded, then waded into the Argentines, shooting anyone who still moved three times. His rifle empty, he ducked behind a rock to reload. As he did so, some of his comrades below fired two rockets into the enemy position. Attacking again, he saw an Argentine he had hit earlier and realized the man was still alive as he fired a burst at Newland. The Briton felt bullets hitting his legs and flew into a rage, shooting his opponent 15 times in the head.

The Ubiquitous Small Arms of the Cold War

The Falklands War from April 2, 1982, to June 14, 1982, pitted against each other two nations that used many of the same weapons. Both had FN-Mitrailleuse d’Appui General machine guns, Browning 9mm pistols, and Exocet missiles. The most common weapon of the two sides, though, was the FN-FAL rifle, one of the ubiquitous small arms of the Cold War era. While the Avtomat Kalashnikova 47, or AK-47, was by far the most produced rifle in the Eastern Bloc, in the West a number of designs were widely used, among them the American M-16, German G-3, and the Belgian FAL. It was this last weapon that would go on to serve more than 90 nations worldwide.

Like the rifles it competed against, the FAL had its origins in the post-World War II period, as the lessons of that war were digested and incorporated into weapon designs. Most of the combatants in that conflict were armed with bolt-action rifles that fired full-powered cartridges, which were effective at ranges of 1,000 meters or more. However, studies showed most infantry combat took place at ranges of 300 to 400 meters or less, and the average soldier could not reliably hit a target at the extreme distances their weapons could range. Snipers and machine guns were more effective when long-range fighting occurred.

The idea arose to adopt smaller, less powerful ammunition that still would be effective at average combat distances but would be lighter and more compact. This would allow an infantryman to carry more of it. The lower recoil would be more manageable for conscripts unused to firearms. These new rounds were often referred to as intermediate powered cartridges.

At this time, the Belgian company FN Herstal was recovering from its nation’s occupation by Nazi Germany. The company, which was established in 1889, quickly began designing Cold War-era small arms with some success. Designer Dieudonne Saive, who had worked closely with American firearms designer John Browning, was the chief architect of the prototype of FN’s new weapon, the FAL. Test samples were chambered in several calibers including the British .280 and competed in American rifle trials in 1950, where it emerged as the favorite of a board of infantry officers. Despite this, Studler kept pushing for his preferred cartridge, and this effectively killed the .280. The West would have new rifles, but with the American-backed ammunition.

From there interest in the new rifle grew quickly. Some armies turned to the FAL perhaps to spite the United States after the way it pressured NATO to adopt the 7.62mm cartridge and then the M-14, which few nations purchased. The United Kingdom followed quickly, adopting its own variant of the FAL called the L1A1 SLR. Commonwealth nations such as Australia, New Zealand, Rhodesia, and others followed suit. The United Kingdom rifles were modified for semi-automatic fire only and many other nations over time did the same. This was because the full-powered 7.62mm round caused the rifle to rise markedly when fired on a full-automatic setting, ruining accuracy and wasting ammunition at all but point-blank range.

With the Commonwealth using the FAL, the rifle quickly drew attention elsewhere. Venezuela bought 5,000 in an unusual caliber similar to the .280, but later adopted the 7.62mm. Argentina and Brazil followed suit, manufacturing hundreds of thousands of the rifles over the next several decades. India and Israel also produced their own weapons for both domestic and export use. Eventually, the FAL could be seen across South America, Africa, and Asia.

This story was first published in Military Heritage Magazine. Order your subscription here! 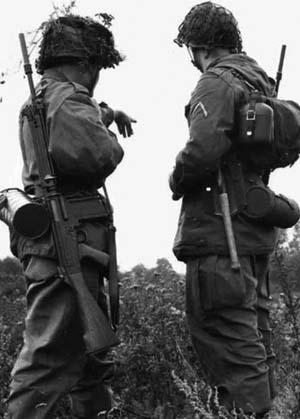 As with most successful designs, variants began to appear. A paratrooper, or Para, version with a folding stock was among the first. These frequently came with shorter barrels to keep airborne troops from snagging their rifles when exiting an aircraft’s door. Several light machine-gun versions appeared with bipods, heavy barrels, and 30-round magazines. These were not universally popular, though. The United Kingdom, for example, converted Bren guns to 7.62mm instead.

A standard FAL rifle weighs 9.5 pounds, and Para versions usually weigh about a pound less. Standard barrel length is 21 inches, and overall the rifle is 43 to 45 inches long, depending on variant. The rifle is gas operated, meaning a small amount of the gas created by firing a round was used to cycle the bolt, ejecting the spent casing and loading a fresh round into the chamber. The standard magazine holds 20 rounds, though 30-round versions exist in small numbers. Both wood and plastic stocks can be found. The FAL can be fitted with scopes, bayonets, grenade launchers, and night vision devices.

Almost as soon as it entered service the FAL began to see combat. It went with British troops to Malaya and various flashpoints around the Middle East, Africa, and Asia. Though the rifle was intended for the expected confrontation between NATO and the Warsaw Pact, it proved effective in the open desert terrain where the 7.62mm cartridge’s long range was an advantage.

Over time FALs appeared in the hands of rebels and antigovernment forces as well. The FALs gradually appeared on the surplus market. What is more, many FALs were either looted or liberated from government armories, depending on one’s point of view. While the AK-47 series is by far the most common infantry rifle used in Africa today, FALs are still found. The African nations using the FAL appreciate it for its hitting power and reliability.

One of the last major conflicts for the FAL in the West was the Falklands War. Both sides used the weapon as their standard infantry arm, with the Argentines also using the heavy-barreled light machine gun version as a squad automatic weapon. Some Argentine troops also had scopes mounted for sniping; a few were very effective in this role. Both sides used night-vision devices, but the British model had a shorter effective range, something their enemy exploited by giving the night-vision devices to their better marksmen. One British sniper had so much trouble with his antiquated Enfield sniper rifle he got rid of it and used a captured FAL with open sights.

The Argentine FALs retained their full automatic capability. In normal infantry fighting this proved no real advantage, but when engaging low-flying aircraft, such as helicopters, it proved its worth on at least one occasion. Argentine Lieutenant Carlos Esteban led his platoon away from the British landing site at San Carlos when it was clear he was outmatched by the large enemy force. Taking flight into the nearby hill country, they were surprised to see a British helicopter fly overhead. Moments later another helicopter, a Gazelle, appeared and now the Argentines were ready. All of them fired their FALs on full automatic, creating a storm of fire around the aircraft. Suffering numerous hits, the Gazelle made a forced landing in the waters of a nearby bay. As the aircrew swam to shore, a few of the Argentine soldiers began to fire at them until Esteban stopped them.

The officer then led his platoon farther into the hills away from the British. Suddenly, two more Gazelles flew overhead, one after the other. The Argentines again unleashed their torrent of rifle fire. One Gazelle crashed, killing both crewmen and landing only 10 meters from Esteban. The second was hit at least 14 times but the pilot managed to get away and make an emergency landing on a nearby ship. It was a sobering lesson for the British in what concentrated rifle fire could do to a low-flying helicopter.

In the 21st century, the FAL has remained in use despite its replacement as a first-line rifle in many militaries. They are occasionally still seen in use by British and Australian SAS units in Afghanistan, where many battles are fought at longer ranges due to the mountainous terrain. Often troops on the side of one mountain are fighting with insurgents on the side of another mountain. In such conditions, the long range of the 7.62mm cartridge is appreciated.

The FAL rifle is not a perfect infantry weapon, but it is by far the most successful of the Cold War-era 7.62mm NATO military rifles. Admittedly, it is heavy and long, making it cumbersome in close quarters. But it is a reliable rifle, and its powerful cartridge can penetrate tree trunks, brick walls, and most modern body armor at close ranges. Given its widespread use on every continent, the FAL will undoubtedly be seen in action for decades to come.