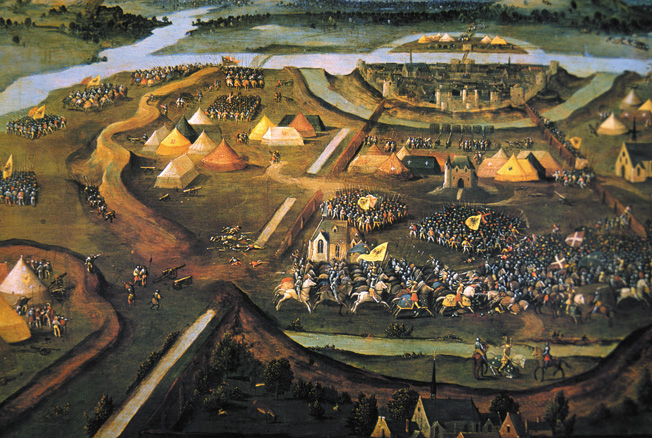 More than any other commander, Fernando Francesco de Avolos, the Marquis of Pescara, was responsible for the victory over the French at Pavia.

Although Charles de Lannoy, the viceroy of Naples, was the nominal commander of the Imperial forces in the battle, Fernando de Avolos, Marquis of Pescara, controlled the army’s real muscle, its arquebusiers. Pescara’s influence on the outcome of the battle was so profound that a number of contemporary and modern accounts assume that he, rather than Lannoy, commanded the entire Imperialist army fielded at Pavia.
[text_ad]
Pescara was born in Naples to a family of Spanish origin in 1496. Although Italian by virtue of his birthplace, he considered himself a Spaniard. His grandfather had relocated from Spain to Naples in the fifteenth century, where he married a well-to-do Italian woman and acquired the title of Marquis of Pescara. The title was passed along to Pescara’s father, who died during the French invasion of Naples when Fernando was very young. Pescara spoke Spanish at all times, and when he became a military commander he surrounded himself with Spanish subordinates.

Pescara commanded a unit of light cavalry at the Battle of Ravenna on April 11, 1512. The battle was a disaster for the combined Spanish-Papal army in which the young noble served. Pescara was wounded and captured, and during his imprisonment he wrote poetry dedicated to his wife. He was allowed to ransom himself after one year and soon returned to military service.

Upon his return to duty, Pescara was given command of the infantry and served under Raymond of Cardona, the Viceroy of Naples. Pescara’s innate talent for infantry command was first exhibited in the Battle of La Motta, fought between the Neapolitans and Venetians on October 7, 1513. Before the attack, with Ravenna fresh in his mind, he instructed his soldiers to kill him if he fell wounded, preferring death to being captured again by the enemy. Fortunately, Pescara’s adroit handling of the arquebusiers and pikemen serving under him at La Motta contributed to a Neapolitan victory, making such a dire course of action unnecessary.

Pescara played a key role in the 1521-22 campaign in north Italy during which Italian General Prosper Colonna recaptured Milan at the head of a combined Spanish-German-Papal army. When the French returned the following spring to try to drive Colonna out of Milan, the two sides clashed at Bicocca on April 27, 1522. The battle began in earnest when Swiss mercenaries fighting for the French made an unsupported frontal attack. Pescara had placed his arquebusiers four ranks deep in a strong position along a sunken road to await the enemy. The Swiss, cocky from a string of victories through the years, were decimated by small-arms fire from well-protected arquebusiers and suffered 3,000 casualties.

After the battle, Pescara was devastated when Charles V appointed Colonna commander-in-chief of all Imperial forces in Italy, rather than him. He journeyed to Spain to appeal the decision in person to the emperor. Charles listened with sympathy to Pescara’s case, but convinced the marquis to continue serving under Colonna. The journey was not without some benefit. Pescara’s character and his abilities as a commander made a strong impression on Charles.

Pescara continued to serve under Colonna when William de Bonnivet invaded Milan at the head of a new French army in October 1523. Colonna fell back in the face of the French advance until he could be reinforced by German Landsknechts. When Colonna died in December, he was replaced by Charles de Lannoy, Viceroy of Naples. In March 1524, Lannoy went on the offensive, catching Bonnivet by surprise and driving him steadily west toward the French border.

Pescara would get a chance to test his arquebusiers under a new set of circumstances in this phase of the campaign. While Bicocca proved that arquebusiers could defeat an attacking force from a protected position, the Battle of Sesia, on April 30, 1524, proved that arquebusiers could fight equally as well on the offensive. With the French in a headlong retreat, Pescara ordered his arquebusiers forward both on foot and on horseback to positions from which they could pour a withering fire into the retreating French, who had few, if any, arquebusiers of their own to return the fire. Pike units were cut up, artillery captured, and French nobles killed in the one-sided battle.

Pescara co-commanded the subsequent invasion of Provence in July 1524 with Charles III, Duke of Bourbon. The former Constable of France had gone over to the Imperialist side earlier in the year. Pescara performed well during the campaign and managed to get the expeditionary force safely back to Italy before Francis invaded Milan in October.

At Pavia, Pescara was in the thick of the action inside Mirabello Park. He managed not only to keep the raiding party from dispersing to loot the French baggage train after it captured Mirabello Castle, but also to redeploy the Imperialist forces inside the park to defeat the French heavy cavalry. Wounded in the battle, he retired to Milan to regain his strength. During that time, he was approached by papal emissaries who tried unsuccessfully to persuade him to join a pro-French alliance. Pescara died unexpectedly from a duodenal ulcer on November 4, 1525. Pavia was his last, and greatest, battle.