You are just a few moments away from discovering more about the history of the Second World War than you ever imagined. 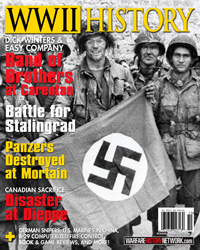 Allow me to introduce WWII History Magazine, the completely original, exquisitely produced coffee table magazine that’s worthy of being named after the most important war in all of history. No matter how long you’ve been fascinated by the Second World War, and no matter how much reading and research you’ve done, WWII History is sure to bring you a new and fresh perspective on the Greatest of Conflicts.

The first thing you’ll notice is that WWII History looks and feels more like a book than it does a magazine. Instead of being just a handful of glossy papers stapled together, WWII History features a straight, flat spine. Known in the publishing industry as “perfect binding,” this book-style binding allows you to store your collection of WWII History on your shelves along with the rest of your history library. The volumes stand up straight and the name, date, and ID number on the spine make it easy for you to find the volume you need each time you turn to your collection.

…And collect them you will, because WWII History is more akin to the permanent reference in your library than the regular magazines you just flip through and discard.

The artwork, for example, is carefully culled from selective sources the world over. Dozens of rare photographs, colorfully crisp paintings and meticulously detailed drawings bring the events they depict to life. Even the pages themselves are thicker, glossier, and much more durable than those you find in most other magazines.

Now Available Online, Or In Print! 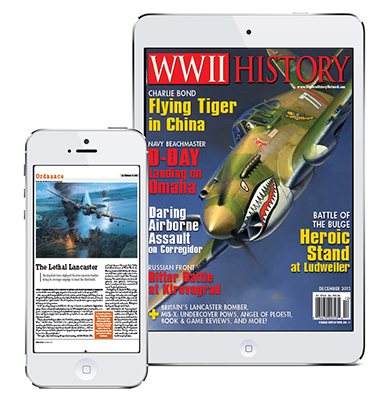 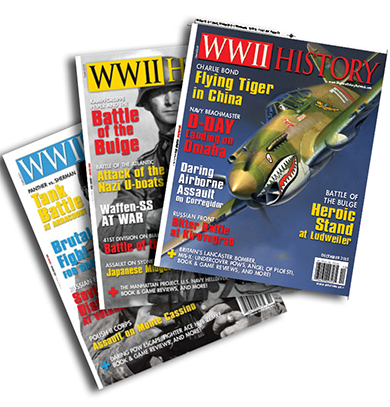 And I still haven’t mentioned the most valuable and unique aspect of WWII History: the features and regular Columns you’ll find in each issue.

Like me, you’ve probably spent time and money on World War II books and periodicals that disappointed you because they only contained information you’ve already seen. So our editors and contributors approach each new article with one simple editorial guideline in mind: Keep it fresh. We carefully apply the test of originality to each piece presented for publication. If it doesn’t pass, it doesn’t get in. No exceptions.

And while our editors and contributors work under a strict demand for originality, they have no such guidelines for length. Our editorial position is to take as much space as needed to fully explain what is most important, different, or interesting about the subject. Generally, our articles are longer than those you’ll find in most history magazines—not padded or overblown, just a little longer; simply because they explain their subjects in greater detail than most others.

What kind of articles? Well, in just your first few issues of WWII History you are likely to find stories like: 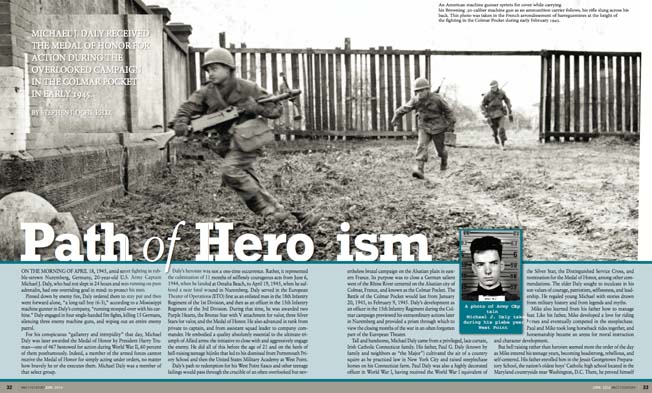 Build Your Collection With Each Striking Issue

Issue after issue, your knowledge and understanding of the Second World War will continue to build. The Fall of France and Battle of Britain. The 101stAirborne’s Easy Company, led by Major Dick Winters. The Japanese aerial onslaught off the coast of Guadalcanal. The Battle of Esperance, the first surface victory for the U.S. Navy in the War. The controversial Dieppe Raid. Patton vs. the Hermann Goering Division in Sicily. The Last stand by Free French forces at Bir Hacheim. The heroic defense of Leningrad. The American calamity at Kassarine Pass. Even a disastrous convoy mishap in the Arctic. All brought to you by a name that’s well-known and trusted by military history students and buffs.

WWII History is the sister publication to Military Heritage magazine, under the editorial direction of Carl Gnam. The founder of Military Heritage and many other successful magazines, Carl shows you World War II as if you were there. His editorial guidance brings you a balanced mix of firsthand accounts of the battles, the strategies and tactics, and the weapons and technology that changed the world forever.

The events and battles of the Second World War changed the world forever. And now, I hope you’ll join me in discovering these milestones in history by subscribing to the magazine that covers them all. Available in both print, and digital editions.