The World War 1 destroyers employed by the U.S. led directly to America's dominance in the 20th century's most decisive naval battles.

The dawn of the 20th Century was a liminal period for American foreign policy, and subsequently, naval tactics and technology. The Chilean Civil War of 1891 and Sino-Japanese War of 1894 illustrated the lethal ability of torpedoes and torpedo boats, causing naval planers around the world to begin considering countermeasures for what they saw as a new era of maritime warfare defined by quick-strike capability. These events and reactions would create a new class of warship known as the destroyer, and subsequently, the dominance of the U.S. Fleet.
[text_ad]

Early destroyers commissioned by the U.S. Navy were coal-powered, around 250-feet, and armed with two 3-inch guns, five 6-pounders, and two 18-inch torpedo tubes. They were built for speed and maneuverability, but with enough firepower to engage capital ships. Their primary mission was scouting, maneuvering in shallow water and defending against torpedo boats. During the era of World War 1 battleships, torpedo technology lacked range and accuracy, never fully evolving into the threat planners had envisioned them to be. Though destroyers were incepted to combat torpedo boats, the fleet quickly shifted their focus to combat the evolving submarine threat that would present itself during World War 1. 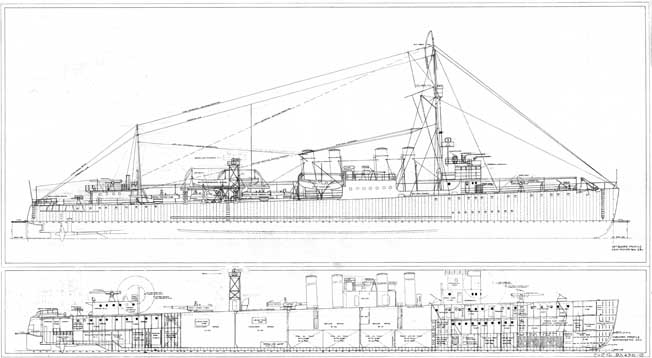 As a result of the Naval Appropriations Act of 1916, the U.S. began building a navy “second to none,” with the ability to protect both the Atlantic and Pacific coasts. This plan called for 10 battle cruisers, 10 cruisers, 50 destroyers, and 72 submarines; only two of the battle cruisers would be completed—as aircraft carriers—but 200 more destroyers were added to the strategic enlargement. The destroyer fleet enlargement was completed in three phases, separated into Calwell, Wickes, and Clemson classes, with the Wickes and Clemson classes composing the majority of U.S. Navy destroyer capacity after 1917. Improved from the 1901 models, World War 1 battleship destroyers had characteristic “flush decks,” or a level deck which ran the length of the keel, steam turbines, four 4-inch deck guns, twelve 21-inch torpedo tubes, one 3-inch anti-aircraft gun, and two stern-mounted depth charge racks. The latter upgrade would be crucial armaments in combating German U-boats.

After declaring war on Germany in 1917, American battleship destroyers would become crucial in protecting Allied supply convoys from German U-boat attacks. Up to this point in the war, the Allies had no sufficient answer for German submarine tactics, which in early 1917 had sunk 900,000 tons of Allied cargo in January alone. Once U.S. destroyers were attached as escorts to merchant convoys, supply chain problems in the Atlantic were largely subverted and the momentum of the war began to swing.

At the end of World War 1, the U.S. Navy had commissioned more than 250 destroyers, making it the largest destroyer force in the world. But due to the Disarmament Treaty of 1922, the U.S. was required to decommission more than 200 ships from its new destroyer community.

The U.S. Navy’s destroyer force of World War 1 set the foundation for anti-submarine warfare and further technological innovations within the American fleet. Becoming a platform for various armament configurations throughout her evolution, the destroyer has become the U.S. Navy’s modern day, multi-mission workhorse. Though initially conceptualized to combat a short-lived threat, the destroyer quickly exhibited her versatility and has grown into one of the United States Navy’s primary surface warfare platforms.