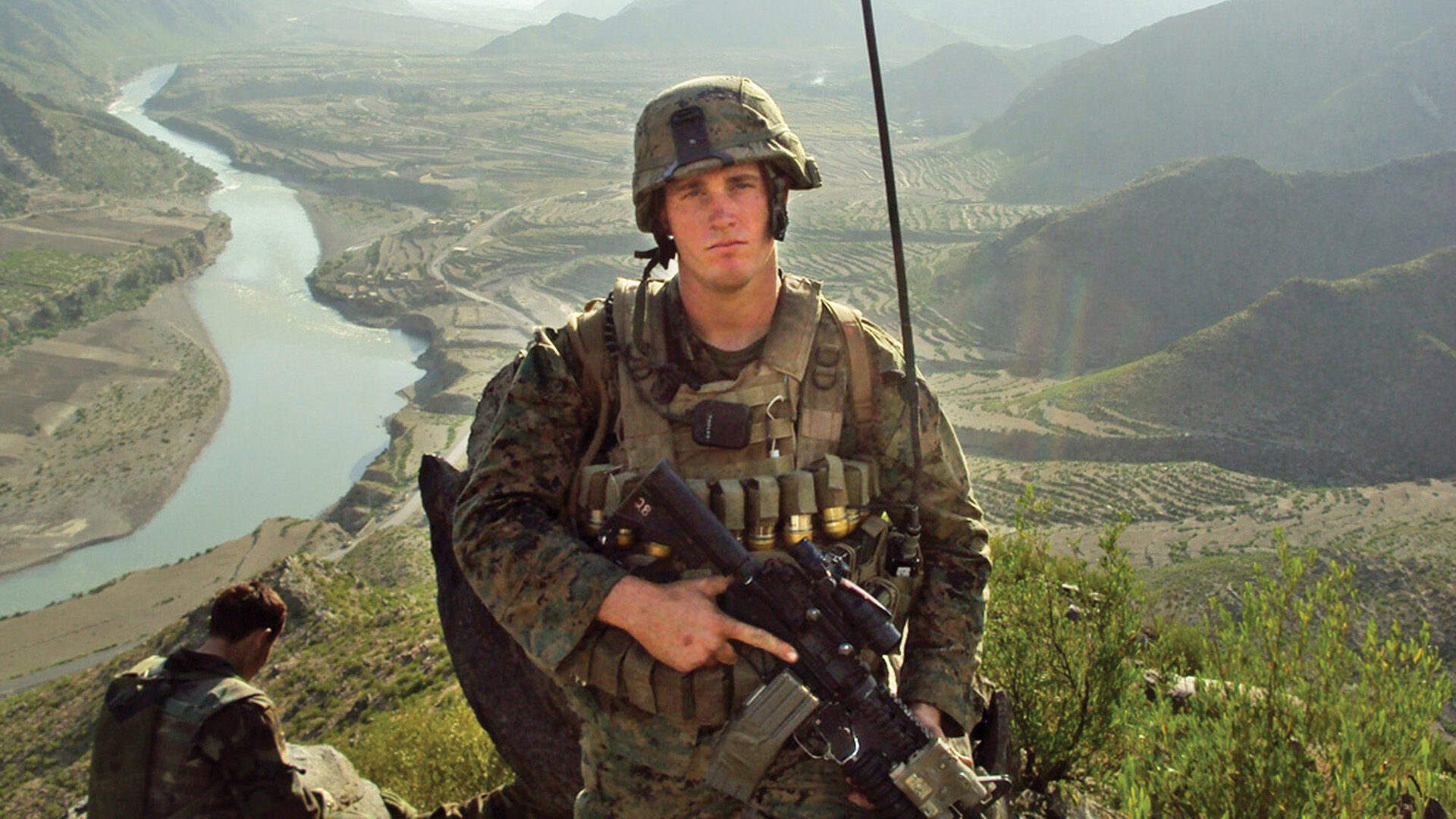 Moonlight bathed the dusty narrow path leading into the village of Ganjal shortly before sunrise on September 8, 2009, as nearly 100 soldiers climbed out of more than a dozen vehicles a mile from the seemingly peaceful village. A force of American Army and Marine Corps advisers and the Afghan National Security Force troops and Afghan border police that they were training formed up a mile from the village and headed east towards the modest mud-brick homes of Ganghal. They planned to meet that morning with tribal elders and check the village for weapons.

The Americans always took precautions to ensure their safety when visiting remote villages. One of these precautions was to establish observation points on the high ground to monitor the situation and direct fire support. Two groups of soldiers peeled off from the main force and took up positions northwest and southwest of Ganjgal to carry out these security functions. Two Marines had remained in the rear at a rally point where the vehicles were parked with a platoon of Afghan soldiers to serve as a quick-reaction force.

The Taliban had begun to reassert itself in Afghanistan as early as 2005. When U.S. President Barack Obama took office on January 20, 2009, he redoubled U.S. efforts directed against the Taliban insurgency. The president and Joint Chiefs of Staff wanted to eliminate Taliban safe havens along the country’s 1,600-mile-long border with Pakistan and step up efforts to train the Afghan soldiers to assume responsibility for defending their country. To achieve these goals, Obama directed the Defense Department to initially send 17,000 fresh troops as part of a surge to augment the 68,000 U.S. and NATO forces already in the country. He appointed General Stanley McChrystal to oversee the surge.

To disrupt the flow of arms and ammunition the insurgents received across the border from Pakistan, U.S. forces had established since the war began in 2001 forward operating bases and combat outposts along infiltration corridors that led from the Hindu Kush into the fertile river valleys of eastern Afghanistan.

At Combat Outpost Monti, which was situated along the Kunar River 10 miles north of FOB Joyce, the four-man unit of Marine Corps’ Embedded Training Team 2-8 arrived in summer 2009. ETT 2-8 consisted of 21 Marines who were divided into small groups to train Afghan forces at five combat outposts in northeastern Afghanistan. The four advisors assigned to Team Monti were responsible for training a company of ANSF soldiers billeted at the outpost. The forces at Monti were an appendage of the American forces stationed at FOB Joyce, which was the headquarters for the 32nd Infantry Regiment, 3rd Brigade Combat Team of the U.S. Army’s 10th Mountain Division.

Twenty-one year-old Marine Corporal Dakota Meyer, a native of Columbus, Kentucky, and an Iraqi War veteran, served as the weapons trainer on Team Monti. In addition to Meyer, the other members of the team were Navy Corpsman James Layton, Staff Sergeant Aaron Kenefick, and Team Leader Lieutenant Mike Johnson. Meyer trained the Afghan soldiers in weapons, operations, and tactics.

Lieutenant Johnson received orders in early September to bring most of the Afghans at Combat Post Monti to Joyce to conduct a security mission to Ganjal. The village elders in Ganjgal wanted to convene a shura, or consultation, with the Americans to request assistance for improvements to their mosque in exchange for allowing the U.S.-backed government in Kabul to establish a police post in their village.

Army officers planning the security mission to Ganjgal, which was called Dancing Goat II, pushed the mission back a day. This enabled locals who had been informed of the mission to alert the Taliban that an Afghan-American force was coming to the village.

The members of Team Monti arrived at Camp Joyce on September 7, the day the mission originally had been scheduled to occur. The force for Dancing Goat II numbered 15 American advisors, 60 Afghan soldiers, and 20 Afghan border police. Army Major Kevin Williams commanded the force.

The hamlet of North Gangal consisted of 50 mud-brick houses, known as compounds, with courtyards enclosed by high walls, and the smaller hamlet of South Ganjal situated 300 yards to the southeast. The villagers farmed on terraces with retaining walls. At the base of the low hills on which the hamlets were located was a wash created by river floods. Ganjgal was surrounded on three sides by a horseshoe-shaped high ridge, with the only easy entrance into the valley being from the west via the wash.

To his great consternation, Meyer had been told the day before that he was to remain, along with Marine Staff Sgt. Juan Rodriguez-Chavez, at the rally point with a platoon of the Afghans that would be held in reserve. Marine Gunnery Sgt. Edwin Johnson, a logistics specialist from Joyce who wanted additional combat experience, would be taking Meyer’s place with the three other members of ETT 2-8.

The force possessed four Humvees that were parked at the rally point. Each Humvee had either a turret-mounted .50- caliber machine gun or a 40mm grenade launcher. If needed, Meyer and Rodriguez-Chavez could drive a Humvee to the village to furnish covering fire.

The local Taliban leader, Quari Zia Ur-Rahman, brought 70 insurgents to the village the night of September 7-8. He distributed his troops in a three-sided ambush, placing them in trenches and bunkers constructed in the village in previous years. The insurgents were armed with mortars, recoilless rifles, heavy machine guns, grenade launchers, and automatic rifles.

The Afghan-American force began its slow trek from the rally point towards Ganjal to meet the tribal elders at 4:00 a.m. The members of Team Monti marched at the front of the column, followed next by Major Williams’ command group, and behind it the Afghan soldiers and police.

When the head of the column came to within 100 yards of the hamlets just before 5:30 a.m., the Taliban insurgents opened fire. The members of Team Monti sprinted to take cover in the compound of the nearest house in South Gangal. The command group, which included an embedded journalist, sought cover behind a terrace wall 150 yards from the hamlets. During the course of the firefight, Army Captain William Swenson and Staff Sgt. Kenneth Westbrook joined the command group. The Afghan troops scattered to take cover behind terrace walls and boulders.

The command group immediately reported contact to the Tactical Operations Center at FOB Joyce and requested fire support. Within 10 minutes 120mm mortars at Joyce began firing on the Taliban positions. The Taliban succeeded in inflicting casualties on all section of the column.

When the 120mm mortars stopped firing after one hour, the column came under increasingly heavy pressure. Although the watch commander at Joyce had requested helicopter support as soon as contact was made, it was tied up and would not arrive until 7:30 a.m. The watch commander and those assisting him at Joyce declined to clear a fire mission by 155mm howitzers because they said they did not know whether it would inadvertently kill civilians, which was something McChrystal had directed American forces to avoid at all costs.

Meyer and Rodriguez-Chavez requested permission over the tactical radio network during the first hour of the firefight to drive one of the Humvees into the kill zone to collect wounded and furnish covering fire. After receiving permission from Marine Staff Sgt. Guillermo Valadez, who was stationed at the observation point on the north ridge, Rodriquez-Chavez drove towards the fighting, with Meyer manning the Mark 19 automatic grenade launcher in the exposed gun turret. It was the first of five trips into the kill zone that Meyer would conduct that morning. They collected some of the Afghans and drove them to safety at the rally point.

When the villagers joined the fight, the insurgents and villagers succeeded in driving the Marines of Team Monti out of the compound on the western outskirts of South Ganjal. They retreated to a trench, but at some point before 7:00 a.m., the insurgents overran Team Monti’s position and killed all four members of the team.

A pair of Kiowa Warrior Helicopters from the Palehorse Squadron of the Army’s 7-17th Cavalry arrived on station two hours after the battle began. Meyer and Swenson established radio contact with them and directed them to Taliban positions. The Kiowa pilots immediately began repeated strafing runs with their machine guns and rockets on the enemy positions. The crews of the Kiowas stayed on station until all of the troops had been extracted four hours later.

The second excursion into the kill zone that Meyer and Rodriquez-Chavez made was in a different Humvee, and Meyer took up a position on an M2 50-caliber machine gun. As they drove east, Marine Staff Sgt. Chad Miller warned Meyer over the radio of approaching enemy soldiers. Ten insurgents on the north side of valley advanced against the lone vehicle. Meyer swung the weapon to the left, but the enemy were extremely close and he could not depress it far enough. He picked up his M4 and shot one of the insurgents at point-blank range. “I saw a single enemy go down from a round hitting him in the head,” Rodriguez-Chavez said.

The two Marines collected more wounded and again withdrew to the rally point. The presence of the helicopters eventually enabled the Americans at the command post to withdraw safely from the kill zone.

The battle dragged on for the remainder of the morning to get all of the Afghans to safety, and to locate Team Monti, with which the command group had lost contact at 7:00 a.m.

Meyer’s third trip into the wash began just before 10:00 a.m. Meyer and Rodriquez-Chavez were joined in a vehicle by Captain Swenson and Marine First Lieutenant Ademola D. Fabayo. One of the Kiowa helicopters flew 15 feet above a string of five vehicles seeking to evacuate the troops in the ambush area. During this time, the Americans attempted to gather as many of the remaining American and Afghan troops and police into the vehicles as possible.

Meyer, who by that time had been wounded by shrapnel in the arm, went back into the wash two more times. The crew of one of the Kiowas located the slain members of Team Monti shortly after 11:00 a.m. On his fifth trip into harm’s way, Meyer worked with Swenson, while under fire from the enemy, to retrieve the slain Marines of Team Monti, whose bodies were flown back to Joyce.

The Americans suffered four killed and three wounded, while the Afghans lost nine killed and 19 wounded. One of the wounded Americans, Sergeant Westbrook, later died of complications. Meyer’s Medal of Honor citation states that he and Rodriquez-Chavez acted promptly at the outset of the battle to assist those pinned down in the ambush. The two Marines undertook three trips in one Humvee before enough Americans had gathered at the rally point to take multiple vehicles to retrieve the remaining Afghan soldiers trapped in the ambush.

“Despite a shrapnel wound to his arm, Corporal Meyer made two more trips into the ambush area in a third gun-truck accompanied by four other Afghan vehicles to recover more wounded Afghan soldiers and search for the missing U.S. team members,” reads the citation. Last but not least, Meyer adhered to the policy of never leaving a fellow Marine behind by helping recover the bodies of the four fallen Marines.

“Meyer’s daring initiative and bold fighting spirit throughout the six-hour battle significantly disrupted the enemy’s attack and inspired the members of the combined force to fight on,” states the citation.

President Barack Obama presented Meyer with the Medal of Honor on September 15, 2011, in a White House ceremony. Obama noted during the ceremony that Meyer performed repeated acts of bravery. His story of valor, the president told the audience, “will be told for generations.”