Walking in the Steps of the Overmountain Men at Kings Mountain

The Patriot riflemen slowly crept uphill through thick growth and large boulders toward the enemy position atop the low ridge in the backwoods of South Carolina on the afternoon of October 7, 1780. Colonel William Campbell had divided his 900-man army into eight detachments that advanced from different directions toward the unsuspecting Tory encampment. Gone was the heavy rain of the previous day that muffled the steps of the Patriots as they advanced. But brooding clouds hung low in the sky occasionally dispensing a light rain.
[text_ad]

British Major Patrick Ferguson, commanding the left wing of General Lord Charles Cornwallis’ advance north through the southern colonies, had deemed it sufficient work to occupy the high ground on the bald crest of the ridge. For that reason, he decided not to order the rank and file of his 1,000-man army to construct breastworks along the sides of the ridge near the crest to further protect his men from a sudden attack by the rebels.

The rebels struck the west end of the ridge first. “We were soon in motion, every man throwing four or five balls in his mouth to prevent thirst, also to be in readiness to reload quickly,” wrote Patriot James Collins.

The Road to Battle

Having had little success carving up the northern colonies after four years of warfare, the British had switched their offensive operations to the southern colonies in early 1780. The key port of Charleston, South Carolina, fell to the British on May 12 after which they established fortified garrisons in the backcountry from which they could conduct operations against the rebellious inhabitants of the Carolinas.

The Fabric of Victory

Campbell’s army comprised mounted Carolinians and Virginians from west of the Appalachian Mountains, the so-called Overmountain Men, who crossed to the east side of the mountain chain in late September. The frontiersmen thirsted for revenge against Ferguson, who had incited Loyalists to plunder Patriot homesteads in summer 1780. The Overmountain Men concentrated at Sycamore Shoals of the Watauga River on September 26 and continued east into the Piedmont.

When the battle erupted atop Kings Mountain at 3 PM on October 7, the Patriot riflemen used the ample cover at the top of the slopes to protect them as they fought guerilla-style against the surprised Tories. They advanced from tree to tree tightening the noose around the Loyalist army. Twice the Tories charged, but they failed to dislodge the tight grip the Patriots had on the mountain.

Ferguson rode up and down his battle line blowing a silver whistle by which he conveyed commands to his men. He made an easy target on his horse, and during the thick of the fighting he was struck by several bullets. He died shortly after being hit. 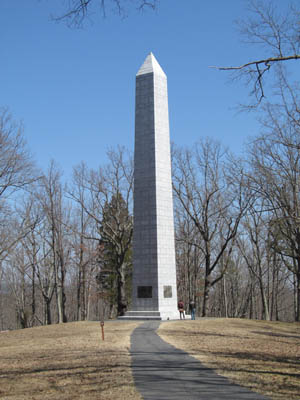 Ferguson’s second in command, Captain Abraham de Peyster, ordered a white flag raised to signal surrender. The Patriots suffered about 90 casualties. As for the Tories, approximately 300 were killed or seriously wounded. The wounded who survived were taken prisoner along with the rest of Ferguson’s defeated army.

What to See and Do

The National Park Service has laid out a 1.5-mile self-guiding battlefield trail at Kings Mountain National Military Park that enables visitors to see the battle as it unfolded from the perspective of both Patriot and Loyalist soldiers.

The paved trail curves along the slope of the ridge to afford the viewpoint of the attacking Overmountain Men, and it also snakes across the top of the ridge to give an idea of what the Tories defending the summit of the ridge saw that day. Visitors can stop at the visitor center to pick up maps, browse the bookstore, view the orientation film, and see special exhibits.

During the summer months, staff and volunteers work together to present a number of dynamic activities at the park, including concerts, ranger walks, and living history programs.

Kings Mountain State Park is adjacent to the battlefield. The expansive park offers a wide range of recreational opportunities, such as camping, hiking, picnicking, horse riding, and boating.