The Viking Raid on Lindisfarne Monestary

The shocking raid on the Christian priory at Lindisfarne was only the beginning as the Vikings pillaged throughout Western Europe.

“Never before has such a terror appeared in Britain as we have now suffered from a pagan race…The heathens poured out the blood of saints around the altar and trampled on the bodies of saints in the temple of God, like dung in the streets…Behold the church spattered with the blood of the priests of God,” wrote a Northumbrian scholar named Alcuin in the wake of the horrific Viking raid on the great monastery at Lindisfarne in Northumbria in the year 793.
[text_ad]

Perhaps the Vikings had embarked on earlier raids, possibly on Dorchester in 789, but Lindisfarne is remembered as their most infamous assault on Christendom and by many historians as the beginning of the Viking Age.

Founded in 634 by Saint Aidan, an Irish monk who had been sent to Northumbria from the island of Iona near the west coast of Scotland, Lindisfarne served as the base from which Christian missionaries spread the Gospel into Northern England. At the time of the Viking raid that devastated the monastery, it was already 150 years old. The Anglo-Saxon Chronicle, a history of the people written in Old English, recounts a series of prophetic events that occurred prior to the arrival of the Viking horde.

Fierce, Foreboding Omens for the Monestary

“In this year fierce, foreboding omens came over the land of the Northumbrians, and the wretched people shook; there were excessive whirlwinds, lightning, and fiery dragons were seen flying in the sky,” reads the Chronicle. “These signs were followed by great famine, and a little after those, that same year… the ravaging of wretched heathen people destroyed God’s church at Lindisfarne.” 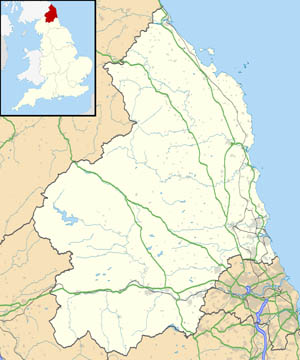 As the Christian church became rooted in England, many monasteries and Christian settlements were located away from major population centers. Some were established near the mouths of rivers, along remote areas of the seacoast, or on small littoral islands, as Lindisfarne was. These early Christian enclaves were far from the politics and interference or resistance of government or other official entities, and it appears that there was little concern for the security of these religious outposts. They also became repositories for the wealth of the church, including valuables of gold or silver that were used in worship services. As self-sustaining settlements, they were usually rich in foodstuffs, grain, and cattle.

Although the record is unclear, it is believed that the Vikings shattered the quiet solitude of Lindisfarne sometime during the first week of June in 793, slaughtering the inhabitants, pillaging the monastery’s valuables, and destroying most of what they could not carry. Having discovered such a vulnerable and profitable target, the Vikings were undoubtedly encouraged to continue their raiding forays. The Christian church in England and beyond was, in turn, profoundly shocked at the savagery displayed by the bloodthirsty pagans.

The Vikings Establish Themselves in England

After the devastating raid, Lindisfarne remained a center of the Christian church in England, and its location became known as the Holy Island. Its priory was established and abandoned with the tides of political upheaval, and Danish settlers occupied the area in the Eighth century, causing the inhabitants of the monastery to flee in the year 875. The priory was reestablished in the year 1093 and operated until the reign of King Henry VIII in 1536. Its ruins are visible today.

The Vikings established settlements and continued raiding in the British Isles and Western Europe for years after Lindisfarne. Those priests and monks who witnessed their violent acts and were fortunate enough to survive were often the most literate members of society. Their writings on the savagery of the Vikings have shaped the modern perception of these seafaring Scandinavian plunderers.