The Rise of Napoleon Bonaparte

As a young artillery officer, Napoleon Bonaparte gained prominence with heroic exploits at Toulon and Paris during the French Revolution.

Born on the island of Corsica to parents of minor nobility on August 15, 1769, Napoleon Bonaparte, the future Emperor of France and one of the leading military strategists and tacticians in history, graduated from the French military academy, the prestigious École Militaire, in September 1785, ranking 42nd in a class of 58.

As the French Revolution erupted, Napoleon, a lieutenant of artillery, spent long months in his native Corsica while rival factions, including nationalists, royalists, and radicals, vied for control of the island. He eventually sided with the Corsican Jacobins, opposing an independence movement, and despite long periods away from the army, was promoted to captain. He rejoined his regiment in the French city of Nice in June 1793.

By then, the governing National Convention had abolished the monarchy and exerted tremendous influence on the daily lives of the French people. However, in some areas of the country, particularly outside Paris, many Frenchmen disagreed with the government’s policies and incited open rebellion. Civil unrest broke out across France, and the National Convention was compelled to send troops to restore order in several major cities.

Revolutionary France was also at war with various monarchies in Europe, and at the port of Toulon on the southern coast rebels had actually invited British warships into the harbor, effectively handing control of the city to the principal enemy of France. During the fighting at Toulon in the summer of 1793, the commander of the National Convention forces’ artillery was wounded. Through the influence of Antoine Saliceti, a political officer who accompanied the army to Toulon and happened to be a fellow Corsican and friend of the Bonaparte family, young Napoleon was given command of the artillery at Toulon.

Promoted to the rank of major in September and to adjutant general the following month, Napoleon formulated a plan to capture a hill with a commanding view of the British positions around the city. From there, his guns could fire on the harbor below, and the enemy might be forced to withdraw. On December 16, during the assault to capture the heights, Napoleon received a bayonet wound in the thigh. Nevertheless, the hill was taken, and the British withdrew. Within a week of the victory, he was promoted to brigadier general at the age of 24. 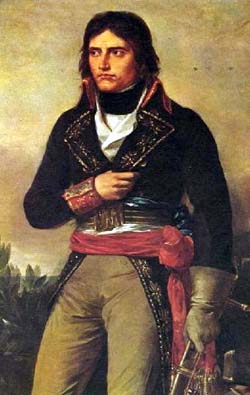 Napoleon’s writings in support of the National Convention had already gained him the favor of Augustin Robespierre, the younger brother of Maximilien Robespierre, the primary leader of the continuing French Revolution. Serving as a political officer with the army, Augustin wrote to his brother praising Napoleon’s conduct at Toulon, and the following February Bonaparte was named commander of the artillery of the French Army of Italy.

Robespierre was driven from power during the Thermidorian Reaction in July 1794, and Napoleon was imprisoned but soon released and assigned to the Bureau of Topography in Paris. In October, the French capital was rocked by an insurrection. Thermidorian leader Paul Barras knew of Napoleon’s military exploits at Toulon and placed him in command of the forces defending against the uprising. During the ensuing battle, remembered as 13 Vendémiaire, Napoleon utilized artillery to defeat the rebels.

In a single day, the youthful officer earned the gratitude of the new government, known as the Directory. He was given command of the Army of Italy and appointed Commander of the Interior. The star of Napoleon Bonaparte was ascendant, and he rose to dominate the political and military scene in Europe for the next 20 years.

One thought on “The Rise of Napoleon Bonaparte”