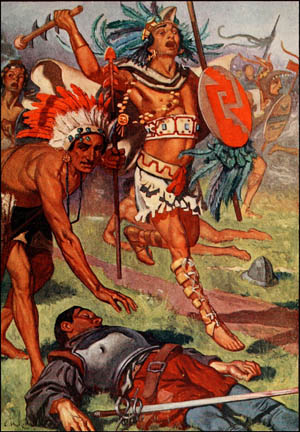 The Rise of the Aztec Civilization

By 1519, the Aztec civilization was highly advanced, but their expansion and prosperity was due in large part to the contributions of their predecessors.

The Aztecs encountered by the Spanish in 1519 possessed a highly advanced civilization, one of the most complex ever to develop in the New World. But in large part the Aztecs were indebted to earlier peoples for much of what they claimed as their own.

The city of Teotihuacan dominated the central part of Mexico Valley (the site of present-day Mexico City) from approximately ad 300 to 600 when it was overthrown and destroyed, but its ruins passed into legend and myth as the place where the gods had assembled to create the sun.
[text_ad]

A people called the Toltecs later ruled over much of central Mexico from their capital at Tollan. They developed a highly advanced civilization that ran from about 900 to 1100. According to Aztec myth, they were guided by the God Quetzalcoatl and discovered medicine, astronomy and the calendar.

The second Toltec ruler, Topiltzin, born in 935, became identified with Quetzalcoatl. He was driven out of Tollan, following a religious conflict, and fled with his followers to the Gulf Coast where he sailed away, promising to return. With the expulsion of Topiltzin, Tezcatlipoca replaced Quetzalcoatl as the chief god and introduced human sacrifice as part of his cult.

Toltec culture was militaristic as evidenced in their carvings for the insignia of the eagle and jaguar knights, two of the Aztec military orders. In spite of their military nature, the Toltec state collapsed around 1168. The capital was sacked and destroyed, possibly by barbarian tribes from the north. Toltec culture survived only in scattered cities such as Xico and Colhuacan. No central unifying political force remained in central Mexico.

Integrating The Last of the Barbarian Tribes

Barbarian tribes in the north, known collectively as the Chichimecs, established a number of small cities such as Azcapotzalco. Gradually, the rudimentary culture of the barbarians fused with the Toltecs as many of the former married into the noble families of the latter. The last of the barbarian tribes to enter the valley were the Nahuatl speaking Mexica, or Aztec, who gave their name to the country.

Aztec origins are obscured in myth and legend but they appear to have been a wandering tribe of a few thousand among the many groups of Chichimecs. Because they were the last to enter the valley, they were forced to eke out a living by squatting on the land of others. From 1250 to 1298 they were vassals of Azcapotzalco, capital of the Tepanec kingdom founded by Chichimecs like themselves. Then from 1298 to 1323 they lived under the lordship of the city of Colhuacan, one of the Toltec holdouts.

After sacrificing a Calhua princess, the Aztecs were forced to take refuge on a few small islands in the swamps of Lake Texcoco. This was a no man’s land between Azcapotzalco to the north, Texcoco to the east, and Colhuacan in the south. Geography saved the Aztecs from annihilation because none of these states were willing to risk war by occupying the islands.

So it was here that the Aztecs founded their town in the year Two-Reed, perhaps 1325, and called it the Place of The Prickly Pear Cactus: Tenochtitlan. Shortly after its establishment the Aztec town joined with the older Tlatelolco on an island a mile to the north. These towns had their first monarchs appointed by Colhuacan and Azcapotzalco respectively. Later the Aztecs were forced to pay tribute to, and fight as mercenaries for Azcapotzalco which had swallowed up its two rivals by 1415.

In 1426 the new ruler of the Tepanec kingdom turned against the island cities and had the rulers of Tenochtitlan and Tlatelolco murdered. Itzcoatl (1427-40), the new king of Tenochtitlan, responded by organizing an alliance of the lakeside cities as well as requesting aid from cities outside the valley. By 1428 he had destroyed the Tepanec kingdom.

The Aztecs gained their first territory on the mainland when the victorious cities of Tenochtitlan, Texcoco and Tlacopan formed a triple alliance, a coalition that was to dominate Mexican politics for the next century.

Nominally, the three cities were equal but Tenochtitlan soon asserted dominance. The Aztecs had learned that aggression pays and changed their entire social structure. The fairly egalitarian peasant-soldier structure gave way to a militarized hierarchy in the hands of a nobility.

Soon the triple alliance controlled the entire valley. Then it was not long before its leaders sought conquests beyond the valley walls. Montezuma I (1440-68) pursued an aggressive policy that soon forced communities all the way to the coast under tribute.

As the Aztecs became accustomed to the fruits of conquest, they evolved an ideology of themselves as a chosen people destined to conquer. But during the reign of Montezuma II, they were to come up against a people with a similar self image, the Spanish.