The M72 LAW & the RPG in the Vietnam War

World War II experiences led to more shoulder-fired anti-tank weapons such as the RPG and the M72 LAW, both widely used in the Vietnam War.

Among the most effective and feared weapons of the communist North Vietnamese Army and the Viet Cong insurgency during the Vietnam War was the rocket-propelled grenade, commonly known as the RPG. These were simple weapons originally designed and manufactured in the Soviet Union. The RPG-2 and the follow-on RPG-7 were perhaps the best-known types of these weapons that entered service in Vietnam. During the conflict, these RPG types were known as the B-40 and B-41.

A shoulder-fired anti-armor weapon, the RPG traces its roots to the latter years of World War II as the Soviets developed and tested its predecessor, the PG-70. The RPG-2 entered service in 1949 and was mass produced in the Soviet Union, both for use by the Red Army and for the export market. The weapon was also produced under license in other countries. The simplicity of the RPG-2 and its light weight of just under 10 pounds were attributes that made it ideal for squad level anti-tank operations.

The basic RPG consists of a 40mm tube and fires a high explosive anti-tank grenade such as the Soviet PG-2. Although it may be operated by a single soldier, it has most often been deployed with a two-man team. Firing involves the simple steps of cocking with the thumb, aiming, and then pulling the trigger. Once the grenade exits the tube, six stabilizer fins deploy, and the grenade is accurate up to about 160 yards with a maximum range of nearly 220 yards. 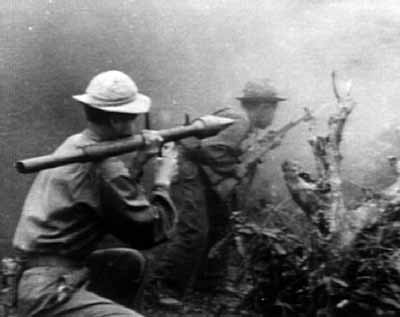 During the Vietnam War, U.S. and South Vietnamese forces regularly encountered the RPG. Particularly effective against the high-silhouetted M113 armored personnel carrier, as well as against tanks and low-flying helicopters and other aircraft, the RPG developed a formidable reputation and remains common around the world.

The United States military of the Vietnam era deployed its own version of the infantry squad level shoulder fired anti-tank weapon. Like the RPG, the M72 LAW (Light Anti-Tank Weapon) traces its lineage to the World War II era. The LAW was influenced first by the German panzerfaust and then the American M1 bazooka. The one-shot disposable LAW made its debut with the U.S. military in 1963 and remains in limited use.

The 66mm weapon consists of a high explosive anti-tank rocket or grenade placed inside a pair of tubes, one fitting within the other. In preparation for firing, the inner tube telescopes to the rear, and the operator acquires the target and pulls the trigger. The LAW weighs only 5.5 pounds, and its effective range is similar to that of the RPG at more than 150 yards and a maximum range of 220 yards. The projectile has been documented to penetrate nearly 10 inches of armor.

In Vietnam the LAW was once recalled due to malfunctions resulting in the warhead exploding while the rocket was in flight. It was reissued after safety modifications were completed. More recently, the LAW has been deployed to Iraq and Afghanistan where its light weight and low cost have made it ideal for urban combat or instances when enemy vehicles are encountered.

Since the Vietnam War, the LAW has been in service with the armed forces of more than 30 countries, including Israel, Egypt, Australia, South Korea, and Great Britain.