Game designer Johan Nagel explains that with Vietnam 65, winning the hearts and minds of the locals is essential for success.

No static occupations, no traditional front lines, and growing opposition from both the local population and citizens back home—for America, Vietnam was a very different kind of war.

So how would you go about simulating it on a PC?

That was the task of producer and game designer Johan Nagel when creating Vietnam 65, released today by Slitherine Group. And like the conflict on which it’s based, it isn’t your typical wargame.
[text_ad]

Hearts and Minds Win The Day 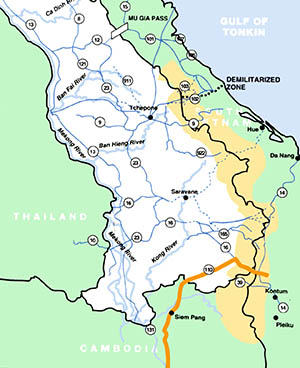 “What I tried to capture in [Vietnam 65] was the essence of the war condensed into a few hours,” Nagel said. He explained that the intent was to “give the player a sense of the Vietnam War, both the counter-insurgency and the conventional dimensions.”

On the side of traditional warfare, players are responsible for coordinating the efforts of various American units across the map: ground troops, special forces, artillery and air supply drops, to name a few. A key element of the game is keeping your units supplied; those that aren’t become ineffective rather quickly.

Regarding combat, there are many opportunities to engage with the enemy, but players soon learn that there’s more to Vietnam 65 than simple search-and-destroy; body counts don’t win the game here. Instead, Nagel and his team have placed a much greater emphasis on winning the hearts and minds of the local population. In a war of insurgency, intelligence is imperative; players must establish and maintain relationships with the locals to locate the enemy.

Much of the action occurs on or around the Ho Chi Minh Trail, the major South Vietnam supply route. But curiously, the trail doesn’t run vertically in the game. Nagel explained that this change allowed for a better simulation of the fighting than a more traditional “north-is-up” model.

“With the trail running horizontally through the map,” he said, “the counter-insurgency aspect of the game is alive and was a much better representation of the fluidity of the conflict.”

Coordinating troop movements, supply routes and public relations with both the locals and the folks back home is quite a lot to put into one game, but Nagel’s team had an abundance of prior experience to guide them: the first iteration of Vietnam 65 came out twenty years ago.

“Over the years and different platforms, the game has developed a long way, the most important milestones or developments being the Ho Chi Minh trail traversing the map horizontally and the introduction of Political Support,” Nagel said. “By introducing Political Support, the game closed the circle as now the hearts and minds of both populations—Vietnamese and American—became center stage, once again a better representation and a better gaming experience.”

The subject matter also happened to be right up Nagel’s alley.

“I have been wargaming (board and electronic) since the early 80s, and became very interested in the Vietnam War early on,” Nagel said. “As for the 1st Air Cavalry, I have followed this unit and its history still to this day, and even have a tattoo of the unit badge on my left arm,” he joked, “so yes I am passionate!”

Vietnam 65 is currently available on Steam.