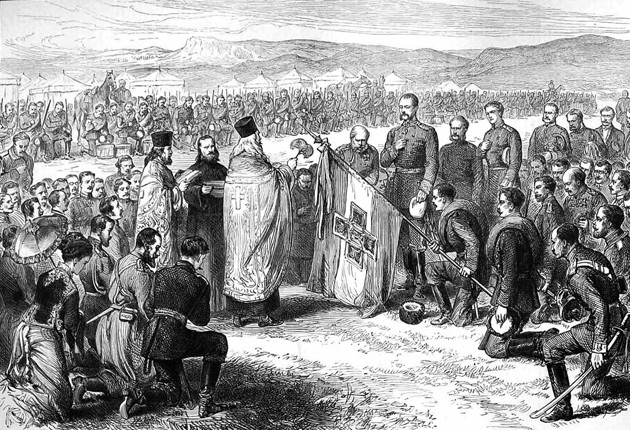 The volunteers of the Bulgarian Legion would fight under General Joseph Gourko in the Russo-Turkish War.

Anticipating the inevitable war with the Ottoman Empire, the Russian government approved creation of a military formation recruited from native Bulgarian volunteers. The Bulgarian Legion was born, with six battalions grouped into three brigades of two battalions each. Maj. Gen. Nikolai Stoletov, an officer from the Russian general staff, was appointed as the commander of the Bulgarian Legion.
[text_ad]

A training depot for volunteers of the Bulgarian Legion was established in Kishenyov (modern-day Chisenau, capital of Moldova). The core of the new force became 700 Bulgarian volunteers, almost all of them veterans of the recent war in Serbia and rebellion in Bulgaria. More than 300 officers and NCOs, some of Bulgarian extraction, were seconded from the Russian Army to create the cadre of the Legion. Once the war began, the training depot was moved to Ploesti, Romania. Another 4,300 Bulgarian recruits reported there for training.

During its stay in Ploesti, the Legion received its flag, presented by a delegation from the Russian city of Samara. The soon-to-be-famous Samara Flag, hand-sewn by nuns from Iversk Women’s Monastery in Samara, consisted of three broad horizontal bars, red over white over blue. On the obverse, the flag featured a flag cross with the image of the Iversk Icon of the Mother of God. In the reverse side were images of Saints Cyril and Methodius, creators of the old Slavonic (Cyrillic) alphabet.

During a lavish ceremony attended by the Russian czar, the flag was presented to the Legion, and the 3rd Battalion was specifically entrusted with its safekeeping. The battalion’s commander, Captain Pavel Kalinin, swore that he would rather die than see the flag fall to the enemy.

After crossing from Romania into Bulgaria, Stoletov insisted that his command be given an active combat role. From mid-June 1877, the Bulgarian Legion was assigned to Maj. Gen. Joseph Gourko’s vanguard and was widely cheered by the Bulgarian population. Even though it had several minor brushes with Turkish forces, the first test of arms for the new formation came at the Battle of Stara Zagora. Although the Bulgarian Legion was pushed off the field by superior numbers, it gave a good accounting of itself and won respect from its Russian counterparts.

The three Bulgarian battalions present during the battle suffered over 500 casualties, testifying to the ferocity of the fighting. Kalinin’s impassionate oath came true. After three flag-bearer NCOs were killed in succession, Kalinin picked up the flag. He was soon shot off his horse as well, dying on the field of battle.

During the fighting at Shipka Pass, the Bulgarian militiamen also conducted themselves admiringly, standing shoulder-to-shoulder with Russian regulars. Their bravery under fire and stoic endurance in the face of suffering won them wide praise from their Russian officers.

After the war, the original Bulgarian Legion was increased to a full combat division, eventually becoming the core of the Bulgarian Territorial Army. The Samara Flag is considered one of Bulgaria’s national treasures.