George A. Custer’s “Last Stand” at the Battle of Little Bighorn

During the Battle of the Little Bighorn, June 25-26, 1876, troopers of the U.S. 7th Cavalry Regiment under the command of Lieutenant Colonel George A. Read more

Despite roughly 50,000 casualties reported on both sides during the Battle of Gettysburg, there was only one reported civilian casualty: Mary Wade, a seamstress, was hit by a stray bullet while making bread in her kitchen. Read more

Richard Gatling was born in Hertford County, NC, on December 12, 1818. His father was a prosperous farmer and inventor, and the son was destined to inherit the “invention bug.” Read more

Confederate General J.E.B. Stuart: The Death of a Legend 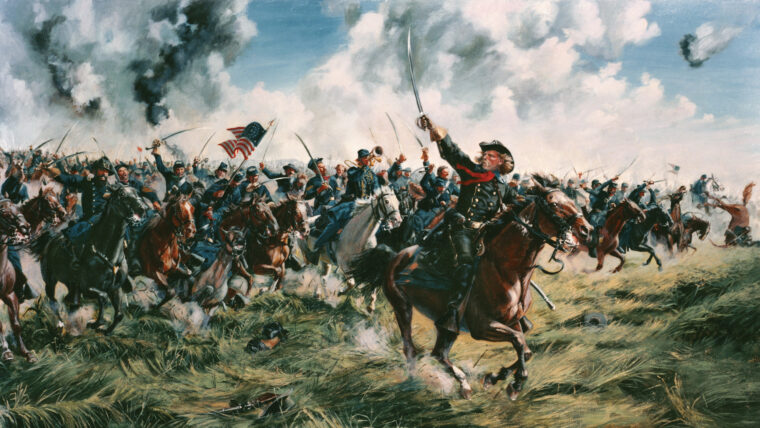 “Keep to your Sabers, Men”: J.E.B. Stuart’s Charge at Gettysburg

An angry gloom hung like dust over the 6,000 Confederate cavalrymen trooping up the York Turnpike in the early dawn of July 3, 1863. Read more

Phil Sheridan had a bad feeling. The bantam-sized Union general always trusted his instincts, and now, in mid-October 1864, those instincts were telling him that trouble was brewing back at the front, where his Army of the Shenandoah was encamped near Cedar Creek, Virginia, resting and relaxing after a busy few weeks burning civilian farms and slaughtering thousands of head of livestock from Staunton north to Woodstock. Read more

Massacre on the Washita

The conclusion of the Civil War saw the painfully reunited nation resume its westward surge. Complicating that surge was the Indian question: how best to remove the Native American peoples from the paths of white expansion. Read more

Could Custer have been saved at Little Bighorn?

We can never know what frantic thoughts raced through George Armstrong Custer’s mind in the last hour of his life. Read more

Around 8 o’clock on the morning of June 17, 1876, Brig. Gen. George Crook ordered his troops to halt along the banks of Rosebud Creek. Read more

The young captain of engineers who discovered the dangerous bulge in the “Mule Shoe” salient at Spotsylvania, Ranald Slidell Mackenzie, would go on to make a name for himself during the Civil War and the subsequent Indian campaigns out West. Read more

Ned Wynkoop and the Explosion on Pawnee Fork

In 1856 a young Philadelphian named Edward W. Wynkoop—Ned to his friends—migrated to Kansas to find his fortune. Read more