The División Española de Voluntarios, or Spanish Blue Division, fought alongside the Germans on the Eastern Front.

To their Russian enemies they were the “Spanish mercenaries of Hitler’s Fascist lackey, Franco.” To Hitler himself, “One can’t imagine more fearless fellows. They scarcely take cover. They flout death.” Officially the 250th Infantry Division of the Wehrmacht, it was commonly called the Division Azul, or the Spanish Blue Division, after the color of Spain’s Falangist (Fascist) Party. As Spain was neither combatant nor conquered, the volunteers who fought in it were probably World War II’s most purely ideologically motivated soldiers. 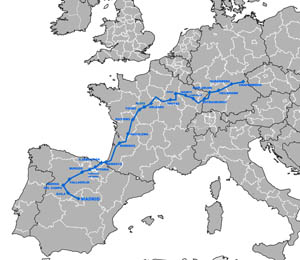 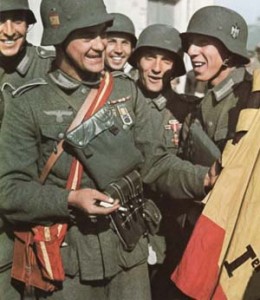 To reach the front, the Spanish Blue Division made the longest sustained marching effort of World War II—45 days. From August 29 to October 9, 1941, they trudged from Sulvaki, Poland, to Vitebsk, Russia, almost 625 miles, in a column stretching 20 miles, each man lugging 70 pounds of equipment. The division saw its first action just 24 hours after being moved into the line and would soon be engulfed in a military maelstrom.

The Spaniards were shocked by the horrors of war in the East. One soldier of the Spanish Blue Division saw a comrade impaled to the ground by an incoming Russian shell. Spaniards who retook positions previously abandoned to the Germans found wounded they had left behind with their chests torn open with picks. In turn, volunteers from Spain’s vicious version of the French Foreign Legion sliced off the ears, noses and fingers of Russian prisoners, then sent them stumbling back to their lines.