Riflemen of the 95th Regiment

The 95th Regiment of Foot was a new formation in 1808. The regiment was an outgrowth of the hard-won lessons learned during the American Revolution.

The 95th Regiment of Foot was a new formation in 1808, having originated with the experimental Corps of Riflemen raised in 1800. The regiment was an outgrowth of the hard-won lessons learned during the American Revolution, when American riflemen used natural cover and well-aimed shots to decimate British formations. The British already had light infantry, but they were still dressed in red and carried smoothbore muskets. The riflemen were something new, dressed in green to blend in with their surroundings and make less obvious targets. They were armed with the Baker rifle, which was a much more accurate weapon than the standard “Brown Bess” musket of the day.
[text_ad]

The weapon was adopted by the Board of Ordnance after extensive trials. It was a flintlock weapon, and it had a .62-caliber bore, smaller than the standard musket. Above all, it was the rifling that made the Baker so accurate. 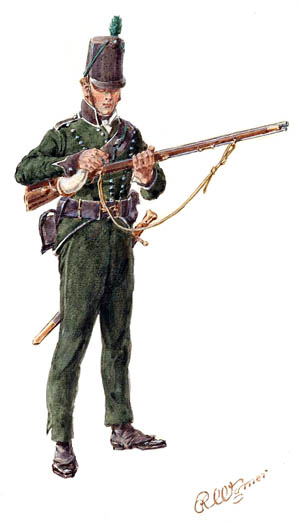 There was seven-groove rifling with a twist of a quarter-turn along its 301/2-inch barrel. The rifling grooves gave the bullet a spin, contributing to the overall effectiveness of the weapon. The Baker could achieve wonders, at least by early- 19th-century standards. The average smoothbore musket was only reasonably accurate at close range—perhaps 50 to 100 yards. It was said that if a man stood 200 yards from a smoothbore musket, he would be perfectly safe. By contrast, the Baker’s effective range was somewhere between 200 and 300 yards.

The 95th was an elite regiment, where the men had a real sense of pride in their marksmanship. They held target practice often; a common if unauthorized game was to shoot playing cards from the hands of comrades from 150 yards away. Riflemen were used to skirmish well ahead of the main formations, neutralizing French light infantry and generally harassing the enemy with their aimed shots. The rank-and-file redcoat was often an automaton, firing massed volleys by rote command. By contrast, the rifleman was trained to show some initiative and independent thought.

Soldiers of the 95th generally fought in pairs, a far cry from the massed ranks of their red-coated comrades. Each rifle company was divided into two equal platoons, and divided again into half platoons. Each half platoon featured a “chosen man,” who was picked for his merits and accomplishments as a soldier. A white stripe was worn on the right sleeve to show the distinction. If there was no NCO present, a chosen man would lead.
The 95th was a special regiment, but most rankers were from the lower classes. Benjamin Harris was a shepherd who traded mutton for marksmanship while still a young man. He learned the cobbler’s trade, and during the retreat was often asked to repair officers’ boots. Owing in part to General Sir John Moore’s influence, flogging was discouraged in the Rifles, but when discipline broke down during the retreat, General Robert Craufurd liberally applied the lash. It is interesting to note that Harris, who generally hated flogging, applauded Craufurd’s punishments, saying that in the long run it saved lives.

Rifleman Thomas Plunkett, a devil-may-care, roistering Irishman, was in some respects typical of the regiment and of the British Army as a whole. He was a crack shot, courageous and resourceful, and a good, reliable companion when sober. But he was also fond of the bottle, and when drunk he became a Jekyll-and-Hyde personality, filled with murderous rage.

It was during the retreat that Plunkett performed the most celebrated action of the campaign—killing a French general at extreme long range. It took place at the village of Ciob, near a stone bridge that spanned the Cua River. The British rear guard clashed with General Auguste Colbert’s 15th Chasseurs au Cheval and 3rd Hussars. Colbert placed his men in a column of fours and galloped toward the bridge, himself well in the lead. Plunkett saw the general’s gaudy uniform from afar and decided to try his luck. The rifleman left his comrades and ran forward alone. When he judged he was at the right spot, he flung himself down on the ground, lying on his back in the mud and snow. He placed his rifle lengthwise on his body, the muzzle of his weapon cradled between his feet, butt couched under his right arm. 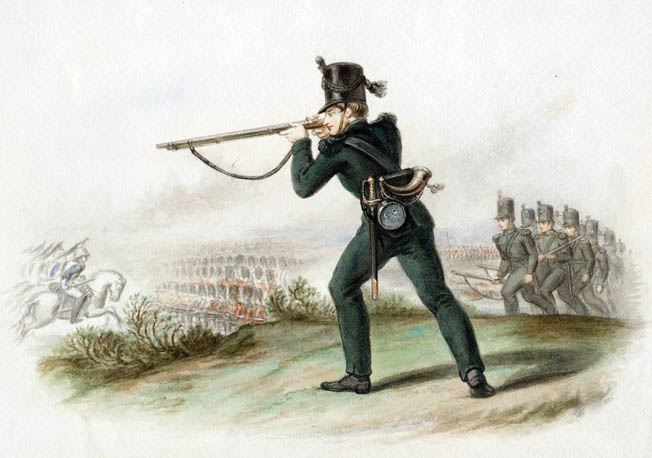 This was a standard firing position for the rifles, and Plunkett was a deadly shot. The Irishman fired, killing Colbert instantly. As the dead cavalier slumped in the saddle, his trumpet major rushed to his side. Plunkett reloaded and fired again, killing the unfortunate trumpeter and proving that his first shot was not just a lucky incident. Controversy surrounds Plunkett’s shots. Some commentators insist the range was a well-nigh-impossible 800 yards. It was probably more like 200-300 yards, but shorting the range does not lessen Plunkett’s amazing feat of arms.

The 95th Foot served through the entire Napoleonic wars, often in the thick of battle as skirmishers, scouts, or assault troops against enemy fortresses. The regiment has gained new popularity thanks to Bernard Cornwell’s popular series of novels detailing the adventures of Rifleman Richard Sharpe. These novels, which paint a generally accurate picture of the period, have also been filmed in a series of made-for-television movies with Sean Bean starring as the redoubtable Mr. Sharpe.