Adolf Hitler remains the personification of evil. But who was the man behind the persona? The new WHN Adolf Hitler Special Issue gives the answers.

Nearly three-quarters of a century distant from the end of World War II and the defeat of Nazi Germany, one may conclude with confidence that few images of mankind’s violent history stir greater revulsion and, yes, lingering fear than that of a glowering Adolf Hitler—steely eyes gazing outward from a page or the glow of a computer screen.

Although other despots have come and gone—Genghis Khan, Stalin, Mao, Pol Pot—to name a few, it is Hitler who likely stands second only to Lucifer himself in the pantheon of evildoers. Even Judas Iscariot may elicit some empathy, and the Rolling Stones voiced a plea of “Sympathy for the Devil.” Unlike Lucifer, however, Hitler was born a man. The only compassionate chord that resonates for the Nazi Führer, murderer of millions, is from that far-right Fascist and Neo-Nazi corner of the political spectrum that survives today and is, in itself, enough to turn the collective stomach of the majority of the civilized world.

Historians, psychiatrists, observers, and even those who knew the Nazi dictator have endeavored to rationalize or explain the mind of the madman. Their search and exhaustive analysis will likely never achieve a consensus, but each of them has engaged in an attempt to answer the haunting question. Why?

What was it that motivated Adolf Hitler to rise to power first as the leader of the Nazi Party and then as the Führer of Germany? Was it a primal lust for power? A consuming hatred of Jewry, non-Aryans, and political opponents whatever their stripe? A redress of the harsh terms of the Treaty of Versailles and the recovery of German honor and respect among nations? Quite probably, the answer lies in a strange brew of these and other factors. 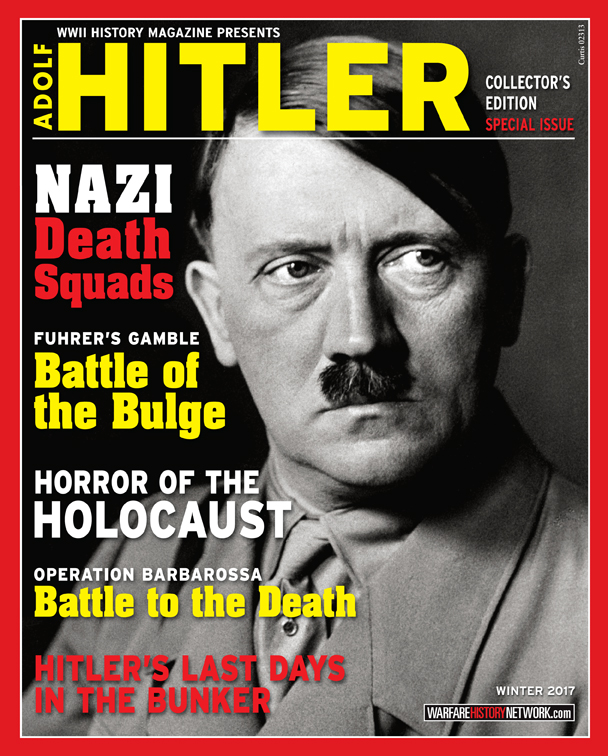 While the specter of Adolf Hitler haunts us today, still capable of disturbing our sleep or conjuring images of inhumanity so horrible that we look quickly away, the Führer fascinates.

Frankly, the idea of publishing a “special issue” centered on the life and legacy of Adolf Hitler generated substantial controversy in our editorial discussions. Herein the reader will find an informative and enlightening overview of Hitler, his warped and twisted entourage, and those who chose to do his bidding along with the havoc, mayhem, death, and destruction they unleashed upon the world. Our goal here is to inform and allow readers to draw their own conclusions as we step out and offer an issue of WWII History that has been under consideration for quite a while.

Perhaps our strongest motivation is to remind ourselves and others that we must never forget that men are capable of inflicting unthinkable evil and suffering upon one another—simply because others do nothing to stop it. The lesson of Hitler, his Nazi cronies, the 12 years of the Third Reich, and the upheaval that their world war spawned is quite clear. Never again.

As philosopher and author George Santayana warned: “Those who cannot remember the past are condemned to repeat it.”

It is good that Hitler and the Nazis continue to unnerve us as they do.