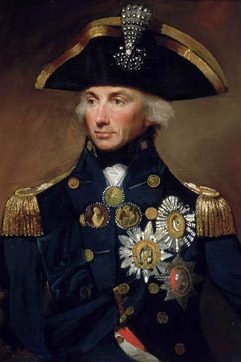 Horatio Nelson's decision to abandon his wife for Lady Hamilton has always tarnished his glory, but few others have ever sparked such admiration from the British people.

Days before the impending Battle of Trafalgar, a sailor on Horatio Nelson’s flagship Victory was so busy ensuring that each man’s letters home were secured for dispatch on a vessel bound for England that he forgot until after the ship had sailed that he hadn’t included his own. Hearing of it, Admiral Nelson had a signal hoisted to call the courier ship back so the sailor’s letter could be included.

About the same time, superiors in London ordered Nelson to send back a fellow admiral to England for a questionable court-martial. Nelson, realizing the man would feel disgraced if returned in a frigate rather than his own larger ship of the line, allowed him to sail home in it rather than retaining the three-decker for his own imperiled fleet.
[text_ad]

Product of an Up-Country Parson’s Family

These are but a few examples of the character of this small man, product of an up-country parson’s family. Over the last two centuries, with the exception perhaps of Winston Churchill, no one has so sparked the admiration and love of the British people. Like Churchill’s, Nelson’s funeral was partly staged on the River Thames, the Royal Navy at places of honor and the banks lined with citizens of a grateful nation. Such an honor is befitting the two men who, 150 years apart, thwarted invasion by a menacing continental foe by retaining sea superiority in the English Channel.

Nelson, of course, is less revered in the United States than in Britain, perhaps because his Royal Navy so plagued the young country in 1776-1781 and again in 1812-1814. Still, he was an exceptional person. He was flawed, to be sure, but ingenious, a brilliant strategist and tactician, and exceptionally likable.

If the word “genius” is to be applied to a military man, he must possess certain qualities, including the blessings of luck. Nelson had them aplenty. He was thoroughly trained in seamanship, having set to sea at age 12. He was bright and picked up his craft quickly. By age 20 he was a captain.

He studied past battles and determined how to wage them better. He saw how Britain’s determination to “go by the book” ruined her chances for victory against the French fleet off Yorktown in 1781 and consequently lost her the American colonies. Thereafter, a certain measure of insubordination and “going against the book” were Nelsonian trademarks.

As an admiral, he was willing to risk all, as he did at Aboukir Bay, Copenhagen, and Trafalgar on untried tactics. But he and his captains worked in extraordinary harmony.

A Keen Sense of Duty

He was unquestionably brave. He always led his men in attack and never put himself in a position of protection, hence the loss of an eye and an arm. Indeed, he led the way at Trafalgar and paced the deck defying fire despite the fact that as admiral he really had nothing to do once the ships were engaged. His death by musket ball was the result. He lived by his code of duty. Time and again he put his personal needs aside to serve his country.

All of this would have been enough to ensure him a place in the pantheon of military luminaries. But he also felt a keen affinity for those who served with him. They returned his affection. Of course, this aided his path to victory; the sailors and captains who served with him were eager to go where he led and fought, for Nelson personally, if for no other reason.

His great flaw, the abandonment of his wife for Lady Hamilton, has always tarnished his glory, but even this may have stemmed from his bravery. The head wound he sustained at Aboukir Bay may have damaged his brain’s frontal lobes, leading to a loss of judgment and inhibitions. His affair began as Emma Hamilton tended the wound.
Brilliant, brave, killed at the height of a crowning victory, flawed, intriguing. Well might Britain still revere her little admiral, who, like Elizabeth and Churchill, faced down invasion and won.