Germany operated surface auxiliary cruisers, sometimes termed commerce raiders, in both world wars. The defeat of France in June 1940 opened Atlantic Ocean ports to the Germans for the first time, greatly facilitating access to the high seas by such raiders.
[text_ad]

These commerce raiders had three missions: (1) to upset enemy merchant shipping schedules, (2) to scatter British naval forces attempting to locate and sink them, and (3) to destroy enemy merchant ships, wherever they might be found. If possible, merchant vessels carrying valuable cargoes were taken into custody by prize crews and sailed back to Germany, or sometimes to her ally Japan.

All 11 German auxiliary cruisers active in World War II were converted merchant ships pressed into service by the Kriegsmarine. They were painted in drab colors of gray, brown, or black, without any relief by white striping, in order to avoid detection at night. Their deception was to play the role of an innocent merchant ship plodding the sea lanes under whatever flag was most appropriate at the time.

Other than perhaps a raked bow suggesting speed capability above the ordinary, the raiders displayed no outward characteristic that signified their differences from any of hundreds of British or neutral merchant vessels sailing the high seas. But most German auxiliary cruisers were formidable warships. Behind concealing hinged steel ports, up to eight 5.9-inch guns were mounted. These were capable of firing within six seconds after being ordered to do so. Two to four torpedo tubes were situated on deck and below the waterline. Varying arrays of 37mm and 20mm guns were mounted for short-range attacks or antiaircraft purposes.

Disguises or screens topside hid these lighter guns and other combat equipment such as searchlights, range finders, and smoke generators. Holds of the commerce raiders were modified to house crews’ quarters, mine rooms, aircraft storage, ammunition magazines, reefers, auxiliary power supplies, fuel bunkers, prisoners’ quarters, or dry-stores compartments. Most raiders carried one or two seaplanes, primarily for scouting purposes. These were stored disassembled in a hold, assembled on deck, and placed overboard via crane, only in calm seas. No catapults were mounted topside, since it was too difficult to disguise their offensive nature.

Chameleons Of the Sea

German auxiliary cruisers were manned by crews of up to 407 men, who were expected to live onboard for as long as one year. Out of necessity, these crews became versatile and innovative. Most raiders developed the ability to change their identity and appearance while at sea via false masts, stacks, or superstructures. They were frequently painted different colors, and sophisticated disguises became commonplace. Because most voyages involved independent steaming with little logistical support, raiders sometimes sailed in remote midocean locations while the crews cleaned and painted their hulls. Trained divers worked on underwater repairs, while needed but missing spare parts were fabricated in the onboard machine shop.

During World War I, German commerce raiders relied partially on logistical support established in neutral countries. But in World War II, from 1940 until the last raider was sunk in 1943, they were supported solely by tankers and supply vessels sent out from Axis-controlled ports. 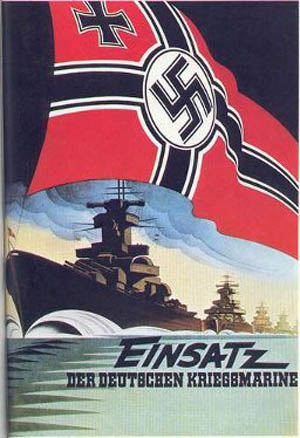 German auxiliary cruisers were distinguishable from their counterparts, the Royal Navy’s armed merchant cruisers, in two respects. First, all 27 such German ships in WWI and WWII fought as destroyers of enemy commerce, without thought by their crews of personal gain. In contrast, crews of the Royal Navy’s armed merchant cruisers viewed themselves as defensive protectors of trade. They sometimes shared in prize money awarded for their successes, although these funds were normally also distributed to other Royal Navy personnel who helped intercept the enemy.

Second, British armed merchant cruisers were tasked to protect lines of communication by intercepting their German counterparts en route to or from their operational areas. In contrast, German auxiliary cruisers had as their primary mission to sink or capture enemy merchant ships. Normally, they took aboard as prisoners the crew members of merchant ships they sank and later transferred them to German supply vessels they met with secretly at sea for reprovisioning.

German merchant raiders of World War II were originally identified as Handels-schutzkreuzer, or HSK (Trade Protection Cruisers). That appellation was later changed to Hilfskreuzer or HK (Auxiliary Cruisers). They were initially identified by numbers 1 to 8, prefixed by the letters HSK. Later, they were assigned a two-digit administrative number preceded by the word Schiff (ship).

Kormoran was originally operated by the Hamburg-America Line as the merchant ship Steiermark, built by Friedrich Krupp Germania Werft at Kiel in 1938. She was taken over by the Kriegsmarine in 1940 and converted into an auxiliary cruiser at Deutsche Werft in Hamburg. Kormoran entered military service on October 9, 1940.