As Allied bombs rained down from B-17s and B-24s on their own men to open Operation Cobra, a three-star general was visiting the front lines: Commander of Army Ground Forces Lt. Gen. Lesley McNair. He would gain the dubious distinction of being the highest ranking American soldier killed in combat in World War II.

McNair had a long and distinguished career in the Army. In World War I, he served on the staff of the U.S. 1st Division and later in General Headquarters, Allied Expeditionary Force. In the interwar years he commanded the Command and General Staff School. At the outbreak of World War II he commanded the Army Ground Forces, responsible for training the American Army. He established a new and rigorous system under which units experienced conditions close to actual combat. McNair was responsible for the entire cycle: activation, training and evaluation of all new divisions. 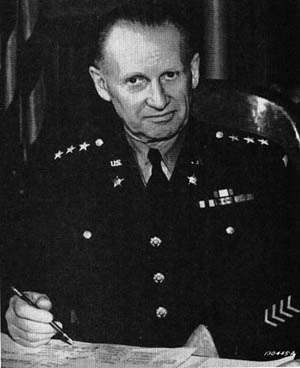 As Allied forces began building up in England for the invasion of Europe, McNair was considered for army group command, but he had one setback that was kept secret throughout the war: Leslie McNair was deaf. Instead, he took over command of the fictitious First Army Group, a fake army that Lt. Gen. George S. Patton had been commanding to make the Germans think Allied forces in Normandy were only a diversion to a larger invasion in Pas-de-Calais.

Lesley McNair’s Body was Hurled 80 Feet in the Air

To increase the deception, and to see if his training methods were effective, McNair visited the front, in hopes of being reported on the continent by the German high command. He was visiting the troops of the 30th Infantry Division when the Allies started dropping bombs on the German front. But soon the bombs began falling short and exploding within the American lines. McNair’s body was hurled 80 feet in the air from a slit trench. Medics would not have been able to identify him were it not for the three stars they found on one shoulder.

Although only one of a hundred Americans killed in the attack, McNair was given a funeral in accordance with his rank. The only attendees, however, were Lt. Gen. Omar Bradley, the First Army commander, Lt. Gen. Courtney Hodges, who would soon take over First Army, Maj. Gen. Elwood Quesada, IX Tactical Air commander, Maj. Gen. Ralph Royce, XII Tactical Air commander, McNair’s aide-de-camp and Patton. No band played and no shots were fired in salute. His death was kept secret to fool the Germans. Patton recorded in his diary that night a simple epitaph: “He was a great friend.” (Get the full story on the leaders and commanders who shaped the Second World War by subscribing to WWII History magazine.)