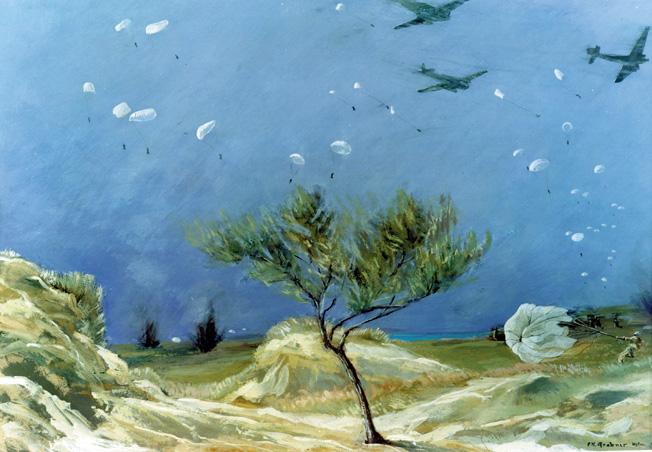 Fallschirmjagers, or those in the elite German paratrooper corps, were some of the finest fighting units of World War II.

Between 1940 and 1945, the outstanding fighting spirit and courage of the elite German paratroop forces earned the admiration of friend and foe alike. Daring, aggressive, and superbly led, these troops would regularly fight independent actions against numerically superior adversaries in some of the fiercest battles of the war.
[text_ad]

Established in 1938 by General Kurt Student, the paratrooper force, or Fallschirmjager, initially struggled to find an identity. The possibility of troops entering battle from the skies was a concept that found little enthusiasm within the conservative German military.

Undaunted, Student pushed ahead with his dream of a parachute force made up of troops whose military standard and morale far exceeded those of ordinary fighting units. The type of warfare envisaged by Student would require men who were as tough as “Krupp steel,” supremely fit, and self-reliant. For, as one officer recalled, “Fundamentally, [a paratrooper] starts fighting in a situation which most infantrymen would regard as hopeless, for he ventures voluntarily … into total encirclement.”

Only volunteers were accepted, with most of these coming from the Hitler Youth and Nazi Labor Service. All recruits, regardless of rank, were subjected to a grueling three-month course involving intense infantry, demolition, and parachute training. No exceptions were made for anyone. Student wanted only those with the “right stuff,” and his exacting selection criteria saw only one man in four make the grade.

Each Man Carried Field Dressings, Rations, Benzedrine Tablets, a 9mm Automatic Pistol, a Knife, and Grenades During the Descent.

Constant training and indoctrination fostered an esprit de corps that instilled fierce loyalty, high morale, and an aggressive self- confidence in the men, deemed the “parachutist’s spirit.” The troopers were proud to display the golden plunging eagle badge of the parachute forces on their uniforms and believed themselves to be superior to any other soldiers.

In battle, the Fallschirmjager, whose average age was only 18, wore a distinctive rimless helmet and long blue-gray smock over their webbing to avoid tangling equipment on the static line inside the aircraft. The men were transported to their drop zones aboard an 18-man, three-engine Junkers 52/3M transport or in the DFS 230 glider, which could carry nine fully equipped troopers.

The standard parachute was a half-globe design that opened automatically via the static line hooked on a cable in the aircraft. These parachutes did not have shroud lines and were difficult to guide. So, to drop accurately and avoid scattering, operations were to be conducted at no more than 400 feet in winds less than 14 mph.

Each man carried field dressings, rations, Benzedrine tablets, a 9mm automatic pistol, a knife, and grenades during the descent. One man in four carried a machine pistol. Supplies, rifles, and other heavy weapons would descend alongside the men in canisters fitted with special smoke markers for quick recovery and distribution.

Fire and movement coupled with an eagerness to close with the enemy were the hallmarks of the paratrooper. In battle, their mere presence commanded instant respect from their enemies. General Sir John Hackett, an airborne officer himself who had fought against the paratroopers at Monte Cassino and Arnhem, found them to be the most fiercely determined German soldiers he ever encountered; many others regarded them as the finest light infantry in military history.