As a dive-bomber pilot from the Essex, Lieutenant John D. Bridgers participated in the action against Kurita in the Sibuyan Sea. The following account of his attack, which he included on his Web site, describes Bridgers diving against one of the Japanese ships.

“We proceeded, with the Skipper’s division slightly ahead of us and off to the starboard, when suddenly the enemy announced its presence with a large spread of variously colored bursts of anti-aircraft fire, coming up through the clouds and mostly clustered around the lead planes.

“Cdr. Mini radioed that he was preparing to attack a battleship directly ahead, and he directed me to turn east and concentrate on another battle-wagon, which he promised I would see as soon as I reached the edge of the cloudbank I was over. He took a division of torpedo planes with him and sent the other with me.

“His prediction came to pass, and suddenly from beneath the clouds steamed a dreadnaught [sic] of vast proportions—the largest I had ever seen. In practice we had carried out dummy dives on sundry of our own battleships, including the newer ones of the North Carolina-class, which indeed, were huge vessels; but these were surpassed by the ship on which we were committed on this day. Compared to the sleek lines yielded by the clipper bows of our newer battleships, this one looked like a gigantic bathtub pointed in front.

“Mounting upward came multiple streams of tracer fire, and the deck blossomed with muzzle-blasts from larger AA guns, presumably the sources of the clusters of colored bursts of smoke in the sky around—all of which were augmented by similar fire from her screening vessels. I radioed that we were starting our high-speed approach so that the torpedo leader would know to start his let-down to sea-level.

“We entered a power-glide down to 12,000 feet. It was every man for himself and I suddenly had my hands full. The anti-aircraft fire, evidenced by tracers and puffs, was coming from all quarters, from ships large and small. During my dive I saw the main battery of heavy guns on the battle-wagon I had targeted train toward what I assumed were our torpedo planes coming in low on either bow. When they fired the ship literally disappeared in a cloud of smoke illuminated by an internal blossom of flame. 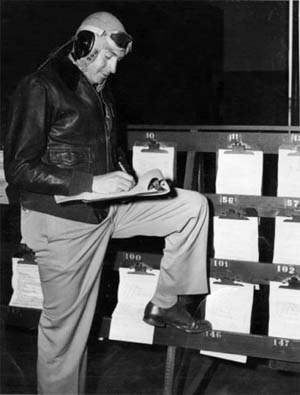 “I released my bomb at 2500 feet as usual but with a sense of fruitlessness, knowing my aim was guess-work at best. I broke my dive, closed my dive-flaps, and in a full-power glide headed for low altitude just above the water, which we always thought was the safest place in a totally hostile environment.”

Lieutenant Commander James F. Rigg braved many dangers flying his fighter aircraft into battle. When he thought of what his fellow aviators in dive-bombers and torpedo planes experienced, however, he felt fortunate to sit in his Hellcat. He explained his thoughts in a 1945 Liberty magazine article by Morris Markey, “Air Group 15 of the United States Ship Essex”.

“I’d rather fight five battles in the air than make one strafing run. It’s not too bad up there in the air, because you know you’ve got a tougher plane and you think you know your business better than those little guys. But when you’re boring down into a target, you can’t maneuver, because you’ve got to hold a steady course and get your tracers in. That’s the only way you have to aim your rockets. And that orange-colored stuff is pouring up at you from a man sitting solidly behind an anchored twenty-millimeter gun. He hasn’t got to fly an airplane and press his triggers at the same time. We [fighter pilots] get that sort of thing some of the time. The bombers get it all the time. I don’t envy them.”