The Poor Knights of Christ and the Temple of Solomon, also known as the Order of the Temple, was the first religious military order of the Latin Church. The order was founded in 1119, during the reign of King Baldwin II of Jerusalem. A Knight Templar performed a dual role as both an austere monk and a well-trained knight. On the battlefield, these highly disciplined warriors were renowned for their shock charge.

The Templars’ initial mission was to protect pilgrims on the road from Jaffa to Jerusalem. Throughout the 12th century, they amassed considerable resources and attracted many recruits. Their broader mandate included garrisoning castles and furnishing troops for crusader armies. In so doing, they became an integral part of the defensive infrastructure of the Outremer. They eventually controlled about 50 castles and strongpoints in the Holy Land. 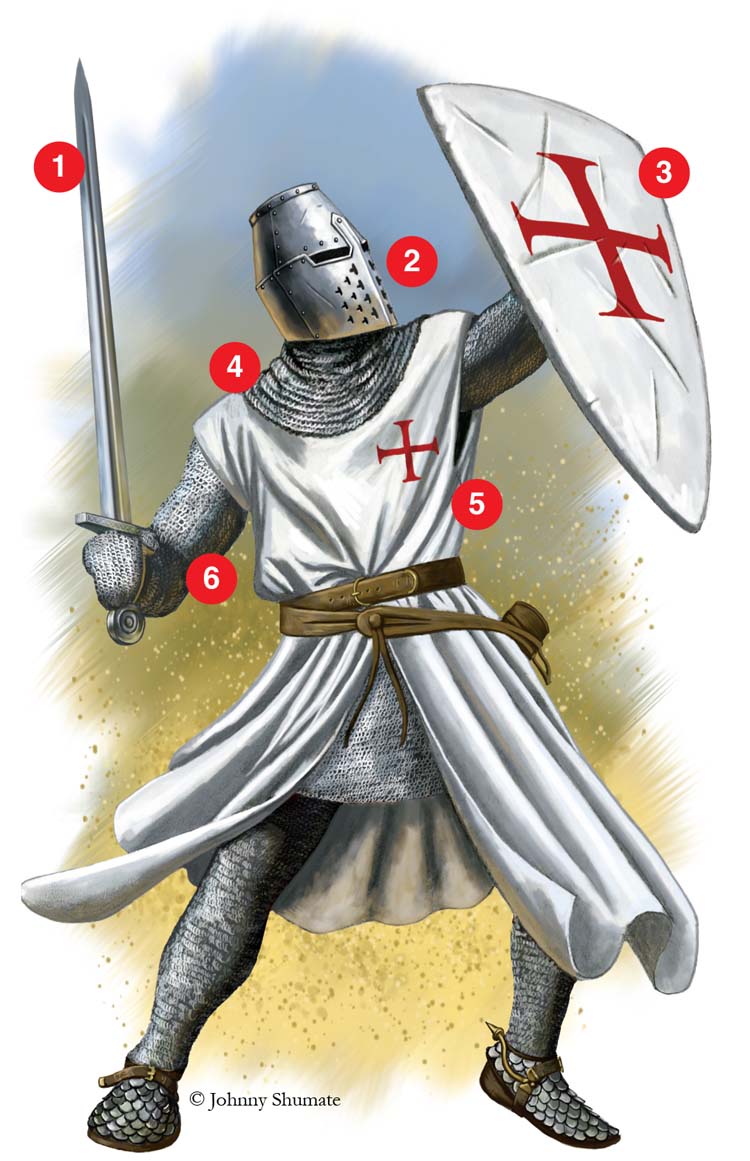 1. Sword: A crusader’s sword was double-edged and broad-shaped with a rounded point. It was about 38 inches long and intended for slashing and cutting rather than thrusting. It had a simple cross-guard and pommel. They were well suited for hand-to-hand combat and effective against the mail armor of the period.

2. Barrel Helm: His helmet is an evolution from the conical type with a nasal guard to this so-called barrel helm type. Helmets were not only for protection, but also projected power and prestige.

3. Kite-shaped Shield: He is equipped with a large, almond-shaped kite shield that is made of wood and covered in painted leather.

4. Mail Coif: From the middle of the 13th century on, the mail coif was no longer attached to the mail shirt but was worn as a separate defense.

5. Surcoat: From the middle of the 12th century, knights wore a long textile garment over their mail armor that was known as a surcoat. It was a loose, sleeveless garment with a deeply slit skirt that reached to mid-thigh. In the Holy Land it is believed that their use stemmed from a desire to copy the fashion of the crusaders’ Muslim enemies and also helped keep the desert sun from heating the chain mail underneath. The surcoat was rare until about 1310. Surcoats did not display heraldry identifying the wearer until the early 14th century.

6. Mail Armor: The most common form of armor available after the fall of Rome was mail. It was easy to produce and did not require large masses of iron. It was formed from rings of iron, each of which was linked through four others—two above and two below it. Mail armor was used to protect the body from the head to the thighs with a padded gambeson (vest) worn underneath. The full weight of a Templar’s weapons and equipment was between 53 and 60 pounds.