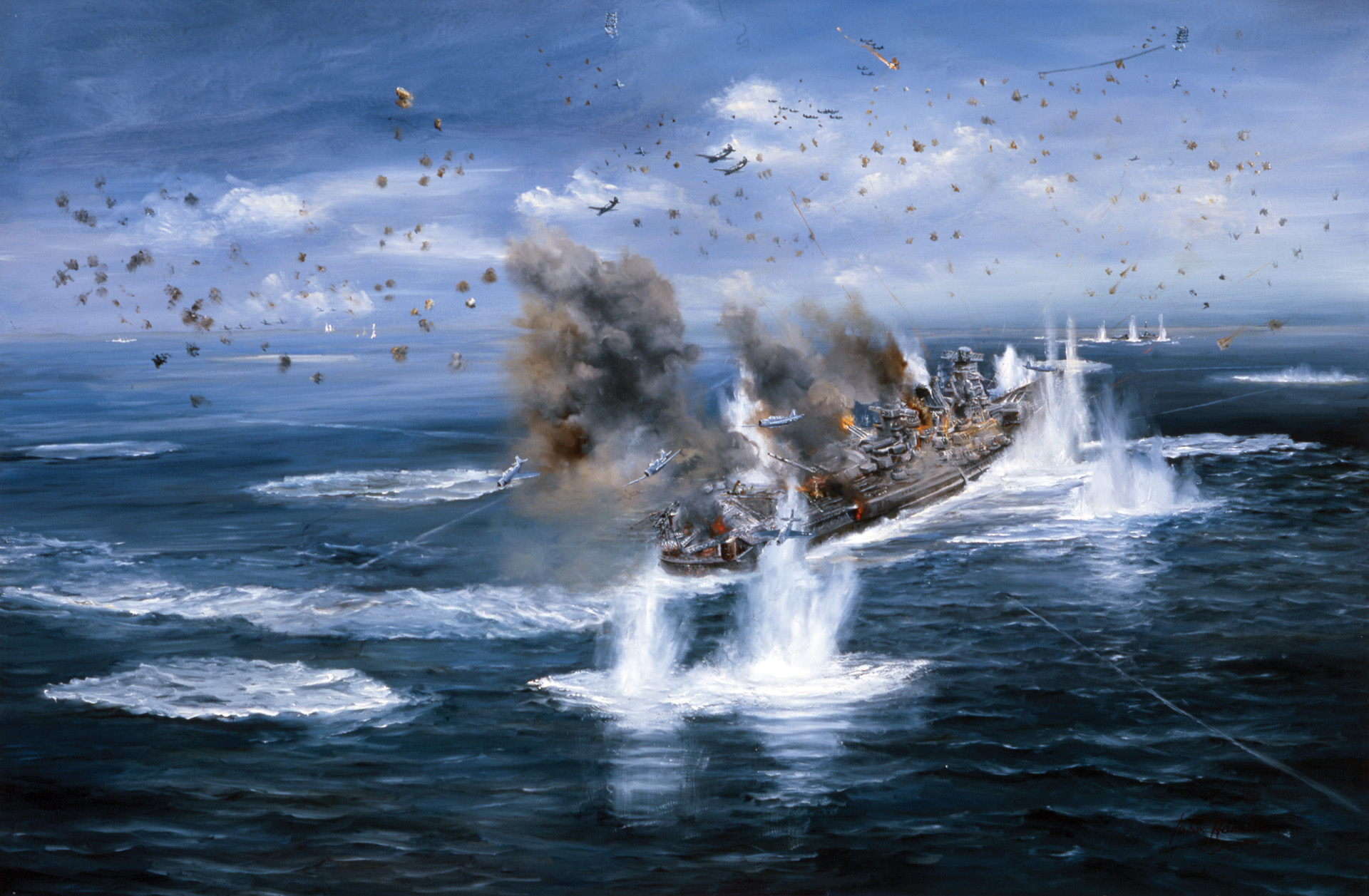 The superbattleship Yamato met its demise in Operation Ten-ichi-go, a last-ditch effort to disrupt the American invasion of Okinawa Island in April 1945.

Allied victory in both the European and Pacific theaters seemed inevitable by spring 1945. The German Army was fighting on its own soil, and Japanese forces were defending Okinawa, the principal island of the Ryukyu archipelago. The amphibious landing on Okinawa’s western shore, which began on April 1, were carried out by the U.S. Army’s newly formed Tenth Army and elements of the 3rd Marine Corps.

Six days after the landing, the commander of the Japanese First Mobile Fleet, Admiral Soemu Toyoda, unleashed massed kamikaze attacks against the Allied fleet anchored off Okinawa in an effort to thwart the invasion. The kamikaze sorties were part of Operation Ten-ichi-go (Operation Heaven One), which involved the total commitment of Japan’s remaining air and naval resources. The Japanese also intended to hurl the massive battleship

Yamato, which had narrowly survived the Battle of Leyte Gulf, on a suicide mission against the Allied warships supporting the landing.

Designed to counter the U.S. Navy’s numerical superiority, the Yamato-class battleships were the most powerful vessels of their kind ever constructed. Their mammoth size and heavy armament were part of a deliberate effort by the Japanese to build battleships that were superior to their American counterparts.

In the early 1930s, Japan’s militaristic government dreamed of empire. In 1934 Japan withdrew from the Washington Naval Treaty, which placed limits on the size and power of capital ships, in order to build capital ships and aircraft carriers that could rival those of the United States, Great Britain, and other major powers.

The General Staff requested a battleship with 460mm cannons, excellent protection, and fast speed. The final design was approved in March 1937. At 263 meters long and full-load displacement of 70,527 tons, the Yamato-class battleships were the heaviest of their type ever built. The dozen boilers that powered the battleships produced a maximum speed of 27 knots with a maximum range of 13,300 km at 16 knots.

The vessel’s firepower consisted of nine 460mm Type 94 naval guns, which fired a 1,426kg round with a maximum range of 42 kilometers. This firepower constituted the largest naval artillery ever deployed.

The battleship was protected by side belt armor that was 410mm thick. Its main guns were encased in turrets that ranged from a 650mm face plate to a 270mm thick roof. As for radar, Japanese technicians installed a comprehensive system that included air-to-surface, surface-to-surface, and hydrophone arrays.

Forty percent of the 460mm ammunition stowed aboard the ship were Sanshiki. These were incendiary anti-aircraft rounds that each exploded into nearly 3,000 fragments using a time-delay fuse.

The Imperial Japanese Navy planned to build five Yamato-class battleships, but only the Yamato and Musashi were completed. The construction of the Yamato began on November 4, 1937, at the Kure Naval Arsenal situated on the Seto Inland Sea in Hiroshima Prefecture. Construction of the Musashi began the following year at the Nagasaki shipyard.

The Yamato launched on December 16, 1941, just nine days after Japan’s surprise attack on the U.S. naval base at Pearl Harbor. The massive battleship spent the next two years either at Truk in the Caroline Islands or at Kure. On December 25, 1943, the Yamato came under attack while escorting a convoy sent to reinforce Japanese garrisons in New Guinea and the Admiralty Islands. The U.S. submarine Skate (SS-305) intercepted the convoy north of Truk. One of its torpedoes struck the battleship on the starboard side towards the stern. A repair ship carried out temporary repairs, after which the Yamato returned to Kure for permanent restoration.

The Yamato and Musashi were part of a major task force that sailed to oppose the American invasion force at Leyte in mid-October 1944. On October 24, 1944, multiple waves of U.S. aircraft succeeded in sinking the Musashi during the Battle of the Sibuyan Sea. The following day, the Yamato fired its guns at surface targets for the first and last time in the Battle off Samar.

At 6:58 am that day, the Yamato fired both forward turrets. It failed to score hits on its first target, though. She targeted another ship later in the day. The battleship’s official report states that it sank a destroyer, which the crew mistook for a cruiser, but the claim is unsubstantiated. The Yamato sped away from the battle after a number of torpedoes had been fired at her. The Japanese fleet subsequently withdrew due to low fuel.

After these clashes, the Yamato returned to dry dock for repairs and upgrades. Rear Adm. Kosaku Ariga became her last captain, and the ship’s complement increased to 3,332 personnel. A chronic shortage of fuel oil and American air superiority compelled the Yamato to remain in Japanese waters until April 1945.

Emperor Hirohito, who failed to comprehend the scale of the disaster Japan was facing, believed that one great military victory would force the Americans to sue for peace. The first attempt to thwart the Americans at Okinawa fell to the Fifth Air Fleet, which was responsible for defending Japan’s southern flank. Vice Adm. Matome Ugaki was given command of the air fleet, with orders to oversee waves of kamikaze attacks. The pilots would fly what were essentially manned torpedoes and manned rocket bombs, known respectively as Kaiten and Okha, against American forces massed for the Okinawa invasion. The kamikaze aircraft did significant damage to hundreds of ships, but they did not change the tide of battle.

Emperor Hirohito also instructed the Imperial Navy to join in the island’s defense. Many senior naval officials saw this as a waste of the navy’s remaining warships. They argued that the naval force might not even be able to reach Okinawa given that it would be totally devoid of air cover. Nevertheless, the plan went forward.

Vice Adm. Seichi Ito was tasked with leading the fleet composed of the Yamato, the cruiser Yahagi, and eight destroyers. Since the Imperial Navy had only enough fuel for a one-way sortie to Okinawa, there was no possibility of returning to the Inland Sea for future operations.

Ariga had orders to plow through the American invasion fleet, sinking as many transport ships as possible. Afterwards, he was to beach the great battleship so that it could serve as a gun platform until destroyed. Those Japanese sailors that survived the ordeal would then join the island’s defense force.

Having decoded Japanese radio transmissions, the American already knew of the pending naval operation. Admiral Raymond Spruance, the commander of the U.S. Fifth Fleet, ordered a pack of submarines to station themselves off the southern approaches to Japan’s Inland Sea to intercept the task force, but the Japanese fleet succeeded in passing unhindered through the Bungo Strait on April 6.

The Japanese fleet ran headlong into Admiral Marc Mitscher’s Task Force 58, which was composed of 16 fast carriers and escorting battleships, cruisers, and destroyers. When morning broke the following day, the men readied themselves for the eventual air assault. Martin PBM-5 Mariner flying boats tailed the ships.

The Yamato’s main cannons fired 460mm Sanshiki anti-aircraft rounds without effect. In the late morning, a squadron of fighters arrived to eliminate enemy air cover, but they found no enemy aircraft to engage. This meant that Mitscher’s 386 fighters, dive-bombers, and torpedo bombers would be unhindered in their attack on the Japanese fleet steaming south.

Shortly after noon, the Yamato detected incoming aircraft. At 12:32 pm the first wave of Americans attacked, and Ariga ordered all anti-aircraft guns to fire. The Yahagi temporarily drew attention away from the Yamato. Fate caught up with Japan’s last battleship nine minutes later, though, when a pair of 1,000-pound bombs struck the starboard side near the aft tower, destroying the aft radar room. Shortly afterwards another pair of bombs found their targets. Fires that were never extinguished erupted when one bomb exploded below deck while the other annihilated the aft 155mm turret, whose fragments ignited a blaze in its magazine.

Just before the second pair of bombs hit, the Yamato took a torpedo strike on the port bow. At the end of the first wave, two more torpedoes struck portside amidships, flooding the outboard port engine room. Evidence suggests another torpedo hit near the auxiliary steering room. All of the subsequent flooding caused a six-degree list to port. Counter-flooding eliminated the list.

The second wave arrived at 12:59 pm. The attacking aircraft concentrated on the port side, but no direct hits were confirmed. Shock waves from numerous near-misses weakened the hull’s structural integrity, and the sheer number of planes overwhelmed air-defense crews. Before the Yamato listed too much to prevent their operation, the main guns continued firing Sanshiki rounds (a type of incendiary anti-aircraft ammunition) to little effect. Seeing this, the chief gunnery officer changed the fuse delay to one second, so that the fragmentation shells would detonate 1,000 feet from the ship.

While in the midst of a turn to starboard at 1:33 pm, three torpedoes slammed close together portside amidships. Most critical was the flooding from the hit near the bulkhead between the outside engine and machinery rooms. The Yamato listed 18 degrees to port and slowed to 18 knots. Once again, counter-flooding of all starboard voids was attempted. It was only the flooding from a torpedo hit starboard amidships that corrected the list by 10 degrees.

Ariga was informed that any further port list could only be countered by flooding the starboard engine rooms. It was not an easy decision to make, for it would reduce the battleship’s speed to a crawl.

At 1:42 pm the final wave of American aircraft assaulted the reeling Yamato. Bombs scored four identifiable hits. Three struck portside amidships and one at the bow. Power to most of the ship’s guns was severed. Additional torpedo strikes on the port side signaled the battleship’s death. Two amidships hits flooded the port inner engine room. A third torpedo penetrated in the aft and jammed the rudder, locking the ship in a counterclockwise turn.

A final torpedo slammed into the Yamato’s exposed underbelly on the starboard side. Down to one engine, the ship slowed to eight knots. With a 22-degree list to port, the order to abandon ship was issued at 2:02 pm. Ariga stayed with the ship, as did a few other crew members. A short time later, with the bridge tower practically at sea level, all power failed.

The Yamato exploded, resulting in a massive fireball and a mushroom cloud that was seen in Kagoshima. The exact cause of the explosion remains a mystery.

For the loss of 10 aircraft and 12 men, the Americans had sunk the Yamato, Yahagi, and five destroyers. The three surviving Japanese destroyers rescued survivors. From the Yamato, 23 officers and 246 enlisted men survived, while 3,063 never returned to Japan. The battleship had taken eight confirmed bomb hits and 11 confirmed torpedo hits.

The Yamato and the Musashi were the most powerful battleships to be constructed and participate in naval combat. In an era where surface-to-surface engagements between capital ships rapidly became a thing of the past, the perceived threat from the two massive and expensive Japanese superbattleships far outweighed their achievements in the Pacific War.