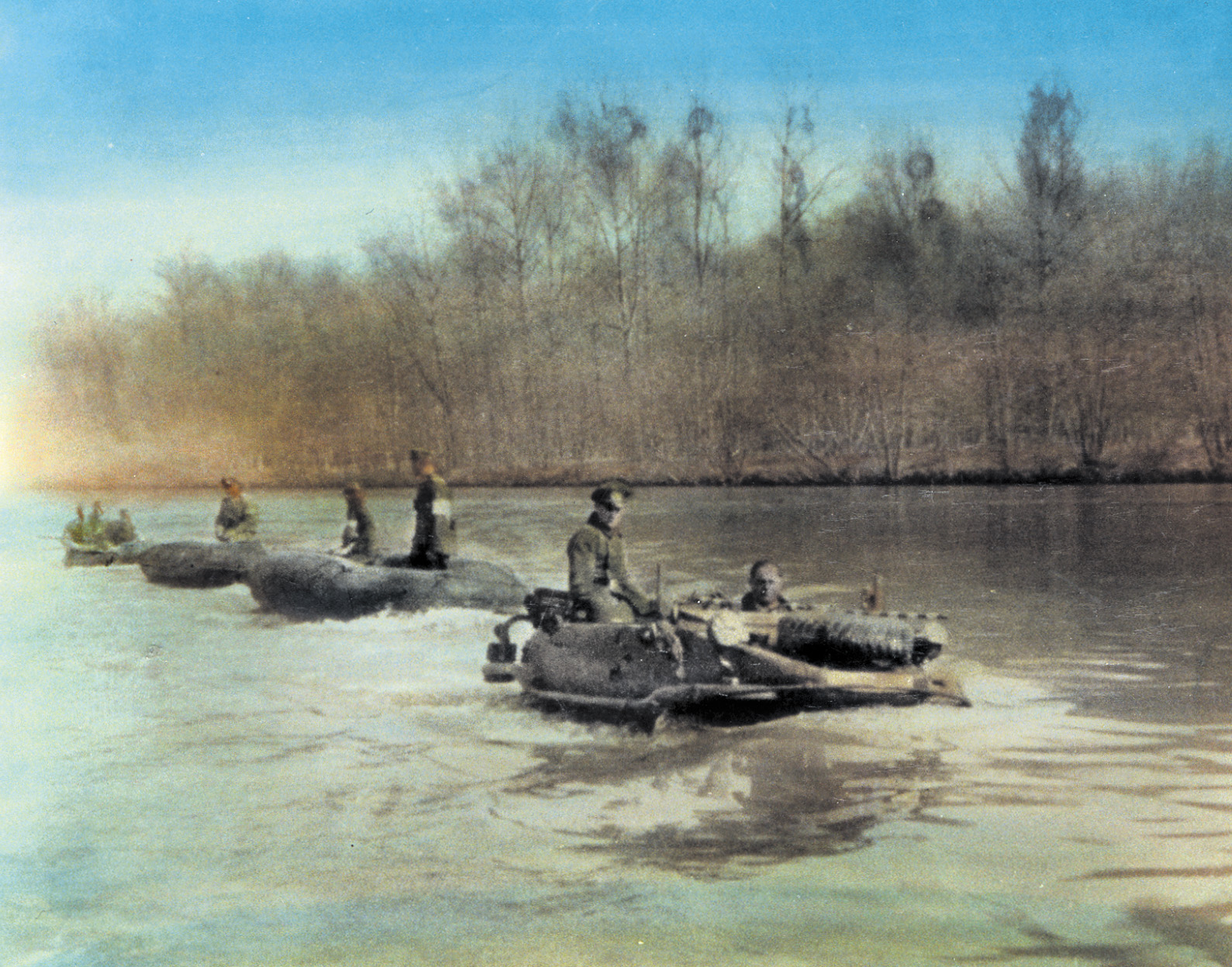 The German Type 166 Schwimmwagen—or Swimming Car—was one of the most versatile military vehicles ever built.

In the spring of 1940, as the German armed forces were sweeping across Western Europe, famed automobile designer Dr. Ferdinand Porsche, creator of the Volkswagen or “People’s Car,” was asked by the high command to build an all-purpose vehicle for the coming campaign against the Soviet Union.

In April 1941, as the Balkan campaigns got under way, the Waffen SS asked Porsche’s son, heir, and namesake, Dr. Ferry Porsche, to design a similar car. The result was the Kubelwagen, or bucket car, and a derivative of that design was an amphibious version called the Schwimmwagen, or swimming car. A total of 150 four-wheel-drive amphibians were manufactured for tests and trial runs.

The Evolution of the Schwimmwagen

The VW Kubelwagen and Schwimmwagen had very few parts in common but shared the same rear-mounted engine, an air-cooled flat four. The four-wheel-drive assembly, however, was special, as was its truly unique feature, a retractable water propeller at the rear of the small vehicle’s frame.

The bodywork of the waterborne Kubelwagen was a true single-welded, sheet-steel hull, more like a boat than an automobile, and reinforced with cross-members. As the car floated very low in the water, there were no doors to open or close, and one simply climbed in and out to enter or exit the vehicle.

Between 1942 and 1944, a total of 14,276 Schwimmwagens were built, serving on both the Eastern and Western Fronts. After the war, the car got a new lease on life in Europe as a recreational vehicle favored by duck hunters in swamps and marshes.

The Schwimmwagen had a top speed of 50 miles per hour on land and six miles per hour in the water. It had an air-cooled overhead valve, flat-four cylinder engine with a displacement of 1,131cc, and a rating of 25 horsepower. It also had a four-speed transmission and a hinged, triple-bladed propeller and four-wheel brakes, plus a seamless pressed-steel monococque hull, built to keep out water.

It initially had competitors, but in the end the Schwimmer beat them to become the sole amphibious vehicle of both the German army and the Waffen SS. Its closest competitor had been designer Hannes Trippel’s Type 2SG, of which a thousand were built before all amphibian production was halted in 1944.

The Porsche Design Bureau’s Type 128 Kubelwagen, the prototype Schwimmer, appeared in 1940, and 30 units were built and delivered to the army the following year for testing. Its boat-shaped body rested on the standard VW chassis frame. After receiving the go-ahead from Maj. Gen. Hans Juttner’s SS Leadership Office, the Type 128 was improved as the Type 166, and it was this model that entered mass production in 1942.

The Schwimmwagen was designed not only as a waterborne vehicle, but also as a replacement for the motorcycle scout vehicles that had proven their worth in Western campaigns. The motorcycles had been introduced to replace horse cavalry. Ironically, despite the motorcycle, the horse would make a belated comeback in the East for the simple fact that it was better suited for off-road terrain.

The Type 166 production model Schwimmwagen had a wheelbase 40 cm shorter and a width 10 cm smaller than that of the earlier Type 128. The 1,130 cm engine was the same as that of the 1943 Kubel, with a water draft of 77 cm. Besides the Waffen SS, other users of the handy vehicles were the regular German Army pioneer (engineer) battalions, Reich Marshal Hermann Göring’s Luftwaffe field divisions, and the elite parachute forces of Luftwaffe General Kurt Student.

The Early Model: the Type 128 Schwimmer

On September 21, 1940, the first box-like Schwimmwagen model appeared, looking very much like the Kubel Type 87, with doors welded shut. Decades after the war (from 1973 to 1976), a variant of this car reappeared in both the United States and Mexico as the Volkswagen “Thing.”

The Type 128 Schwimmer also had the Kubel Type 87 power plant, but with front-axle and front-wheel drive, a locking differential, super watertight front wheel bearings, and front axle carrier screws encased in rubber rings. The speedometer cable was passed through a watertight body with rubber sleeves and metal protective caps. It also had twin three-leaf spring bars.

The Type 128 Schwimmer transmission was also different, with easier assembly rear axle drive shafts, half-shaft crown wheel double sealing, rear axle bonding to the main body by sleeves, spring bars, and different rear shock absorber attachment and sealing. The brake cables were packed with grease and also made watertight, but there were no lubricating nipples.

On November 1, 1940, the prototype Schwimmwagen was ready to be tested by the Army Weapons Office. The rigorous trials, on the Autobahn, secondary roads, cross-country, and in the water transport role for which it was primarily designed, lasted until December 6.

The Type 128 VW Schwimmer used six liters of fuel per hour while in the water. In December 1940, the Wehrmacht authorized the building of 100 more vehicles, and the Drauz Company, later joined by Ambi-Budd, was commissioned to build the bodywork. More tests were conducted during the spring of 1941, before and during Operation Barbarossa on the Eastern Front. Waterborne runs were also made by the Instructional Department of the Wehrmacht at Wunzdorf Lake in Germany. Again, the new Schwimmers passed their tests.

A final Alpine trial of a trio of Type 128s occurred during August 1941, as the Germans were winning resounding victories in the East against the reeling Red Army. The mountain tests encompassed a total of 2,580 kilometers. The official report stated, “Driving mountain paths in the high mountains under difficult conditions, as at the Kitzbuhler Horn, or under the very worst conditions at the Rudnicker Alm near Watsching, sometimes muddy, rocky, very narrow and steep, demonstrated to us as never before the Type 128’s extraordinary off-road capability when driven sensibly. We drove on paths that had never before seen a motor vehicle, and the total weight always amounted to almost half a ton.

“The vehicle’s water capability did not fall short after its great off-road test runs, as it performed faultlessly in rivers at a higher speed than that of the other [competitor] vehicle.” On February 18, 1942, both the 128 and 129 were discontinued in favor of the improved Type 166, which was promulgated the following April.

Introduction of the Type 166

The first Type 166 was tested at the Max Eyth Reservoir outside Stuttgart in March 1942, with acceptance by the High Command of the Army (OKW) Weapons Office given on May 29. On June 6, 1942, exactly two years before D-day in Normandy, the initial batch of completed Type 166 models rolled off the assembly lines. During July 1942, snow testing was conducted on Grossglockner Mountain. By the end of 1942, Wehrmacht and SS units in the field began receiving their trusty little Schwimmers.

So seaworthy was the vehicle that a committee of the Weapons Bureau seriously tried to get Dr. Porsche to equip it with a green light to starboard and a red one to port to conform to international navigation rules.

For protective armament, the Schwimmwagen had an MG-34 machine gun mounted on a swivel. On the right-hand side of the hull’s interior, four magazines were placed for easy access by the gunner. 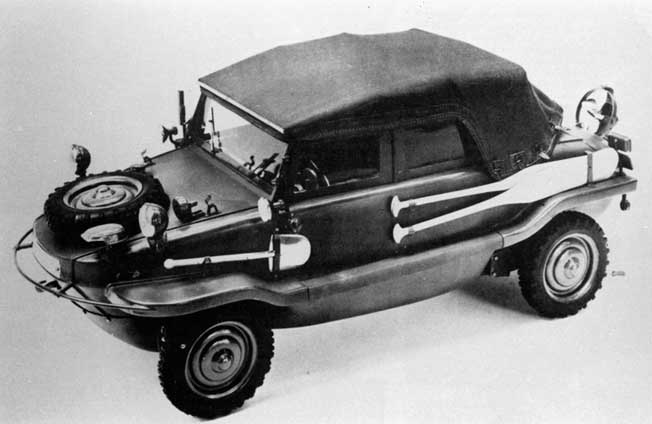 According to Dr. Ferry Porsche, writing in his 1976 memoir, We at Porsche, “This machine [the Type 166] could carry four people and differed from its predecessor, the Type 128, not only in size but in detail. It carried much less equipment … an anchor and similar equipment usually found in Navy craft were considered unnecessary … Its prime purpose was for officers of advance units to move across country, ford rivers and carry out reconnaissance by water. In fact, officers used some of them as platforms for duck shooting!…

“Our experience with the Type 166 amphibian during the Russian campaign was incredibly good. This compact machine had no trouble using the same terrain as tanks! I can speak with some satisfaction, as I was responsible for all Kubelwagen production—both land and amphibian types—from 1939 until disaster overtook us in 1945….

“By August [of 1941], the first prototype was ready for testing. I was asked to bring this car to Hitler’s headquarters for a demonstration, and he appeared to be pleased.… He took a long time inspecting the vehicle and asked the most detailed questions … ‘I would like you, by the way, to think over one serious problem. It concerns our soldiers in the East. They constantly have to fight off swarms of mosquitoes as well as the Russians. Couldn’t you devise some kind of mosquito net for this car that would give them protection while in transit?’ Hitler asked.

“At precisely that moment, one of the generals present, who was standing right beside Hitler, was bitten by a mosquito on the cheek. With amazing speed, Hitler struck out and slapped the mosquito dead. Immediately the blood it had been sucking began to run down the general’s face. Hitler thought this very funny. ‘Look!’ he said. ‘The first German general to shed blood during this war!’”

In addition, the vehicle had a five-speed gearbox with two self-locking differentials and mechanical brakes plus independent suspension with torsion bars. The tire size was 5.25-16 or 200-12.

The question arises as to how the propeller system actually worked. The vehicle could take a flying leap into the water. Once there, the propeller was engaged to the drive shaft after having been lowered beneath the surface, and the boat-like vehicle glided serenely to the far shore. Upon arrival, the propeller was disengaged from the drive shaft and hauled manually from the water. The four-wheel drive was then reengaged, and the vehicle drove itself out of the water once its front wheels touched solid ground. The vehicle’s rudder action was directed by turning the wheels to the right or left.

The Legacy of ‘the Boat on Wheels’

In a very real sense, the Schwimmwagen was a boat on wheels that also rolled on land, with a high-mounted exhaust system to the rear and a crude air intake grille behind the cockpit. According to author Keith Seume in VW Beetle, “The large engine access panel was designed to help prevent water from getting into the engine bay. The simple top folded down out of the way, but offered little protection when raised. Rudimentary mudguards offered similarly minimal protection.… This is regarded as one of the most versatile military vehicles ever built.”

The final word on this remarkable wartime vehicle is provided by American author Walter Henry Nelson in his superb 1965 work Small Wonder: The Amazing Story of the Volkswagen. The British Army captured the VW works at Wolfsburg in 1945, and especially liked the Schwimmer. “They would hold games in which they would run it off wharves into the Mittelland Canal at 40 mph, hitting the water with a great splash and then driving the cars up and down the canal,” wrote Nelson. 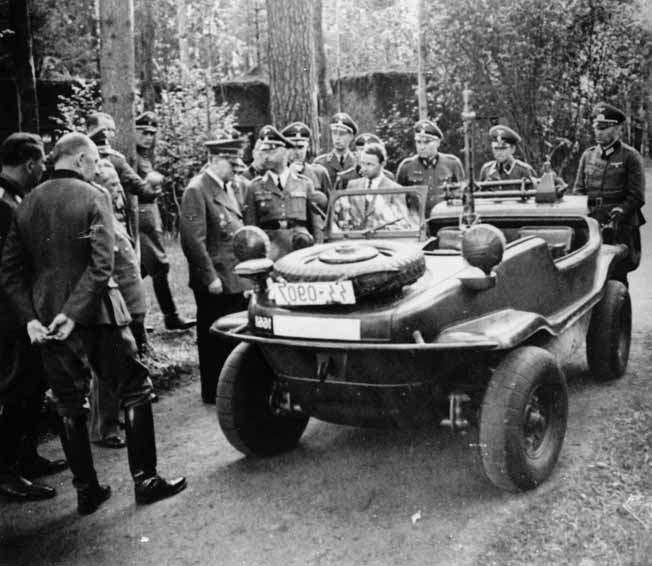 The French wanted to seize some of the factory’s essential butt-welding machinery, but the British decided to deter them from this goal in a rather unique way. They put their near-drunk guests in Schwimmers and drove them along the canal, then swerved suddenly off the embankment and into the water, flying out over the surface at top speed and then landing smack down into the water.

Blaine Taylor is the author of a trio of books on World War II, as well as the new work Volks-wagen Civil and Military Vehicles of the Third Reich. He resides in Towson, Maryland.