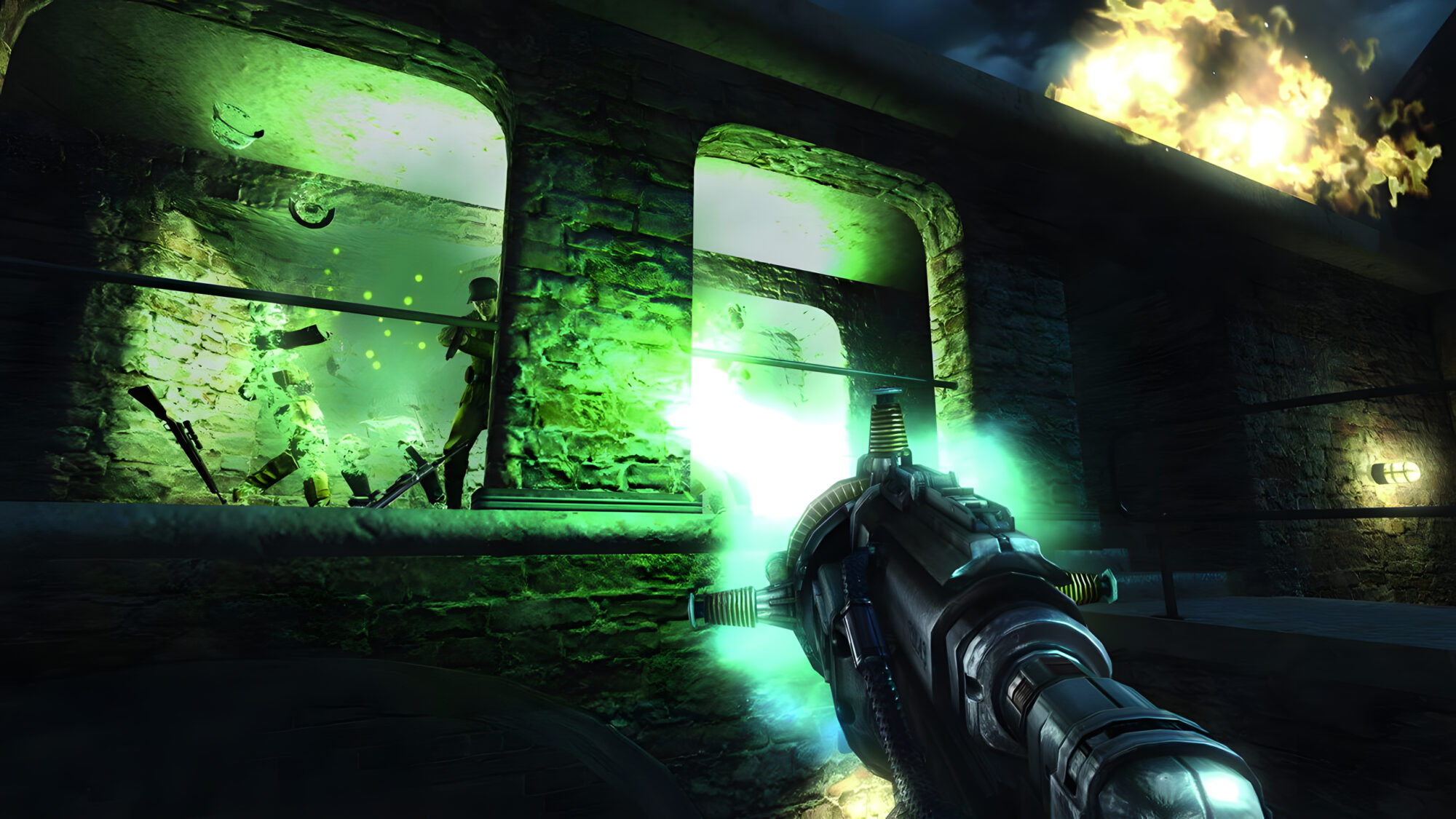 This article appears in: February 2010

Creative minds have been coming up with ways to mess with the events of World War II for some time, well before Quentin Tarantino took us through a reality warp and rearranged Hitler’s face with Inglourious Basterds. No one named Captain America ever socked The Führer right in the kisser, and I’m pretty sure Adolf’s signature in Dr. Jones’s Grail Diary is part of what we know as “Movie Magic.”

No matter how many times we’ve seen alternate timelines like these, there aren’t many cases as extreme as the tale of one B.J. Blazkowicz, hero of the Wolfenstein series. He’s been taking on the Nazis and their blasted dealings with the occult for a while now, and he may just be the only man, even in fictional history, to face off against a quad-chaingunned Hitler stomping around in a robotic suit. Now that’s a showdown that makes even the exploding head of “Master D” in Bionic Commando look like a fizzling firecracker.

The run-and-gun stylings of Wolfenstein 3D were a far cry from the stealthy and methodical pacing of the 1981 Apple II game that inspired it, Castle Wolfenstein. Completely eschewing the concept of tip-toeing quietly around SS troops, Wolfenstein 3D brought the first-person shooter genre to everyone’s attention in 1992 thanks to the brisk speed of its action, allowing players to blow away Nazis before even the first syllable of “Achtung” could escape their tinny built-in speakers.

Wolfenstein has gone through a number of changes over the years, and that’s not even taking various and sometimes bizarre forms of censorship into account. (Turning attack dogs into rats in the Super Nintendo version is a personal favorite of mine.) That’s bound to happen at some point, though, especially when the game has seen more ports than the surliest of sailors. One of the more interesting updates to the formula, for example, came in the form of Wolfenstein RPG, available for mobiles and in slightly more beefed-up form on iPhone.

If role-playing elements and the untimely destruction of Nazis seem like strange bedfellows to some out there, then comfort comes in the war-worn trappings of B.J. Blazkowicz’s latest proper outing. Following up id’s 2001 effort, Return to Castle Wolfenstein, Activision’s simply-titled Wolfenstein (developed by Raven Software for the Xbox 360, Playstation 3, and PC) puts our hero on the front lines once more to go nothing short of ballistic on the paranormally twisted enemies of World War II. 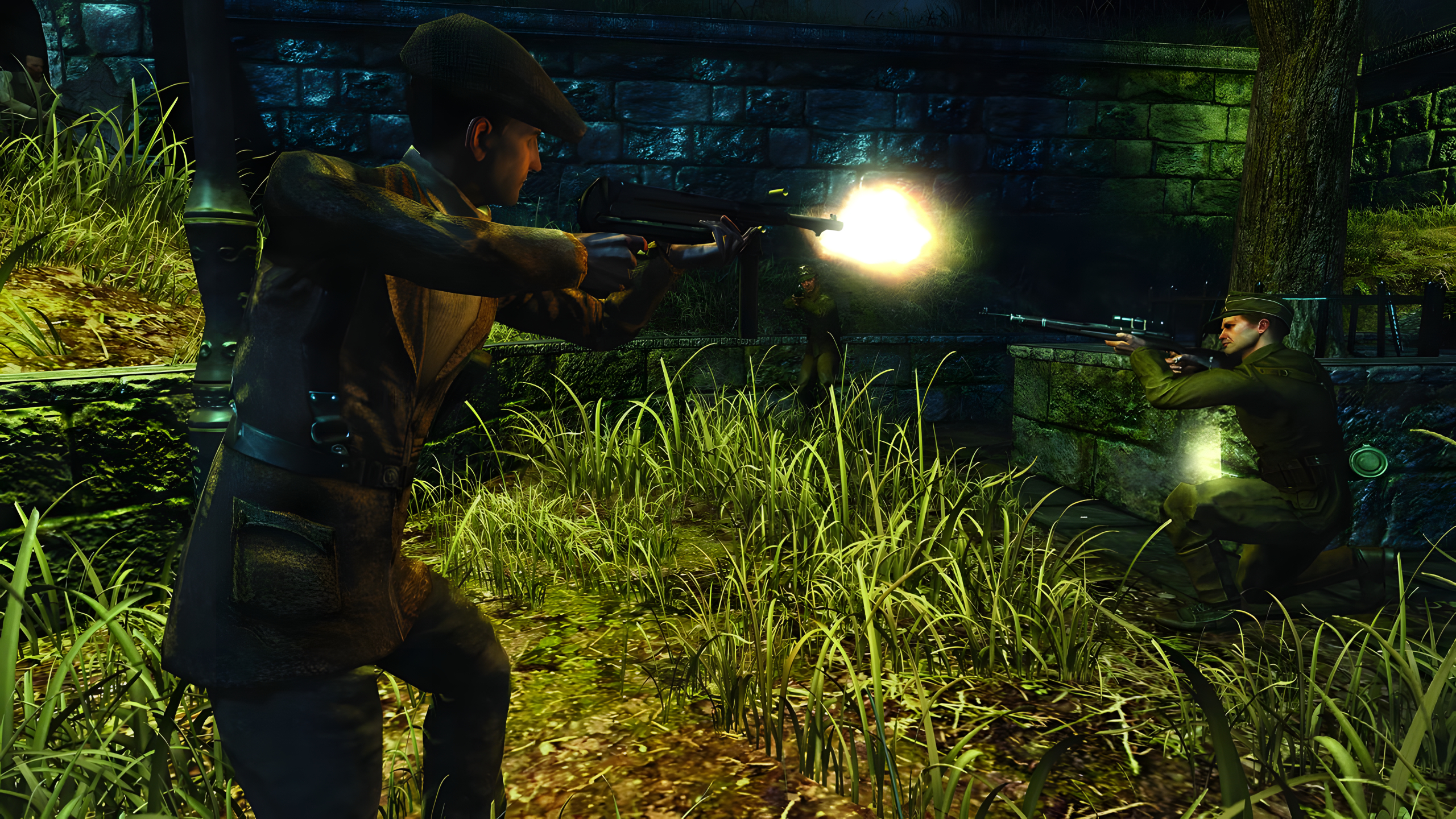 Wolfenstein is at once a familiar and somewhat fresh take on the series that went far to make a name for id Software in the nineties. Agent B.J. Blazkowicz makes a triumphant return, fierce five o’clock shadow and all, to put a stop to the Nazi forces, but ends up with much more power at his disposal than a simple assortment of artillery could ever hope to provide.

During what should have been a fairly routine sabotage mission aboard a Nazi warship with its guns itching to rain down on London, B.J. witnesses the power of a curious medallion, hinting at more pesky occult tinkering on the side of evil that has to be squashed for good. Luckily, he finds a similar item to call his very own, granting him some much needed special abilities to even the ever-teetering playing field of war.

Enemy threats in Wolfenstein vary, and quickly become more interesting once B.J. unlocks the power of the Thule Medallion. By using the device to enter a realm known as the “Veil”—a world between our own and the Black Sun dimension that immediately reminded me of the climactic visions in Stuart Gordon’s From Beyond—run of the mill soldiers become fodder for heightened senses and speed. To combat this, some enemies have their own supernatural powers, and can blaze across the screen in quick bursts, throw out energy shields, or disappear from sight altogether.

Most notable is Raven’s attempt to make Wolfenstein an open world experience of sorts through the hub of Isenstadt, a fictional town oppressed by Nazi control, its citizens constantly holed up in fear. It’s not like the developers throw you into a vast expanse and leave you to roam onward indefinitely, but it’s a nice, controlled touch that lets the player take on missions from multiple groups, while keeping it from being overwhelming to those unfamiliar or just plain uninterested in the open world genre itself. 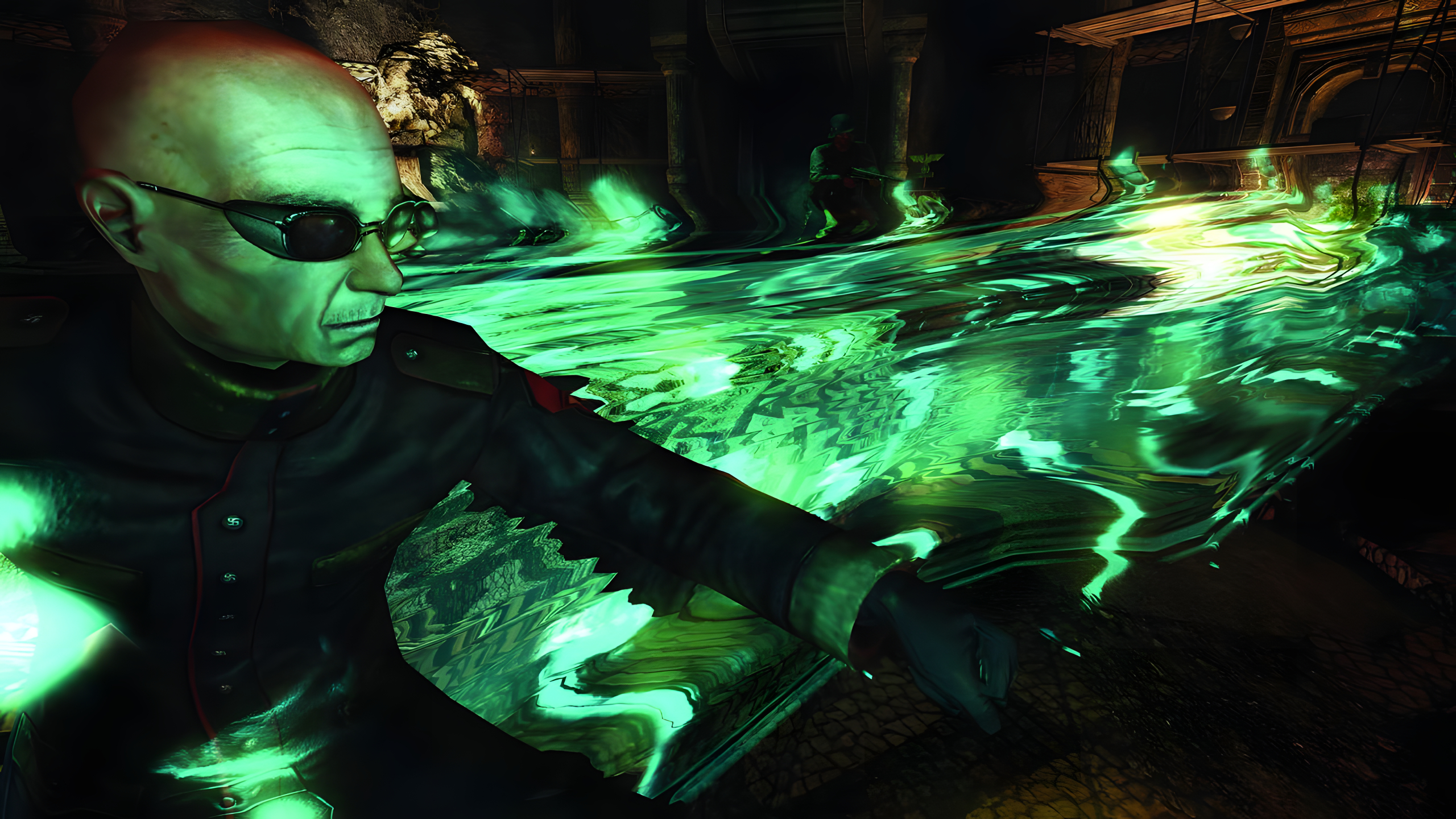 In the face of its structure, Wolfenstein successfully retains the fast-paced action everyone expects the series to deliver; they can throw in all the hub areas they want as long as they don’t mess with the ability to run and gun with reckless abandon. The proceedings look pretty handsome, too, running on the id Tech 4 engine (Doom 3, Quake 4), which drives home the otherworldly effects of the medallion with only a handful of hiccups.

The story tends to plod at times, especially when you just want to get on with a mission and do what you’re there to do (read: shoot things a lot), but the occasional throwbacks to the series’ roots liven up some of the encounters. I’d personally rather spend my time digging around for more of the game’s hidden items (like gold and intel), but I’d probably also be complaining if they hadn’t included any form of narrative whatsoever.

Some aspects of Wolfenstein bring to mind the 2006 FPS Prey, possibly because that title was developed on a modified id Tech 4 engine and was home to a similarly toned spirit world. Multiplayer has its ups and downs, and features class-based combat that lets each player choose between a Soldier, Medic, or Engineer in three different modes, but doesn’t really put forth much effort to surpass what was already established in Return to Castle Wolfenstein.

Despite the pedigree of its title, Wolfenstein still has a lot of stiff competition out there, especially when stacked against the millions-served likes of the Call of Duty: Modern Warfare series. Wolfenstein offers something a little different, though, and succeeds as a single-player action/adventure that makes for a killer five-day rental, and a decent purchase for those who’ve taken an especially deep bite from the Nazi Occult bug.