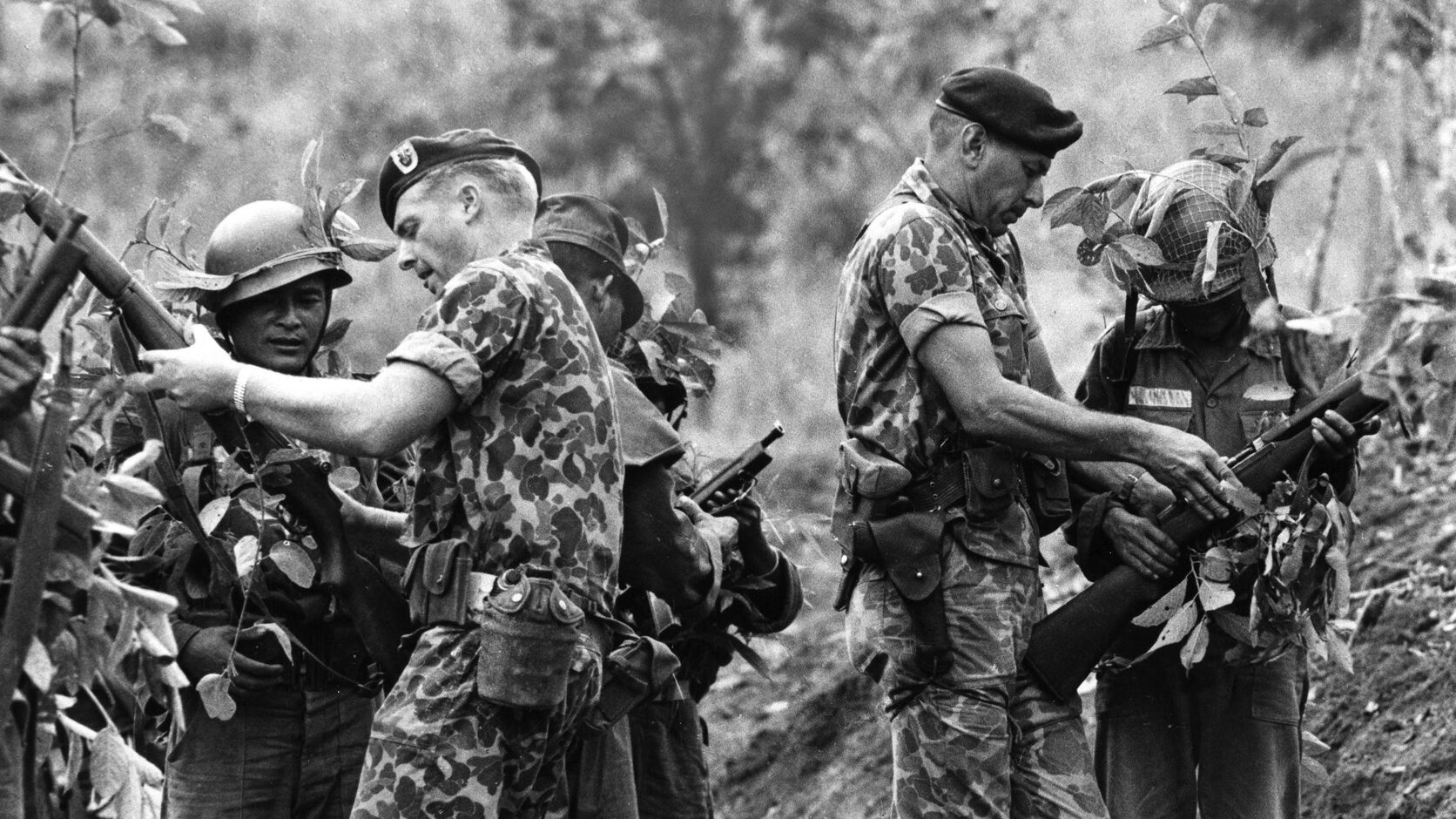 Special Forces Team A-726 had been out on patrol far from the unit’s camp at Nam Dong on the night of Friday, July 3, 1964, when radiomen back at the A team camp received an ominous warning from the field. “The villagers are scared and they won’t tell me or my interpreters why,” said Sergeant Michael Disser.

Another warning of the threat of Viet Cong attack, which now hung thick as morning mist in the jungle, came from Sergeant Terry Terrin on his return on Saturday from a three-day patrol. He reported that two village chiefs in the valley where the camp was situated had been found murdered by the communists.

Captain Roger Donlon, the lanky 30-year-old commander of the A team, told his team sergeant to put his men on high alert that night. “Get everyone buttoned up tight tonight, Pop. The VC are coming. I can feel it. I want everyone ready,” Donlon told Master Sergeant Gabriel “Pop” Alamo in a flash of intuition.

“All hell is going to break loose here before the night is over,” Staff Sergeant Merwin Woods, who shared Donlon’s sense of foreboding, wrote in a letter to his wife on Saturday, July 4, just before the attack began.

Luckily, the Americans were not alone in defending the sprawling camp that lay 34 miles northwest of Da Nang in Thua Thien Province in northern South Vietnam. Donlon’s 11-man team, along with attached Australian Warrant Officer Kevin Conway and 60 ethnic Chinese Nung mercenaries, held the inner core of the camp. An outer ring of the camp was held by 311 South Vietnamese soldiers of Strike Force 122 of the Army of the Republic of Vietnam (ARVN).

The Nam Dong camp was situated in a valley just a few miles from the Laotian border that was home to nine villages totaling 5,000 residents. The Americans and South Vietnamese had established the camp to protect the villagers from communist depredations.

Donlon, a native of Saugerties, New York, had struggled to find his niche in life after graduating high school. He finally hit his stride when he enlisted in the U.S. Army in 1958 and entered the Infantry Officer Candidate School at Fort Benning, Georgia, from which he graduated as a second lieutenant. He later completed training at the demanding Special Warfare School at Fort Bragg, North Carolina, in September 1963. He shipped out for South Vietnam as a member of the Green Berets the following spring.

Although the formal rules of engagement governing what Special Forces teams could do in South Vietnam at the time restricted them to giving military advice and forbade them from leading troops in combat or even firing their weapons unless fired upon, the actual situation on the ground was dramatically different.

The pervasive cowardice and general incompetence of ARVN soldiers and officers made it imperative for Special Forces officers and NCOs to take an active leadership role in combat. Indeed, when left to their own devices, even supposedly elite ARVN forces were easily routed by the fanatical Viet Cong.

The attack on the Nam Dong camp began in the early hours of July 5, as many attacks would during the Vietnam War: with the crump of an enemy mortar signaling the onset of an assault.

Donlon was just about to enter the mess hall when the first incoming round exploded inside it, creating a brilliant white flash. “The VC mortars were zeroed in on us,” Donlon said afterwards. The first mortar shell the enemy fired was a white phosphorous round that exploded with myriads of “different-colored flames shooting out of it,” recalled Woods.

Looking at his watch, Donlon noted that it read 2:26 AM. He rushed into his command post as his team members and the Nungs sprang into action and began returning fire, engaging the enemy with a recoilless rifle, mortars, machine guns, automatic weapons, and hand grenades.

Some of the Americans scrambled to put out the fires as mortar shells exploded throughout both parts of the camp. The Viet Cong scored multiple hits on the camp’s command post, so Donlon and Alamo had to pick up the weapons and ammunition stored in the CP and carry them outside.

Although Donlon made it out of the command post before it was totally obliterated, Alamo was not so fortunate; he was badly burned when a section of the burning shack collapsed on top of him.

Disser fired illumination rounds from his mortar, and the Special Forces troops looked out in awe at the perimeter, where they saw literally hundreds of enemy soldiers. Donlon would later learn that the camp was under attack by more than 900 enemy troops in two reinforced battalions. “[It was] the most frightening sight in my life,” he said.

After dragging the weapons out of the command post, Donlon was running with his AR-15 rifle to come to the aid of his men when a mortar round slammed into the ground next to him. The explosion hurtled him through the air, peppering him with shrapnel wounds and stripping him of his ammo belt and one boot.

Donlon jumped into Woods’ fighting hole, but almost immediately shifted to the mortar pit occupied by Disser. When he spotted several VC inside the perimeter wire near the camp’s main gate, he ordered Disser to fire an illumination round. “I squeezed off a half-dozen rounds,” he said. “Two of the VC slumped [to the ground]. The third started crawling into the grass. I threw a grenade and he stopped.”

The survivors of the A team would later realize that the three dead VC were sappers armed with satchel charges, intending to detonate the camp’s ammunition bunkers and knock out the gun pits.

Donlon realized at that time that he had been shot in the stomach. “Somewhere along the line, I had been hit,” he said. “My left forearm was bleeding, and there was a shrapnel wound about the size of a quarter in my stomach. It was belt-high on the left side, and it was bleeding.”

Refusing medical assistance for himself, Donlon told his medic to focus instead on patching up his fellow Green Berets. He then asked his communications specialist, Staff Sergeant Keith Daniels, whether he had requested air support. Daniels had indeed done so, specifically requesting a flare ship to provide better illumination.

True to form, ARVN Strike Force 122 had completely folded during the first wave of the attack. This made it all the more important to keep the Nungs in the fight. Encountering four wounded Nungs, Donlon personally patched them up with bandages and tourniquets and urged them to go back into action. “Come on, you fellows are going to be all right,” he told them, as he handed them their weapons. “You can still fight.”

Manning a defensive position in a sandbagged bunker alongside the wounded Alamo was the team’s executive officer, Lieutenant Jay Olejniczak, who was armed with the highly effective M-79 grenade launcher. Olejniczak dropped rounds in a rapid-fire fashion among VC who were 30 yards away near the ammunition bunkers.

Casualties among the defenders of the inner camp were steadily mounting. Warrant Officer Kevin Conway was fatally wounded when he was shot between the eyes early in the battle. Another mortar round soon exploded next to Donlon, inflicting grievous shrapnel wounds to his left leg.

By this time, the VC were clustered in groups of 10 to 15 men and trying to breach the barbed-wire perimeter of the inner camp. In a desperate attempt to stop the Americans and Nungs from cutting them down with automatic-weapons fire, the VC began hurling dozens of grenades into the inner camp. The situation grew increasingly desperate for the A team. Alamo had been struck by enemy fire in the left shoulder and just below the eye. Olejniczak had been hit in the legs, shoulders, and back.

Realizing the mortar pit was about to be overrun, Donlon ordered those who could walk to relocate to a safer position. Donlon draped one of Alamo’s arms around his shoulder and tried to carry him to safety.

“I was in about a half-standing position when a tremendous blast went off in my face,” he said. A mortar round had stunned him and sent shrapnel into his left shoulder. Looking down into the mortar pit, he saw that Alamo had not survived the blast. Donlon grabbed the 60mm mortar and carried it to where the other wounded were firing into clusters of enemy soldiers.

As the fighting continued unabated, Donlon crawled around and retrieved heavy weapons from gun pits that had either been abandoned or in which the crews had all been slain. While under enemy fire, he retrieved both a 60mm mortar and a 57mm recoilless rifle. He ensured that the mortars remained in action and directed their fire. Although severely wounded, he crawled 175 meters to an 81mm mortar position, where he directed its fire to prevent more enemy soldiers from entering the camp. During these efforts, he was wounded a fourth time when shrapnel struck his face and upper body.

Donlon showed “great courage and coolness under fire,” stated his Medal of Honor citation. “Without hesitation, he left his sheltered position and moved from position to position around the beleaguered perimeter while hurling hand grenades at the enemy and inspiring his men to superhuman effort.”

The beleaguered A team heard the welcome roar of friendly aircraft a few minutes after 4 AM. “[The flare ship] brought a lot more than light,” Donlon said. “It brought hope to us in the camp, and it must have discouraged the VC, for little by little, their firing tapered off. A flare ship is usually followed by an air strike, and they knew it. Within minutes, they began to withdraw, but they were far from through with us.”

Desperate to force the survivors of the camp to surrender, the VC began using a loudspeaker. An interpreter told Donlon that the speaker was instructing the Americans to lay down their weapons and surrender, or else. “We are going to annihilate your camp. You will all be killed!” the communist soldier continued. Donlon’s response was to direct 10 rounds of white phosphorous mortar rounds at the speaker’s suspected position. Nung soldiers manning machine guns also directed their fire at the target; however, they failed to silence the enemy soldier on the loudspeaker. Shortly afterwards, enemy troops began operating a 60mm mortar from within the camp. Donlon directed Woods to target the suspected position with the 81mm mortar he was operating, which successfully knocked out the enemy mortar.

About that time, the sun began to slowly rise, and the enemy withdrew. From the initial onslaught to the enemy’s last desperate efforts to seize the camp before daylight, Donlon’s leadership made the difference between victory and defeat. “[Donlon’s] dynamic leadership, fortitude, and valiant efforts inspired not only the American personnel but the friendly Vietnamese defenders as well and resulted in the successful defense of the camp,” stated the medal citation.

The Americans counted 54 enemy dead left behind, although many more were likely killed. Within Team A-726, Alamo and Sergeant John Houston died, as well as Warrant Officer Conway. Alamo and Houston posthumously received the Distinguished Service Cross. The other team members received either the Silver Star or Bronze Star. “The Medal of Honor which President Johnson awarded me belongs equally to all of us,” Donlon said.