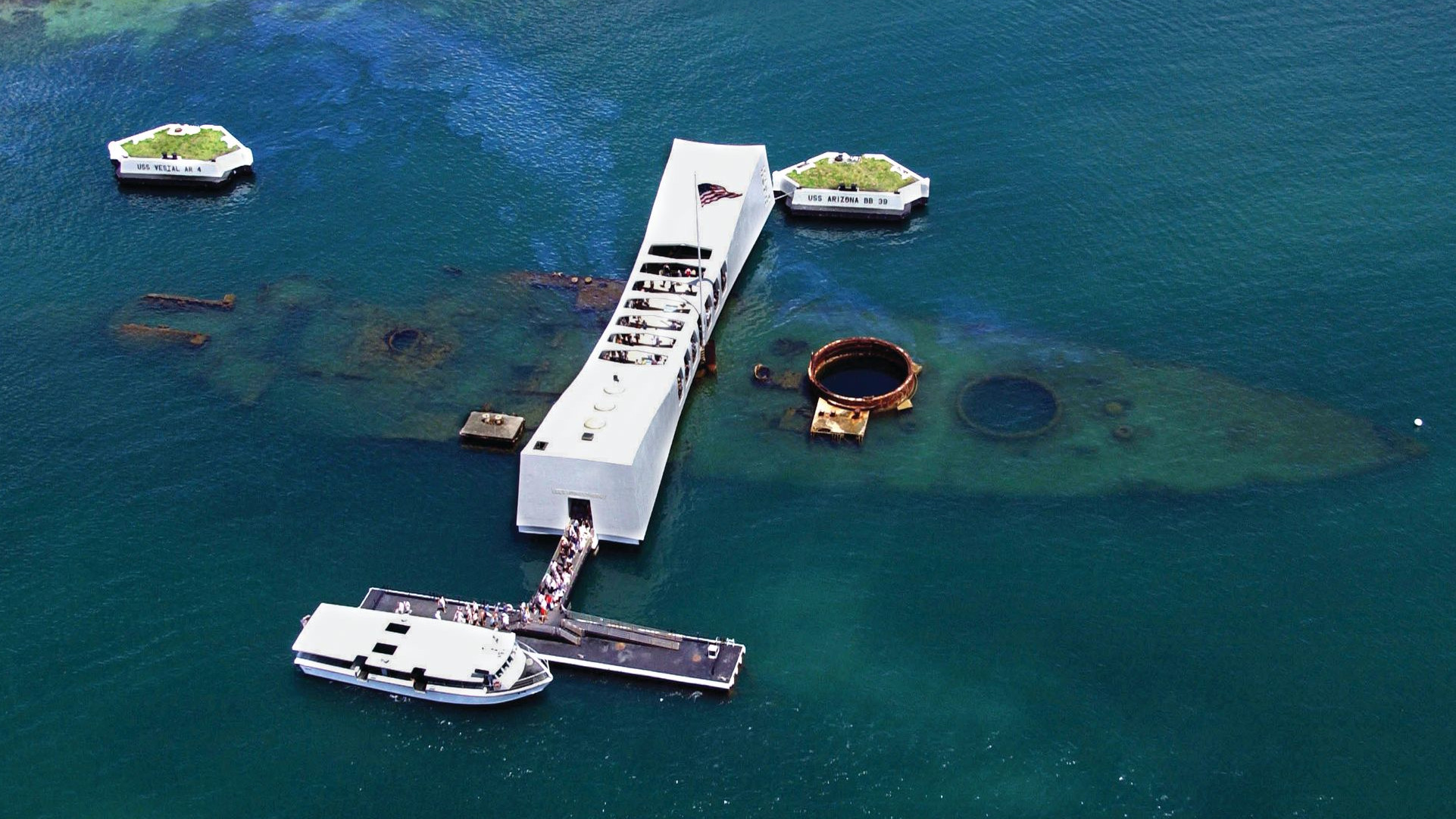 The Hawaiian island of Oahu is home to numerous museums, exhibits, and memorials of World War II.

There are few places on earth that have as many World War II museums, memorials, and monuments located in such a small area as the island of Oahu. Here are a few of the most significant:

Over 90 percent of the tourists who come to Oahu visit Pearl Harbor. To begin your tour, start at the U.S. Navy Base at Pearl Harbor and proceed to the Visitor Center, where you will board a Navy launch that takes you out to the USS Arizona Memorial. Here you will find the names of all the American servicemen who lost their lives aboard the battleship that fateful day. You can also view the remains of the sunken ship (which is still leaking oil) in the clear, shallow waters of Pearl Harbor. A visit to the Arizona Memorial is a solemn and moving experience, even for those who had not yet been born when the attack occurred.

The launch will also take you around Ford Island, where you can see the upturned hull of the World War I battleship USS Utah (BB-31), which was being used as a state-of-the-art bombing and submarine target and anti-aircraft gunnery training ship at the time of the attack. (The USS Utah memorial can be visited while on a tour of Ford Island.)
[text_ad]

As one of Hawaii’s most popular tourist attractions, the wait for the tour to begin can be an hour or more. PacificHistoricParks.org

Also located at Pearl Harbor is the USS Bowfin Submarine Museum. Nicknamed the “Pearl Harbor Avenger,” the Bowfin is one of only 15 U.S. subs that did not end up as scrap, used for target practice, or sold to other nations after the war. Bowfin.org

Another major attraction at Pearl Harbor is the USS Missouri (BB-63)—the battleship on which the articles of surrender were signed by representatives of the Empire of Japan on September 2, 1945. The Missouri—nicknamed the “Mighty Mo”—is itself a floating museum and memorial. The Mighty Mo and her three Iowa-class sisters were the largest, most powerful warships ever built.

During the final month of the war, the Missouri served as Admiral William “Bull” Halsey’s flagship while he was in command of the U.S. Pacific Third Fleet. Her 16-inch guns fired shells that were as heavy as Volkswagens and could travel up to 23 miles in less than a minute.

So potent a warship was she that the Missouri also fought during the Korean War and the Gulf War of 1991. She was then retired, mothballed, then refurbished to serve as the floating museum she is today. USSMissouri.org

While at Pearl Harbor, don’t miss the Pacific Aviation Museum, located in Hangar 37 on Ford Island. The war in the Pacific could not have been won without air power, so this fine collection of now-rare vintage aircraft and many other exhibits paying tribute to the brave aviators is on display. PacificAviationMuseum.org

National Memorial Cemetery of the Pacific

It takes only one visit to a national military cemetery to truly understand the idea that “freedom isn’t free,” and few military cemeteries convey that idea more movingly than the National Memorial Cemetery of the Pacific, just north of downtown Honolulu. Here in the crater of a long-dormant volcano, more than 49,000 men and women who died while fighting in the Pacific Theater are buried. https://www.cem.va.gov/cems/nchp/nmcp.asp

If they are open for civilian visitors, drop in at Hickam Field, Wheeler Field, Fort Shafter, and Schofield Barracks on Oahu and see bullet marks in some of the buildings’ walls made by the strafing Japanese planes. Fort Shafter is the oldest U.S. military base on Oahu, completed in 1907, and looks identical to the way it did on December 7, 1941. Japanese attack aircraft strafed Schofield Barracks, the largest Army base outside the continental United States and home to the 24th and 25th Infantry Divisions, while on their way to bomb Wheeler Field and Pearl Harbor. At the museum dedicated to the 25th Infantry Division, you will find World War II photos, tanks, and weapons. Aviation.Hawaii.gov

One thought on “Oahu’s Museums and Memorials”